For lease for a while: How is Osborne Village dealing with its vacancy issue?

Osborne Village has always been a unique collection of shops and restaurants in Winnipeg. Today, though, you'll find a lot of empty storefronts. So is the former 'best neighbourhood in Canada' facing a vacancy problem?

Over a Friday lunch hour, Candy Lam is nimbly climbing a ladder, stocking buckets of Nutella on high shelves. She's just finished a catering order, and is now working to feed a hungry noon crowd at Kawaii Crepe, the restaurant she owns with her husband in Winnipeg's Osborne Village.

With a lineup forming and cooks constantly pouring crepe batter onto hot pans, it's almost hard to believe Lam when she says she's noticed a downturn in patronage.

"There's so much change in the last two years. It's unfortunate," she said.

"Before, we had a lot of foot traffic. They'd walk past and see us, come in and try. If you don't have loyal fans, it's really difficult to survive. The vacancies are a concern for Osborne Village because it's the most desired place to live."

Osborne Village was once deemed the best neighbourhood in Canada. But just six years later, the Village is facing a vacancy issue.

Drivers who use Route 62 — also known as Osborne Street north of the Red River to St. Mary Avenue — to get into and out of the downtown core have seen a growing number of empty storefronts and "for lease" signs dotting the main strip.

"To me, it doesn't make sense," said local Harry Finnigan, an experienced city planner and a former City of Winnipeg planning director.

Finnigan has lived in the Village for about 15 years, and worked on planning for the neighbourhood during his time with the City of Winnipeg. He's also involved with the Gas Station Theatre, at the corner of Osborne and River Avenue, on a volunteer basis.

With all this experience, he's still puzzled by the vacancies, pointing to the popularity of a couple of his favourite Osborne Village spots.

"Little Sister's coffee, it's hopping all the time. My favourite restaurant in Canada is Segovia and you can't get a table there," said Finnigan.

"It's not like Osborne Village can't attract people. It can and it does, and it can work for businesses. So why we have this vacancy rate, I'm dumbfounded."

​Buildings in Osborne Village are owned by different landlords. Basil Lagopoulos owns several properties in the area — most notably, the former Desart and Basil's spaces. He and his wife Donna opened Desart in 1968 and closed it in 2015. Both Desart and the former restaurant are now vacant.

Lagopoulos calls himself "the Godfather of the Village," as he's seen it grow from its infancy. He says the Village is in the middle of a transition period. But unprepared business owners, he says, are partly responsible for the vacancies.

"There are a lot of wishful thinkers, and I think a lot of people have been burned as a result of wannabe billionaires of the future," he said.

"The landlords are not going to be taking a hit from people that have some dreams and aspirations … when they're not capitalized and don't have more than one month's rent of funds available to them in case things don't go their way."

The Basil's space was most recently occupied by a short-lived restaurant called Ward 1, which closed in February.

Lagopoulos says he's close to renting out his space, and is in negotiations right now.

With that in mind, the BIZ says there's a lot coming this summer. The business organization reports that a new tenant is lined up for the old Second Cup location on River Avenue and Osborne Street.

A young entrepreneur has bought the strip mall where Jekyll & Hyde's Freehouse is, at the corner of Stradbrook Avenue and Osborne. Some of the shops there have renewed their leases, but there are hopes to bring in new boutiques and coffee shops.

The old TD Bank branch on Osborne will see a cannabis dispensary going into the space this summer. A sign in the former Basil's restaurant space, at the northwestern corner of Osborne Street and Stradbrook Avenue, simply says "Soon."

And finally, there is a tenant lined up for the former Osborne Village Inn.

There were reports last year that Fusion Capital Corporation, which owns the building, planned to reopen with furnished "micro-apartments" on the upper storeys and commercial tenants on the main floor and in the basement, but that plan was scrapped, according to a Winnipeg Free Press report.

The BIZ now says it's going to be a food and beverage business, and there will be some sort of activity attached.

In the meantime, Finnigan says the vacancies create a distorted picture of Osborne Village for some.

"Anybody who doesn't take time to walk in the Village and is just driving through, they'll just see vacancies, which gives the sign that it's a neighbourhood that nobody wants to be in. That's a myth," said Finnigan.

"Those vacancies don't tell the story of Osborne Village." 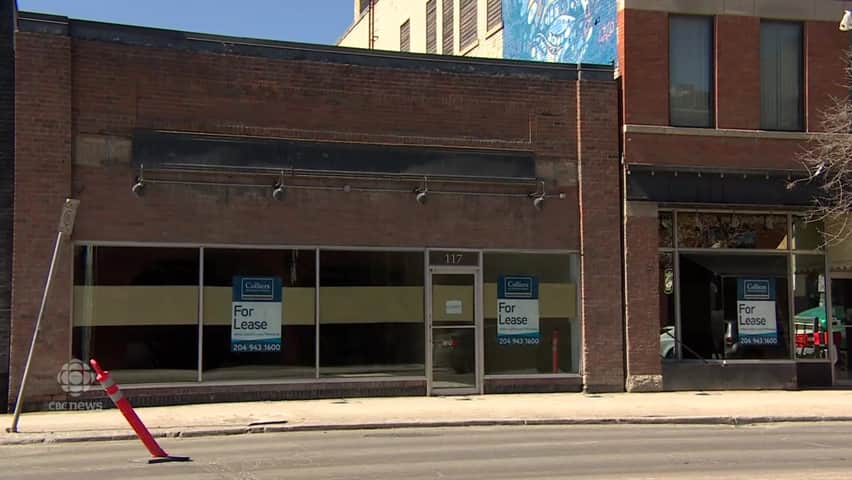 How is Osborne Village dealing with its vacancy issue?

3 years agoVideo
1:50
Business owners and locals are noticing an increase in empty storefronts and "for lease" signs on the main strip. 1:50