A Winnipeg man wants more grocery stores and restaurants to give their leftover food to charity instead of tossing it into Dumpsters, after a recent experience with Tim Hortons.

Rory Springman had been taking leftover Tim Hortons food to Siloam Mission, but the restaurant backed out

A Winnipeg man wants more grocery stores and restaurants to give their leftover food to charity instead of tossing it into the garbage, after a recent experience with Tim Hortons.

It started over a year ago, when Rory Springman noticed dozens of croissants, bagels and doughnuts still in the glass case when the Tim Hortons kiosk at Kildonan Place closed. He asked about it — thinking of people who are hungry in Winnipeg — and staff told him they were destined for the garbage.

Springman took his idea to Siloam Mission, who gave him written permission to take the leftover food there, so each day for over a year he's collected a haul that would've been thrown out and taken it to the Logan Avenue shelter and soup kitchen.

"I mean, for an extra 45 minutes of my day to an hour of my day on max, a lot of food was not going to waste, and that was why I did it," said Springman, who runs the Kernels popcorn store across from the kiosk. "There's hungry people out there and they want food and they're not picky."

He usually hauled three to five 17-litre containers full of doughnuts, Timbits, 20 to 40 muffins, croissants and upwards of 30 bagels. Some of the shelter visitors started calling him "Cookie Monster."

"The people at Siloam loved it," he said. "They absolutely loved it."

But staff recently stopped giving him the day-olds, saying they'd been told by management they had to end the practice.

"I was just told that there would be no food being left for us anymore … which is fine, it's their decision, it's their business … but now it's just going in the trash every day."

CBC News reached out to the store to find out why the arrangement was stopped, but were instead directed to Tim Hortons' head office.

Tim Hortons hasn't responded, but the Tim Hortons website says the company donated 5,500 kilograms of food to charity in 2014.

'It really makes me sad'

Staff at Siloam Mission said the bagels and doughnuts added variety to their breakfast service.

"What Rory does is awesome," said Chris Buffington, Siloam's food services manager. "It makes our job a lot easier knowing that hey, we're going to have pastry coming in on a regular basis, so it's something we're going to serve and plan for."

Everyone got excited about the Tim Hortons treats when they were served with breakfast, and kitchen volunteers would cut them up and add them to things like toast, fruit and oatmeal.

"I'm sure a lot of our guests are going to miss that, which is just too bad."

Shortage of some items

About 95 per cent of the food the Siloam Mission serves at its daily breakfast, lunch and dinner for those in need comes in the form of a donation, Buffington said.

Still, there's a shortage of particular food items, especially at this time of year, such as produce and dairy products like milk, cream and yogurt.

"We see a lot of waste in grocery stores and that's things we could be taking, using and serving to people in need," he said. 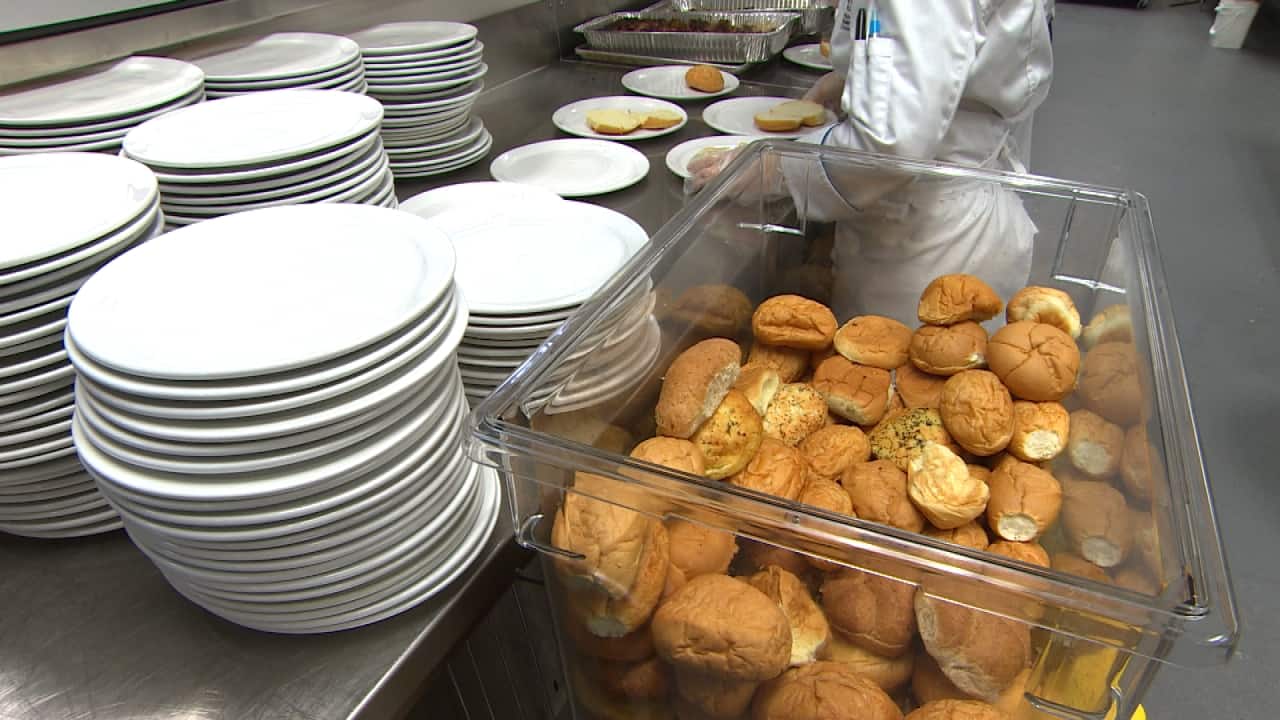 3 years ago
2:18
A Winnipeg man wants more grocery stores and restaurants to give their leftover food to charity instead of tossing it into the garbage, after a recent experience with Tim Hortons. 2:18

Stores and restaurants can call them to see what Siloam can take before throwing food out, because they might not realize the kitchen can use milk at its best before date. Kitchen staff inspect the food, report to the health inspector and ensure it's safe to serve before it goes out.

"When I see large amounts of food going out like that it really makes me sad."

Some stores are reluctant to donate leftover food because they worry about someone getting sick, but there are laws that protect people who give food in good faith, including grocery stores and restaurants, Buffington said.

In Manitoba, the Food Donations Act protects donors from liability.

"They can find out hey, we can donate, as long as we're not donating things like rotten food and trying to get people sick on purpose," Buffington said. "Every single province across Canada has legislation like that."

And if Siloam Mission has an abundance of a particular item, they'll share with other charities.

Springman hopes his story will help others take a second look at the food they're throwing out and think about donating it to people who are hungry.

"There's just so much food in every city that goes to waste every day," he said. "It's disgusting. We've got hungry people, we've got food. Somehow these two should be paired together. It seems so simple."

For the time being he hasn't stopped visiting Siloam Mission, taking two big bags of freshly-popped popcorn each weekend for their movie night.