Flooding farms in order to flood-proof cities: The tricky balance of controlling the Red River

Farmers whose property will find itself in the middle of a multibillion-dollar man-made flood plain say there has to be a better way to protect the 230,000 people living downstream in Fargo, N.D., and Moorhead, Minn., from the Red River.

Construction could resume shortly on $2.75B flood diversion project in North Dakota and Minnesota

Matt Ness's farm near the Red River in rural Minnesota has never flooded since his family started farming there in 1941. But now the property is slated to be flooded on purpose — and potentially often — to protect two cities 30 kilometres downstream.

The 2,500 acres he farms, located south of Fargo, N.D., and Moorhead, Minn., is in the middle of what will become a retention area for floodwater once a multibillion-dollar diversion project is constructed. A 50-kilometre channel will usher overflow from the Red River around the flood-prone Fargo-Moorhead area.

"It puts us in a tough situation," said Ness. "A lot of unknowns as far as how it's going to affect us, our neighbours, the farming community."

Fargo is the last and largest urban area in North Dakota that doesn't have permanent flood protection from the Red River. The Red, which flows north and cuts between Minnesota and North Dakota, rises every spring and has historically caused major flooding in Grand Forks, N.D., and farther downstream in Winnipeg.

Fargo has managed to avoid disaster — but just barely. The city was pushed to its flood-fighting limits in 1997, 2009 and 2011. Officials estimate damages could run upward of $18 billion if the city were to experience a catastrophic flood today.

For the past decade, officials have been navigating tricky regulatory, legal and political issues as they to try to build the diversion project. It's complicated given the fact the river cuts through two cities, in two different states, and requires agreement and funding from both of the cities and states, as well as the federal government.

The challenge is similar to what officials could face for any cross-jurisdictional, flood-mitigation projects in Ontario, Quebec and New Brunswick.

While the $2.75-billion Fargo-Moorhead diversion project continues to clear legislative and funding hurdles, people whose homes and property will be placed in the path of the man-made flood plain argue there has to be a better way to protect the 230,000 people who live in the metro area.

"We don't believe that it's right to start to stage water on areas of land that don't flood, to protect land that currently floods," said Minnesota farmer Mark Askegaard, a colleague of Ness's at the MnDak Upstream Coalition, a group that opposes the diversion plan.

'Farming is a way of life'

Construction on a section of the diversion in North Dakota started in 2017 but was halted by a legal injunction launched by Minnesota. A judge modified the injunction last month, allowing construction to resume. The project also recently secured an additional $480 million from North Dakota and the federal government.

Work is projected to take 6½ years and could resume in the next 30-90 days. If completed and operated as planned, 90 per cent of Ness's land will be at risk of flooding.

Ness is in the process of taking over the farm from his aging father. He's been holding off on moving his family to the property. Just a few months ago, his parents received notice they'd be required to sell their home to the Fargo-Moorhead Diversion Authority and move out. They would have to live elsewhere but could possibly still farm there.

"Farming is a way of life," Ness said. His father has lived on the farm his entire life.

"The connections to the area, the land, the farmstead. It's just tough not knowing where it's going to go from here."

Frankly, what works in Grand Forks, or works in Winnipeg, may not work somewhere very close by.- Rocky Schneider, spokesperson for the Fargo-Moorhead Diversion Authority

The MnDak Upstream Coalition isn't convinced the diversion authority has fully accounted for all the potential impacts and problems the project will cause upstream. The group is particularly concerned about how affected families and businesses will be compensated if their properties are damaged or no longer usable.

They say the diversion authority hasn't been able to tell them how much money they would receive for not only their homes, but all of the buildings and amenities they've built on their farms.

They are also concerned for people who will have to live elsewhere but plan to continue farming their land. They say it isn't clear how compensation will work if a farmer's property is used for water retention.

For example, water retention wouldn't last the entire summer, but the debris that's left behind could potentially delay seeding. Askegaard says many farmers have contractual obligations for delivering crops, and any delays would cause major financial strain.

"I'm not arguing that Fargo doesn't need a diversion, but I think the scope of the project can be downsized. And if they do that, and they don't protect so much undeveloped flood plain, there will be fewer impacts upstream of the project and probably totally eliminate all the impacts to the state of Minnesota."

Fargo Mayor Tim Mahoney says the diversion is essential but some people forget why the sacrifices of some are necessary.

An hour north of Fargo, and downstream on the Red River, is Grand Forks, N.D., and East Grand Forks, Minn. — two communities where many residents know the devastation of floods first-hand and have taken action to try to prevent them permanently.

That's what Jon Bonzer's sister-in-law said after he pulled into her driveway in Fargo in the spring of 1997. His family and more than 50,000 other Grand Forks and East Grand Forks residents had to flee their homes after levees failed and more than a metre of water flooded both communities.

After the evacuation, a fire broke out in downtown Grand Forks, destroying 60 apartments and 11 historic buildings, including Bonzer's pub.

"The real kick down here was watching our business burn down, on TV, from 80 miles away," he said. "It was difficult."

Weeks later, when he was finally able to return to the community, he already knew his business was gone, so he went to check on his house. He says he didn't open his eyes until he was standing on the main floor and could tell his feet weren't in water.

"I just got on my knees and said, 'Thank you,' because I was overwhelmed that I had a house that was standing. I had eight feet of water to remove from the basement, which was a monumental task, but the alternative would have been I would have lost the house as well."

Bonzer could be considered one of the lucky ones. More than 2,500 homes and structures were demolished, moved or voluntarily bought out — some as a result of the flood damage and others to make room for permanent flood protection infrastructure.

Grand Forks city councillor Ken Vein, who worked as a city engineer during the flood in 1997, says difficult decisions had to be made and certain areas could not be redeveloped.

"We had to correct a lot of planning and the implementations from years past. We had an opportunity to do it right and that's what I think we accomplished," he said.

At the time, the city looked at the Winnipeg floodway as a possible option but decided it would push urban problems onto rural areas, Vein said. Officials also decided it would be too costly for a smaller city to do a project of that scale, including purchasing the necessary land, he said.

So Grand Forks decided to push neighbourhoods and development back from the river to create space for a small amount of water retention and a system of flood walls and earthen levees. Instead of those buildings along the riverbank, there are now several parks, a campground, two golf courses, three disc golf courses and more than 30 kilometres of multi-purpose trails.

Back on the farm south of Fargo, Ness says he knows flooding needs to be mitigated along the Red River, he just thinks there is a better way to do it that could impact fewer people. He points to the dike system in Grand Forks as a possible example.

Rocky Schneider, spokesperson for the diversion authority, says while Grand Forks is a great example of flood mitigation, Fargo is not in a position to do the same thing.

"Frankly, what works in Grand Forks, or works in Winnipeg, may not work somewhere very close by."

Fargo Mayor Tim Mahoney says despite a few remaining hurdles, the diversion project is finally on the right track.

"Right now, we're in the best position we've ever been in," he said.

Ness says he's holding out hope that one of those last few hurdles can change the project's course. If not, he'll have to decide whether this project puts his family out of farming forever. 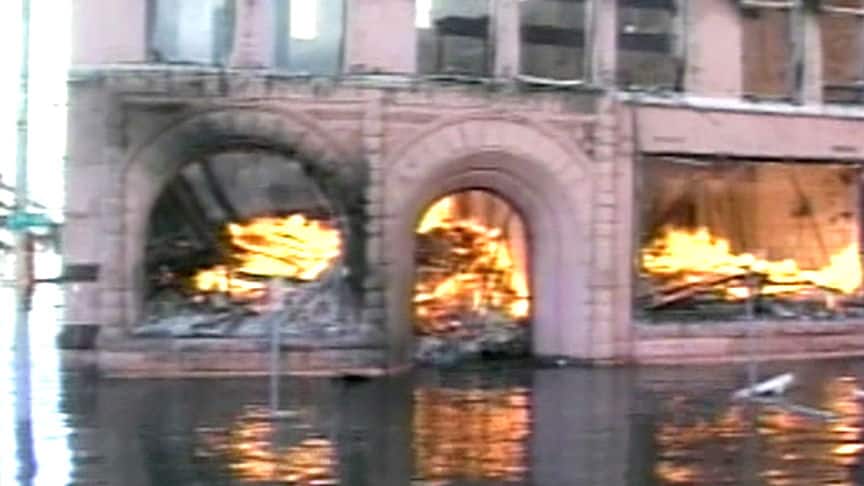 Fighting floods on the Red River

2 years agoVideo
5:02
The $2.75 Billion Fargo-Moorhead diversion project along the Red River Valley is set to save some 230,000 people in the metro area but pushes others into the floodplain. 5:02