The Manitoba government has started a controlled breach at the failing embankment on the Birdtail Creek. 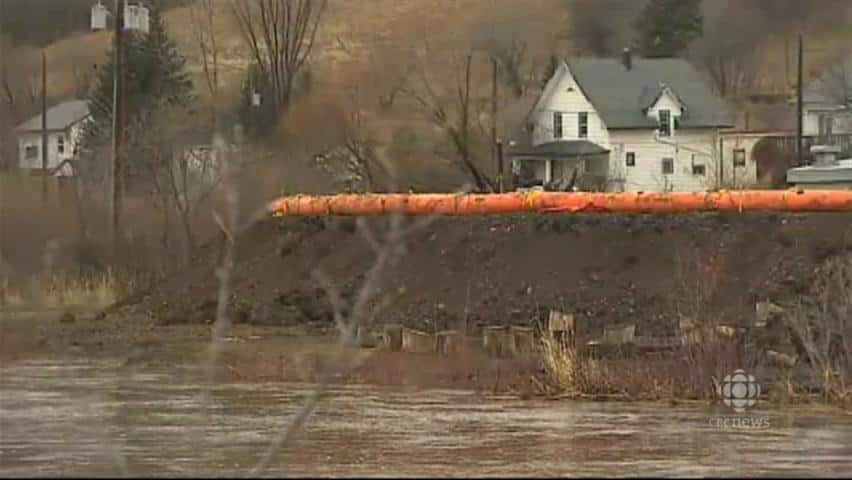 6 years ago
2:11
Birdtail Creek embankment erosion forces over 60 to evacuate 2:11

The Manitoba government has started a controlled breach at the failing embankment on the Birdtail Creek.

The province intentionally cut the crumbling dike that is threatening to flood several communities with a surge of water in the western part of the province.

Manitoba Infrastructure and Transportation announced Monday night that it would make the cut.

In a news release, officials said they hoped to draw down as much as 1½ metres of water safely and reduce the pressure on the eroding earth embankment, which has been acting like a dike on the creek but started failing late last week.

McNeil said the embankment has been eroding due to a frozen culvert that isn't allowing water through to ease pressure on the embankment.

"There was a second slide that was reported this morning, very close to the first slide near the top of the embankment on the downstream side," he told reporters. "It is a dangerous situation."

Plans to cut the embankment are being made in consultation with the Town of Birtle, the Waywayseecappo First Nation and the Rural Municipality and Town of Rossburn, according to the province.

Meanwhile, crews continue to work on establishing pumping operations in the area.

"Together, pumping and a controlled breach will help lower water levels and protect a weak seam along the embankment. This may reduce the overall risk of embankment failure," the province stated in a news release Monday evening.

Earlier on Monday, Premier Greg Selinger met with officials in Birtle, where 20 homes in the town and surrounding area have been evacuated as a precautionary measure. So far, 43 people are away from their homes in that area.

Ron Bell, the emergency measures public information manager for both the town and the RM of Birtle, has said the flooding could begin at any time, so crews have raised earth dikes and put temporary tube dams in place.

1 of 0
He said there was positive news as of Monday morning — it appears the crest of the flooding creek has passed.

"That's good news for us because every foot the water goes down it gives us an extra foot of capacity when the [dike breaches and the] water comes," Bell said.

In the afternoon, Selinger visited Waywayseecappo, where 64 people were forced out of 12 homes and a seniors' residence as a precaution. Most of the evacuees are at a hotel in Russell, Man.

Waywayseecappo First Nation Chief Melville Wabash worries about a number of essential buildings that could be flooded.

No evacuations have taken place to date at the Birdtail Sioux First Nation, but Chief Nelson Bunn said he is keeping a close eye on the "Birdtail River," as he now calls the creek.

Portions of the reserve are being flooded, but in areas away from homes.

At the request of the Waywayseecappo chief and council, the province is sending out "super sandbags" as well as regular sandbags to help further protect the community.

Selinger praised the resiliency of the community and commitment of volunteers and emergency measures staff.

The Assiniboine River is also facing flood warnings between the Shellmouth Dam and Brandon, Man.

The province warned that virtually all points along the Little Saskatchewan River and Fisher River are at risk of imminent flooding. Smith Creek plus streams in the Interlake region — including the Icelandic River — are facing high water advisories as well.

Although the Fisher River, which flows through the First Nation, has crested and is starting to go down, water depths remain high at around three metres — close to twice as high as normal — with some worried that rain predicted to fall over the next few days could worsen conditions.

At least 131 people were forced to leave their homes over the weekend, as the swollen river washed over its banks and surrounded homes.

The federal Aboriginal and Northern Affairs Department says 49 of the flood evacuees are staying temporarily at hotels in Winnipeg, with the rest staying with friends or family members in the community.

"We are working closely with Peguis First Nation to determine their needs, develop work plans, ensure that emergency plans are in place," a department spokesperson stated in an email Monday.

Betsy-Jane McCorrister and Aaron Hart are waiting things out in a Winnipeg hotel. The couple usually lives with McCorrister's parents and little sister in Peguis, but the rising water forced them out late last week.

"We were being told the water is going all over the road and everything. When we got there, we saw what they meant," said Hart. "You couldn't even see the road — it was just right under water."

A few years ago, McCorrister said flooding kept her family out of their home for two months.

"It's lonesome. Like, we see our nieces every day and we miss them," said McCorrister.

Peguis Chief Glenn Hudson said officials on the First Nation are watching the water levels after a hectic weekend of sandbagging.

Hudson said if there is a lot of rain, it could put more homes at risk.

"We did have 28 homes protected. We'll be assessing that today now that it has dropped somewhat, but given that the rain is coming it may raise the level of the river," he said.

Peguis resident Nicole Sutherland's house is not at risk of flooding right now, but the water has left her with contaminated drinking water and sewer backup.

Sutherland said road access to her house was also cut off by the rising water a few days ago, but band officials tell her it is Aboriginal Affairs that is refusing to approve the evacuation of her home.

"I've been having to haul water to the tub for the kids and just really trying to keep up with the mud and the sewer problem in my house," said Sutherland. "With five little kids … I think we should have been on a priority list to be out of here."

There are plans for more permanent flood-proofing, such as raising roads, but that work has yet to begin, Hudson said.

"And the long term solution is to have, like a causeway, that would take off the headwater from the river and divert it away," said Hudson.

Hudson said this is the seventh flood his community has had to deal with in five years and they did the best they could this year with the resources they had.

Hudson said he asked the federal government for $2 million for flood preparations, but only received $2,000.

Permanent flood protection is expected to cost $90 million. The First Nation has already spent $35 million on temporary protection over the past few years battling incessant floods.

The Aboriginal and Northern Affairs Department says it announced a "comprehensive single-window approach to emergency financial arrangements" in November that will "ensure prudent management of taxpayer dollars and provides First Nations and provinces and territories [with] improved access to emergency funds when needed."