'Foolish not to': Manitoba First Nations want in on legal pot sales

Jobs, economic development an opportunity not to be missed say 3 chiefs, teaming with National Access Cannbis

"Although the cannabis industry might not be the saviour for our First Nations, Indigenous people, it will go a long way in helping provide sustainable development in the years to come," he said. "Our people need to work. We need to lift our people out of poverty ... the struggle for economic independence is real."

NAC and the three First Nations are finalizing a proposal to be one of the province's licenced retailers.

OCN Chief Christian Sinclair said if they get the green light, all locations will open simultaneously on July 2. He said OCN will open a NAC store in the Otineka Mall.

The plan is to open up shop on urban reserve land and on First Nations, which will also create jobs.

Long Plain hopes to have three locations: at the Madison Reserve in St. James, at its urban reserve in Portage la Prairie and in its community.

"The No. 1 question we are getting from our young people is jobs," said Meeches. "So that is where we need to put a lot of our effort into, strengthen our economy going forward. We would be really foolish not to be involved in this particular economy."

Peguis Chief Glenn Hudson didn't specify future locations but said land at Kapyong, Assiniboia Downs and a number of locations around Winnipeg is all on the table.

"We want to look at the cultivation, the distribution and the retail," said Hudson. "I think us as First Nations should have that ability to partake in all of those sectors of this industry and we should also get a set aside because it is an indigenous product and we are an Indigenous people."

All three chiefs would like to see a tax rebate program on cannabis sales, similar to tobacco and gas sold on First Nations land.

"We are lobbying that presently with the federal government and working with the province on how that will roll out because it is a treaty right as well," said Sinclair.

He said NAC should find out from the province if their joint proposal is successful by the end of January.

Goliger said more First Nations partners will be announced in the coming weeks. 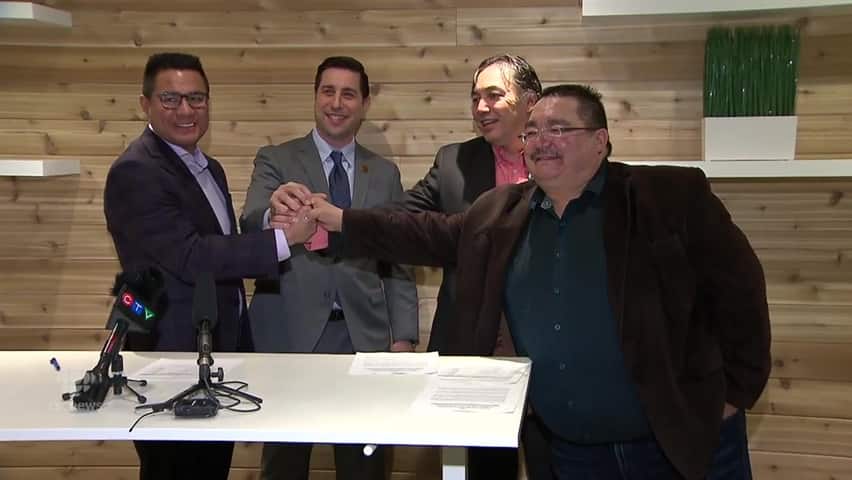