Winnipeg police are investigating allegations a financial adviser took advantage of a Manitoba senior with a cognitive impairment.

A Winnipeg financial adviser is under police investigation for allegedly manipulating his cognitively impaired 78-year-old client into lending him $200,000 under "false pretence," according to documents filed in court.

Aime Edmond Grenier, 50, is accused of using his relationship with the senior to borrow hundreds of thousands of dollars dating back to 2009. None of it has been repaid.

CBC News is not revealing the identity of the 78-year-old man, who police describe in court documents as independently wealthy, generous and susceptible to manipulation.

In June, police got a court order to search Grenier's bank records and credit card statements. In a sworn affidavit to a judge, officers said the investigation began last summer after the senior reported that $100,000 he had invested was gone. Police looked into the complaint and found the money wasn't missing but had been moved to another investment by Grenier, the man's "financial adviser," the affidavit said.

But that wasn't the end of the police probe.

"Recently, events have come to light which suggest that Grenier may have been exploiting [the man's] vulnerabilities, generosity and wealth for his own benefit," said Det.-Sgt. Trevor Thompson in the June 28, 2018 affidavit.

The senior suffered a brain injury in a 1977 car crash that killed his daughter. Since then, he has been receiving $18,000 a month tax free, the affidavit said.

It was "obvious" when the detective sargent met with the man that he "was suffering from some sort of cognitive issue," the affidavit said.

"The lasting effects of his brain injury leave him overly trusting, generous and sometimes confused and forgetful regarding financial matters," Thompson said in the court documents.

Police said their investigation was focused on a substantial loan Grenier allegedly got "under false pretence."

According to the affidavit, Grenier went to the senior's home on Nov. 23, 2016, asking to borrow $200,000 he said he needed to pay the Canada Revenue Agency (CRA). But police allege that a search of Grenier's financial records showed only a fraction of that money went to the tax man.

Among other things, police alleged Grenier used the $200,000 for the following:

"I believe this loan was obtained by a false pretence, namely, Grenier misrepresenting the amount of money he owed to CRA in order to manipulate a generous, vulnerable client with significant means to provide him the $200,000 loan he otherwise would not have," said Thompson's affidavit.

"I believe Grenier had full knowledge that [the man] would not have provided the loan had he known it was for uses other than making a payment to CRA," wrote Thompson.

"In my experience, often the root cause of individuals committing financial crimes, whether it be by way of theft or fraud, is an addiction or vice of some kind," the affidavit said. "I believe in this instance, Grenier likely has a significant gambling problem as evidenced by his constant use of online poker sites."

Grenier has not been criminally charged and none of the allegations against him have been proven in court. Police would not say if charges are pending, just that the investigation is ongoing.

The man told police he met Grenier in 2003 when Grenier sold his wife a life insurance policy, the affidavit said. It also claimed Grenier had been handling the man's finances since 2008 and that the man had considered him a friend.

In January, the senior filed a civil lawsuit in the Manitoba Court of Queen's Bench seeking damages from Grenier and repayment of the loan.

The statement of claim said "as a result of his cognitive limitations, limited investment experience and business acumen" the man suffered "hardship and loss" because he was "incapable of fully appreciating and independently evaluating the investment advice and recommendations."

The man alleged in the lawsuit that under Grenier's guidance and recommendations, he invested $480,000 in "start up" companies, and suffered significant losses because he wasn't fully advised of the risks involved.

The man claimed Grenier sold him nine life insurance policies and advised him to take out a 20-year investment loan even though he was 78 years old.

Grenier shot back in a statement of defence denying all the allegations against him, and also the man's claims he is cognitively impaired.

"The plaintiff, who was by no means vulnerable, relied upon his own judgment and the terms of the investments, policy and loans, which he agreed to," Grenier said in a statement of defence.

Grenier did not respond to requests for an interview but gave a statement through his civil lawyer Jeff Baigrie.

"In respect of the [victim's] claim, our position is set forth in the statement of defence. Any further comment will be direct to the court," the statement said.

In the information to obtain a search warrant, police quoted from a letter written by Grenier to his client, in it, he says he intends to pay the man back.

According to Grenier's social media, he has been working as a financial consultant for 28 years.

But the Manitoba Securities Commission (MSC) said Grenier is not licensed to sell financial products such as stocks, bonds, mutual funds and scholarship plans.

​Grenier was previously licensed to sell scholarship plans between 2010 to 2015 but is no longer registered with the MSC.

The Insurance Council of Manitoba said until recently Grenier was registered to sell life, accident and sickness insurance policies.

In August 2016, Grenier was investigated and fined $1,000 for selling a life insurance policy to a client using a business name he had "never been licensed to represent."

Two years later, Grenier was sanctioned again after the senior who reported allegations to police complained to the ICM.

"Mr. Grenier is unable to practice as an agent for a year and because it's a year and one day he has to totally re-qualify to be an agent in the future if he wishes to do so," said Heather Winters, director of licensing and compliance at the Insurance Council of Manitoba.

Despite that, the man doesn't feel the punishment goes far enough.

"I trusted Aime Grenier and believe my trust was misplaced. I am seeking damages in court to try and recover my money. I also believe that the Insurance Council's decision to only suspend Mr. Grenier's life and accident and sickness licence for one year was not good enough," the senior said in a statement to CBC News.

Winters said if Grenier were to get his license back, he would also have to take extra ethics courses and find someone to supervise his work for a year.

"You must also understand that simply because it's a suspension doesn't mean the Mr. Grenier will automatically be reinstated at the end of the year. There is a full process which will have to be met. He has to meet the requirements of a decision, plus there will be an issue of suitability when he reapplies," said Winters.

"In this case we've added all sorts of additional requirements for him, if he wishes to re-qualify. Obviously even if it's cancelled the individual has an opportunity to re-apply. In this case we set out a minimum deadline in which he cannot act as an agent," said Winters.

She said all disciplinary decisions are posted on the council's website, and encouraged consumers to do their research before signing a contract. 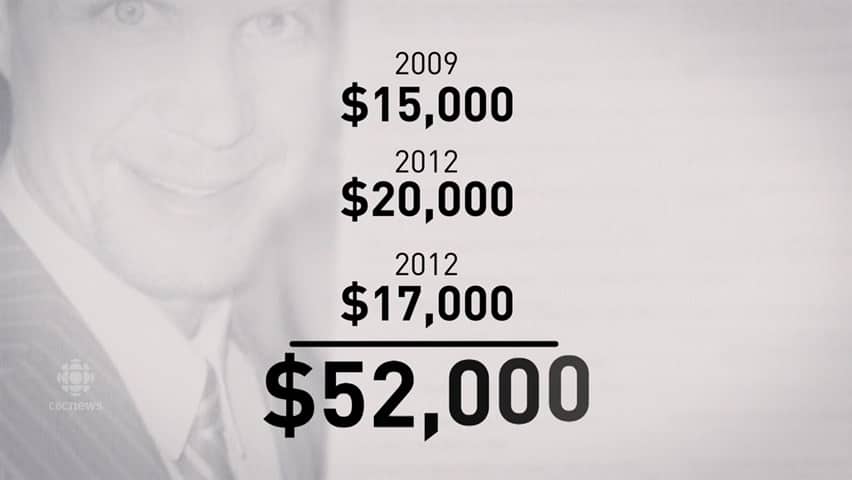 2 years agoVideo
2:10
Aime Edmond Grenier is accused of using his relationship with the senior to borrow hundreds of thousands of dollars dating back to 2009. None of it has been repaid. 2:10