'There's no shame in being who you are': Photographer explores Filipino 'bakla' culture

In a portrait series commissioned for CBC's Creator Network, Ally Gonzalo photographed members of the bakla community — a Tagalog term including people who identify as trans, non-binary or bisexual — and spoke to them about coming out to their Filipino families. Here are their stories, along with Gonzalo's portraits.

Bakla (Tagalog) — a Filipino person assigned male at birth but may have adopted mannerisms traditionally regarded as feminine. The term includes individuals who identify as trans, non-binary, bisexual, etc. While most bakla are attracted to men, collectively referring to them as "gay" would be inaccurate as some self-identify as women.

In a portrait series commissioned for CBC's Creator Network, Ally Gonzalo photographed members of Winnipeg's bakla community, and spoke to them about coming out to their Filipino families. Here are their stories, along with Gonzalo's portraits.

I am proud to call myself bakla, but it wasn't always that way.

Bakla used to be such a loaded word for me.

When I was younger — about eight or nine years old — my father and I were walking to my Lola (grandmother) Bebot's house from the palengke (public market). He noticed that my gait was too soft, too slow, or too something for his pace. He yelled at me: "Bakit ambagal mo maglakad? Bakla ka ba?" ("Why do you walk so slowly? Are you bakla?"). Shocked by his sudden outburst of anger, I stuttered "no."

For such a long time, I flinched whenever I heard the word "bakla."

That word was a trigger to me. My response? I automatically masculinized the way I spoke and carried myself because the last thing I wanted was to attract attention towards myself for "acting bakla."

I came out to my friends in my late teens. On my 22nd birthday, six months before immigrating to Canada, I came out to my family. I was lucky. My family supported me and I wasn't shunned from my social circles. Many others are not accepted or supported.

The fact that I moved to a relatively liberal, Western country was definitely a factor in accepting myself because I saw how queer folk in Winnipeg had fewer hesitations, in general, with expressing themselves.

Coming out to people I've met in the Philippines always garnered responses such as"'eh hindi ka naman mukhang bakla," ("but you don't look bakla!") or "ay sayang, gwapo ka pa naman," ("ah, what a shame, because you're actually handsome").

When I first came out to someone in Canada, I felt weird because I didn't get shamed. My self-identity was just a matter of fact for them. Where was the shaming and denigration that I'd come to expect?

My own reaction to the non-shaming startled me. It jump-started some serious introspection about myself and how I self-identity.

I am now 25 years old. I have reflected on my past, and especially my youth. Today I embrace who I am and consider myself a proud member of the Filipinx diaspora — the collective term used by queer Filipino immigrants, first-generation and beyond — who've settled in the West.

In Winnipeg, there is a thriving bakla and Filipinx community. We are here and we are an important part of Winnipeg culture. Even though I am a triple minority in Canada — a queer, brown immigrant — I'm fortunate that the people I surround myself with are loving and accepting.

And yet, I also want to connect with more bakla in Winnipeg. I am tired of the lack of images in the media of male-identifying people like me who are brown, queer and fat. So I decided to photograph these folks to subvert the conventional ideas of what a queer person should look like and how they should behave.

It wasn't easy for everyone to open themselves up for the project. I want my fellow bakla, and everyone else in the queer spectrum, to know that there is no shame in being who you are.

We aren't all the same and my portraits are a celebration of our diverse identities.

What l did only scratches the surface, but it's definitely a step in the right direction. I will use my privilege to advocate for acceptance not just tolerance. It's crucial because the only time having privilege is good is when it's used to uplift the marginalized, oppressed, and disenfranchised. 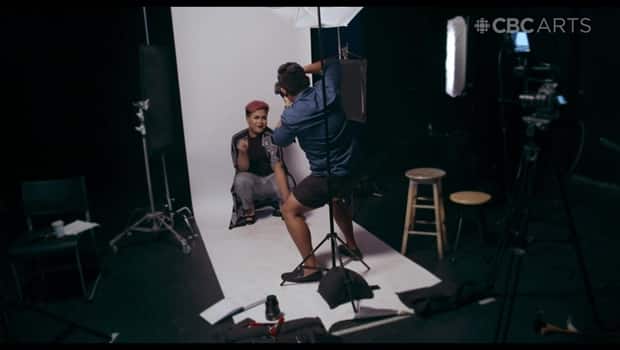 This is the way I am.

I've been hurt. There have been many painful moments in my life, both here and in the Philippines.

I am thankful for the painful experiences I've had. Because of that, I realized I became stronger. I became accepted and I love myself. I have to love myself.

To my younger Raffy: Live life a little bit more with ease.

Know that those people around you still love you to this day, that your parents will always be there since that's who they are.

They're not there to change you, they're there to adapt to you, and help you.

You can't dress bakla, and I feel like that's a really important point to reiterate. I feel like we (myself and Clarence) never would have gone out if we grew up in the Philippines. I feel like Canada is so amazing, and is so open that (our relationship) was possible.

Clarence: I definitely feel lucky to have lived in Canada as a Filipino bakla. I feel like Winnipeg is definitely a very open community and very progressive, which is nice.

We're not weak. Being bakla and effeminate, that kind of goes hand-in-hand (for people who don't understand). It doesn't mean that all baklas are feminine, but once you go to the feminine side they think you're weaker than everybody else.

I can probably lift more than you. I can endure more pain than you. Have you felt the pain of being isolated just because of something you don't have control over? (Being bakla) doesn't mean that you're weak.

It doesn't make you less of a person. It just so happens that you love a certain gender.

I really like to explore the different parts of myself because I feel like identity is an interesting topic.

Some people see different versions of themselves as separate entities. I feel like if I put water in three cups, it's still water but it's still in different containers.

When I finished at MC college as a makeup artist, I posted it on social media and I got together with friends.

I think that's when I felt like this is my final form. I felt like I was really embracing who I was because at that point I've come out to all my family members.

I was able to tell them I'm a makeup artist now and I'm working with this amazing company. Before that, I wasn't able to express those feelings so I think at that point I was able to feel very loved and accepted.

Just like you I just want to live a normal life.

Pole dancing is my first love.

I started pole dancing as self expression.

When I'm pole dancing, I feel like I'm living the non-binary definition.

If we just teach our new and current generations to just love who they love, it would be better.

If you love somebody, it doesn't matter if they're the same gender or whatever. That's your thing.

I want people to know that all that matters is what you feel and who you are. That's what I want.

It's good to be bakla. It really is. I want to take back that word. I want to put some positivity to it because I always feel like there's some sort of negativity to that word.

I want everyone to know that being a gay Filipino man in Winnipeg is really cool.

Ally Gonzalo is a Winnipeg-based photographer.