A note in history: How a Manitoba-made guitar tells the story of Festival du Voyageur

If someone were to tell the story of Festival du Voyageur without words, it might look and sound something like this guitar.

If someone were to tell the story of Festival du Voyageur without words, it might look and sound something like this guitar.

The instrument was commissioned to commemorate the festival's 50th anniversary and Christian Dupont was asked to build it.

"Since the festival is a celebration of music and culture, a guitar just fits in so perfectly," said Dupont, a Franco-Manitoban luthier — a person who builds and repairs stringed instruments.

"We're celebrating 50 years of our culture and our identity, and our music and our history, so for me this is just a chance for me to be able to contribute to that."

Dupont said the idea came about two years ago when a majestic elm near Fort Gibraltar was cut down and ideas on how the wood could be repurposed were being thrown around.

Pieces of that elm are now the tuning pegs for the guitar. The body is made from a Manitoba flamed ash tree, with a canoe-shaped bridge, and the guitar head is the shape of the province.

"If you've ever canoed down Manitoba rivers, [they're] just full of mature ash trees," said Dupont.

"That was a tree that the voyageurs at the time would have definitely been using in their camps and burning for firewood and using in their day-to-day life."

The sound hole is framed by dyed veneers in the design of a Métis sash, and the number 50 is inlaid in the fingerboard with the same material.

The nut and saddle, the two points that hold the strings, are made from local bison bone.

The strap is decorated with beaded leaves of cedar, ash and elm, as well as the music notes of the Voyageur song, Festival's official song.

"I wanted people to, when they saw the guitar … think this is for the Festival du Voyageur," said Dupont.

The inside label has been signed by members of nearly every official Festival family from the past 50 years.

This is the eighth guitar the 33-year-old has made and he estimates he spent about 300 hours working on it since last March.

"Honestly I lost track of the hours, I sort of stopped counting, it was more a passion project and just out of the love of doing it more than anything else," he said.

Dupont said the materials cost just under $1,000, but it would be hard to put a price on the finished piece.

"This is going to be able to be played by musicians and artists and hopefully make beautiful music and encourage people to keep writing, and keep playing, and just to keep pushing our music and our culture forward," said Dupont.

The guitar will likely end up on display within the Festival office, but after opening night on Friday it will be passed around among musicians during the 10-day festival, creating a history of its own. 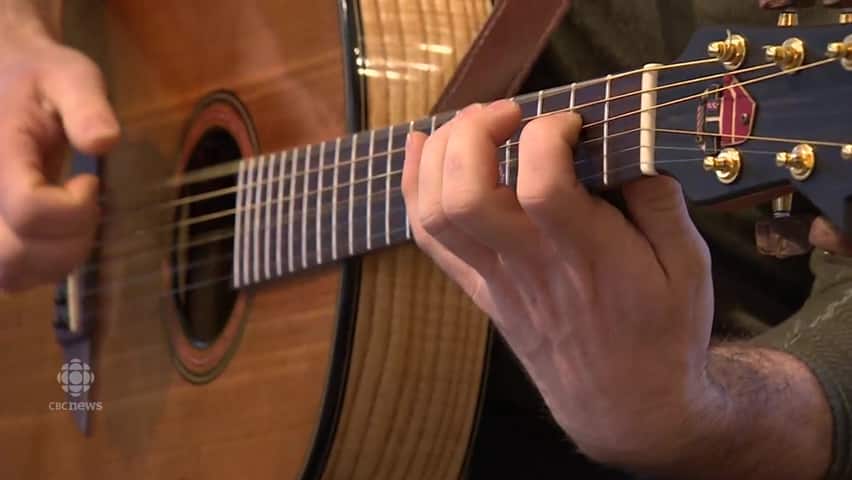 2 years agoVideo
1:39
The instrument was commissioned to commemorate the festival's 50th anniversary and Christian Dupont was asked to build it. 1:39