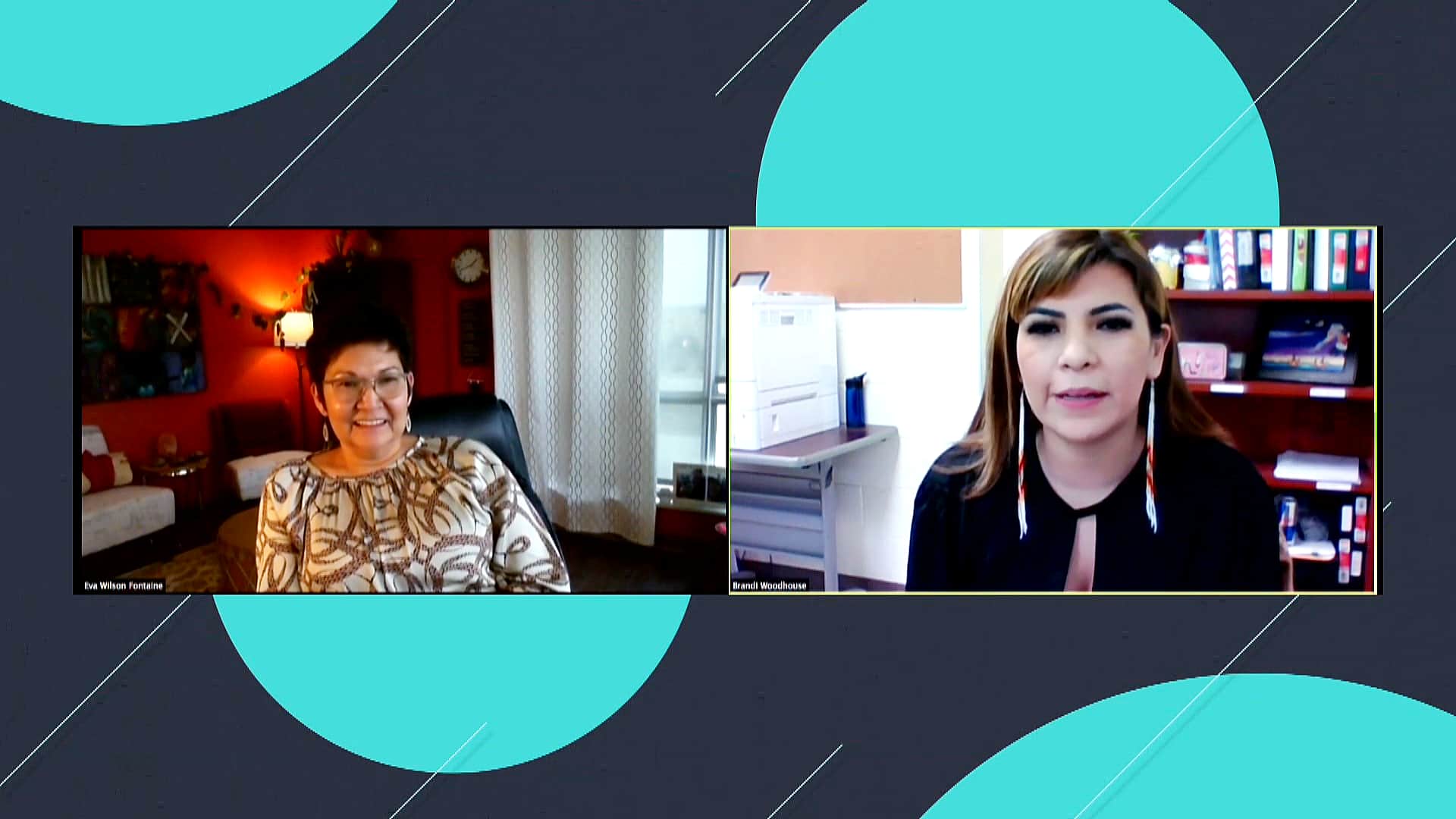 1 month agoVideo
2:26
Brandi Woodhouse is an Anishiniaabe Ikwe woman from Pinaymootang First Nation and she owns Rez Gal Lashes who paired up with Eva Wilson-Fontaine, a female business owner from Peguis First Nation who co-founded three different businesses with her husband all focused on the Truth and Reconciliation Calls to Action. This is the third in a series of conversations between iconic female leaders and the emerging entrepreneurs in Manitoba. 2:26

Manitoba has the largest Indigenous population per capita in Canada — a number that represents immense opportunities for the provincial economy.

A report released by the Royal Bank of Canada in June says that Indigenous-owned businesses represent a $30-billion economy in the next five years, and that the number of self-employed Indigenous people is growing at five times the rate of self-employed Canadians.

But according to research by Innovation, Science and Economic Development Canada, Indigenous people are underrepresented as business majority owners.

While Indigenous people make up 18 per cent of the province's population, only seven per cent of businesses in Manitoba are majority Indigenous-owned, according to the federal department.

For the third part of "The Icons and the Emerging" — a series about female entrepreneurship during the COVID-19 pandemic — CBC Manitoba brought together two accomplished female Indigenous entrepreneurs for a conversation this fall.

Eva Wilson-Fontaine is the co-founder of businesses focused on cultural awareness training, including Cedar Lake Ranch in Anola, Man.

She was joined by Brandi Woodhouse from Pinaymootang First Nation, who started RezGal Lashes this past summer, for a conversation on the challenges and opportunities facing Indigenous women in the province who have a dream of starting their own businesses.

Note: this conversation is a transcript that has been edited for clarity and length.

Brandi Woodhouse: I was really inspired that you're a First Nation woman and all you've done to pave the way for young Indigenous women that want to own a business. So I was really excited because of your experience with the businesses that you run — you are really established and I'm just starting out.

Eva Wilson-Fontaine: When the truth and reconciliation calls to actions came about, we [she and her husband, E.J. Fontaine] started doing more cultural awareness training with our company Amik.ca along with Anish Corporation, where we worked with Indian residential school survivors and their family members, Sixties Scoop, and those who attended Indian Day School.

Now, we are in the healing stages of our work and it's more focused on reclaiming our identity. We needed to create another kind of a space where people could actually be on the land and learn our culture in a gentle and safe way, because our elders tell us that we need to be on the land as there is healing that happens when we do — and so that's why we created Cedar Lake Ranch.

I remember when we started our first business, it was exciting because we were starting something from a foundation, a dream and a risk that we had taken. We said that we didn't want to live with any regrets and that we could always go back to our jobs.

Brandi Woodhouse: For me, starting RezGal Lashes actually just accidentally happened. I used to go into the city when I got paid and get my lashes professionally done. And when the pandemic hit, I didn't have that option anymore — salons were closed — so I was like, "OK, I have to find eyelashes and stock up on these."

And then I thought, "Why can't I also start a business?"

I went to Instagram and reached out to my favourite lash brand and I said, "Hey, you know, I'm an Indigenous woman in the middle of Canada and I live in a small reserve in between two lakes and I have this dream of having a company like you."

I knew it was a long shot, but I said that I was looking for advice on how to make my dreams come to come to life. And, maybe three days later, she actually emailed me back and told me to follow my dreams and gave me some contacts.

The first order I ever got came from an Indigenous woman living in California … and I was like, "Oh my gosh, my lashes are going to California."

Then I got an order from Alaska and after that, New Mexico.… And last week, there was this order that at first looked kind of weird, and so I checked it out and realized that it was from someone in Finland!

So I was like, "Oh my God, we're actually going global now."

Normally, with a name like RezGal, you would associate it with Canada and U.S. Indigenous people, but no. I was actually quite proud of myself that my lashes were going all the way to Finland and only in a span of four months since starting my business.

I want young First Nation girls to see themselves as beautiful and empowered. I want them to see that, "Hey, here's Brandi from the reserve and she lives just down the road from us and she has a successful business out of her home — maybe that can be me one day."

I want to empower young girls to never feel ashamed of where they come from.

Eva Wilson-Fontaine: You know, as Indigenous women, we want to be a part of the economy too.

And I remember an elder saying that … Creator gives us these challenges that we might face in life, but it's up to us to find the positive in it and search that out. You can overcome anything when you start thinking in that light.

These pop-up businesses that are happening since COVID-19 hit is really inspiring to see, especially at a time where, you know, we're stuck and isolated. But it's also an opportunity because we are able to really think through our dreams.

Brandi Woodhouse: When I was planning my business I told my husband, "What's the worst-case scenario? I will have to wear all five hundred pairs of these eyelashes that I'm buying for the next five years."

What are some of the obstacles you've faced and how did you overcome them?

Eva Wilson-Fontaine: Having cash flow and savings built up to start a business could be one of the obstacles for some of our Indigenous women. When we started our business, three months of savings was set aside so that if something ever happened where we lost our jobs, we had a cushion before moving through the next door that opened for us.

Brandi Woodhouse: I hit roadblocks myself in the early days and then I tried to get over them — for instance, accounting and bookkeeping skills. I kind of just threw it to the side and then all of a sudden somebody is like, "OK, well, I need to see your bookkeeping." And I thought, "Do I have to do that myself?"

I used Google and YouTube a lot to learn how to keep track of my finances — what's coming in and what's going out.

Looking ahead, what do Indigenous women in Manitoba need to meet their professional goals?

Eva Wilson-Fontaine: I think Indigenous women need to see each other in business roles so that we can share knowledge and support each other.… [We need] more experiences that our women can have and learn … through webinars that let them use technology where they feel safe and in the comfort of their own homes.

Brandi Woodhouse: I think we need to see more Indigenous faces of women in business. I wanted the girls from the reserve and the other communities that know me to see me and to say, "Look at Brandi … she's doing it."

Can you think of an experience that taught you how to get your voice heard?

Brandi Woodhouse: I've always been kind of an outspoken woman since I was a kid. I try to encourage my mom or my sister or my cousins and tell them to talk louder, and I've always watched these empowering women — TED Talks about being included at the table. Even at work, I speak up and say that I want to be in a meeting or I want to have a seat at the table.

I don't ever want to be sat on the sidelines.

Eva Wilson-Fontaine: I was scared to be in front of people, and I'm a very emotional person, so when my passion came through, I wanted to cry and I needed to learn how not to cry.

If you could give one piece of advice to Indigenous women who want to start a business, what would it be?

Brandi Woodhouse: One piece of advice that I would like to give young girls is that you can do it, we can do it, you might be scared of people who laugh at you or criticize you or say, "no, that's not going to work."

But actually, you can do it if you put your heart into it.

Eva Wilson-Fontaine: Don't do things because you're scared to fail. It's like with children — they are our greatest teachers because when they fall down, what do they do? They get back up.

Now our young people are graduating and they're going on to college and universities and getting degrees and starting up businesses and they are not afraid to use their voice to be heard. And that makes me feel good.

I know that we have a promising future for our people and that we're going to be very much a part of the economy.

Eva Wilson-Fontaine is a member of Peguis First Nation and is the co-founder of Amik Inc., Anish Corporation and Cedar Lake Ranch. Eva works with Indigenous communities in areas such as social services, employee retention and cultural awareness sessions, and workshops on the effects and impact of Indian residential schools.

Brandi Woodhouse is Anishiniaabe Ikwe from Pinaymootang First Nation and she is the owner of RezGal Lashes. Brandi gave her company that name because she wants Indigenous women and girls to know that being from the rez is something to be proud of. "No one can ever shame me for where I came from, who I am and where my roots are," she says.