A Manitoba family is warning others after a dog they adopted from an animal rescue group attacked their son within 12 hours of it being in their home and then learned the dog had a history of aggression.

No records provided when dog adopted, no indication of history of anxiety and aggression, Manitoba family says

A Manitoba family is warning others after their son was attacked by a dog they had just adopted from a rescue group — an animal they later learned had a history of aggression.

Paul and Arlene McDonald first saw the dog, Griz, in an online ad from the Homeless and Injured Animal Rescue of Canada, or HIARC, at the beginning of June. A friend showed them the ad because he looked strikingly similar to the dog they already owned.

"He is submissive and very friendly, he is great with kids and dogs, not tested with cats."

The McDonalds contacted the rescue about adopting him. Within days, the family travelled from their home in the southwestern Manitoba town of Carberry to Headingley, just outside Winnipeg, to meet with a volunteer and pick up the dog.

"I thought that she would have the dog, because she was representing the rescue," Arlene said.

The dog, however, was en route from the United States with another volunteer and showed up a short time later, Arlene said.

Griz seemed nervous at first. When they introduced him to their family dog, he went after her briefly. Given Griz had been travelling and was in an unfamiliar situation, though, the family was not deterred.

While Arlene filled out the paperwork, Paul said the volunteer from the U.S. told him the dog had been abused and kept in a kennel for long hours, and was saved from being put down. They also noticed the dog's teeth were damaged, and appeared worn or filed down.

The McDonalds said they were assured he was good with kids and other dogs and they wanted to give the dog a good home. They paid the HIARC volunteer $400 and took Griz back to Carberry without incident.

'Grabbed him by the neck'

The next morning, Arlene had Griz on a leash in the house because she wasn't sure how he would take to the family's cats. As he was leaving for school, her 11-year-old son reached out to pet Griz goodbye.

The dog growled at him, and "before he even had time to retract his hand, Griz lunged forward, grabbed him by the neck, and his lunge forward actually knocked my 11-year-old son down the stairs," Arlene said.

With her son at the bottom of the stairs, Arlene yanked the dog's leash back.

"I'm pulling on the dog, trying to get him out the back door, and he turns and growls at me," she said.

She called Paul, who rushed home from work and took the boy to the hospital. His wounds were mostly superficial scratches, which the family attributes to the condition of the dog's teeth, but doctors inquired about the dog's vaccination history.

Arlene reached out to HIARC and the volunteer who brought the dog from the U.S. She was sent a document from an American veterinary clinic that showed the dog received his rabies shot in 2018, along with other shots in 2017 and 2016.

That's when Arlene began to question why the dog hadn't been seen by a local vet.

The same day of the attack, Paul took Griz to their vet in Carberry to have him fitted with a muzzle.

The vet was alarmed when Griz became aggressive with the staff at the office, Paul said.

At the advice of his vet, Paul agreed the animal should be put down — not only because Griz had attacked his son, but because the vet said the dog was suffering mentally and would be difficult to rehabilitate.

Once the family euthanized the dog, the vet's office in the U.S. agreed to release his medical history to the family, which Arlene said shocked her.

"All throughout his records [were words] like, 'aggressive, aggressive aggressive,'" Arlene said.

She provided CBC with the medical records she was sent.

"Has a lot of anxiety," is noted in the records, along with "at home and around other dogs — severe dog aggression."

The records also show a history of visits to adjust the dog's medication, and an incident where Griz attempted to chew through a metal kennel and "broke a few teeth in the process."

"[Owner] elects to just refill Prozac rather than continue with behavioural training," was also noted.

Arlene began to believe the dog had not been abused as they were led to believe, but rather had extensive behavioural problems.

Based on the records and what she'd be told by the volunteer who delivered Griz, Arlene concluded the former owners "spent a lot of time and they spent a lot of money trying to rehabilitate this dog."

The former owners' eventual decision "to kennel him and muzzle him, and then ultimately euthanize him, was the best thing for the dog," she said.

"It's ultimately what ended up happening anyways."

The rescue acknowledges it never saw the dog, and trusted the word of a volunteer foster placement in the U.S. who had the dog for about a week.

"That's how we assess our dogs — we have our volunteers foster the dog and then they tell us all about it," said Michael Purkhardt, a director with HIARC.

"Griz was living with kids four years old, other dogs, and never, never had aggression issues at all, ever," he said.

He has a different theory about what might have happened.

"My opinion is that their own dog, which does not quite like other dogs that well, got jealous of Griz loving the kid so much, and when the kid hugged their own dog he bit him or something," he said.

"I'm not sure. It's all speculation," said Purkhardt.

A picture sent by the McDonalds shows what "looks like a bite, but at the same time it looks like scratches," he said.

"So we don't know what really happened, because maybe their dog got jealous and bit the kid."

Paul wonders how the family was able to get vet records within a few hours, but those same records were not obtained by the rescue that took possession of the dog.

"This family that gave HIARC this animal from the States spent a lot of money on him. Why didn't [HIARC] ask them for the records?" he said.

Purkhardt said the rescue was given Griz's vaccination record so he could cross the border, but did not look any further into his history.

"He had his vet record to cross the border, so we figured that's all there is to it," he said.

Purkhardt blamed the volunteer for not disclosing the dog's history to the rescue.

"That's why I'm shocked here — somebody along the line has been lying to whoever, then all the lies passed on to us, I suppose. But for the whole week that we had him, he was a great dog."

Purkhardt said the dog came into the American volunteer's care through someone she knew.

"The other owners said they could not care for him anymore, he's too expensive, so they wanted to euthanize him, and then the volunteer said, 'No, we can put him into a rescue,'" Purkhardt said.

"According to all the people that seen him, he's extremely friendly with kids, with people, with dogs, everything — that's why it comes as a shock to me that he did that the very next day," he said.

"If Griz actually did [attack], then something must have triggered him."

'I will not risk it ever again'

Paul and Arlene say they wish they had done more research before choosing HIARC.

"I will not risk it ever again. Had the dog not been on a choke collar and had my son not fallen down the stairs when the dog attacked him, [given] the nature of the bite and the location of the bite, I could have lost my son," Arlene said.

She said she feels misled by the rescue, which she thought had seen the dog and was familiar with him.

"It's the rescue's obligation to make sure that this dog is safe," she said.

Paul said he was shocked to learn there are no regulations around operating a dog rescue.

"It made me mad. Like, I can go out and start a dog rescue right now, and I could be the worst person in the world and just want money," he said.

HIARC offered the family a refund of $350, which Arlene did not expect but accepted, she said.

"When I signed that paper, it was like, this is it, there's no refunds, no anything. So to me, I felt like …agreeing to give us a refund was an admission of guilt on [HIARC's] part."

The rescue said the refund was a gesture of goodwill, since the attack happened the day after the dog was brought home. 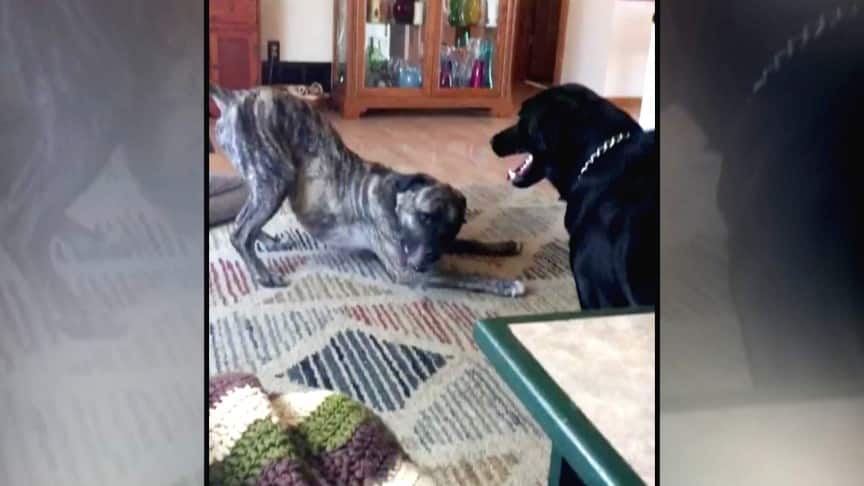 2 years ago
2:50
A Manitoba family is warning others after their son was attacked by a dog they had just adopted from a rescue group — an animal they later learned had a history of aggression. 2:50