Family of 11 refugee children from Somalia arrive in Winnipeg

A family of 11 children — including an 18-month-old baby — arrived in Winnipeg from Saudi Arabia on Thursday.

If it wasn't for their oldest brother, Canada may have never learned of their plight 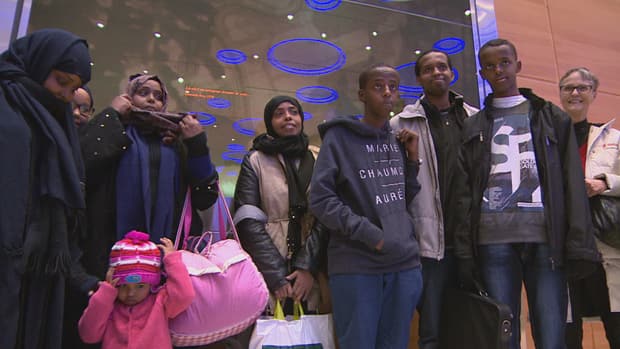 5 years ago
1:33
If it wasn't for their oldest brother, Canada may have never learned of their quandary 1:33

A family of 11 children — including an 18-month-old baby — arrived in Winnipeg from Saudi Arabia on Thursday.

The refugees are originally from Somalia.

Winnipeg's Hospitality House Refugee Ministry and the Anglican Diocese of Rupert's Land sponsored them to escape Saudi Arabia, where they have been hiding for months under the threat of deportation.

Ten of the children are brothers and sisters; the youngest is eight, the eldest 16. The baby is the daughter of the oldest sibling.

Their arrival follows a long story of fear, sadness and ultimately, survival.

The children's father worked at the Somali consulate in Jeddah when they were born in Saudi Arabia, but when he died of natural causes — the same way their mother died — the orphans were stripped of their legal status, making it illegal for them to stay in the country.

At that time, the children's documents were confiscated, too.

Knowing they did not speak the language in Somalia, where there is civil anarchy and their survival was unlikely, the children moved between hiding places in Saudi Arabia before Canada's government processed the private sponsorship.

But if it wasn't for their oldest brother, Canada may have never learned of their plight.

As a 16-year-old, he managed to travel from Saudi Arabia to the Emerson border crossing, walking all the way to Winnipeg, where he made a successful asylum claim.

That was in October 2014 and ever since, his priority has been to get the rest of his family to the country.

While most of his family is expected to arrive in Winnipeg on Thursday, there is one family member, a 16-year-old girl who is a cousin to the children and spent her life with them after her own mother died during childbirth, is not able to travel with the rest of the family.

According to Hospitality House, it's because of documentation reasons that Canadian officials are addressing and expect to resolve.