A Manitoba man who was billed over $6,000 for a one-night hotel stay, with only $200 charged for the room itself, says he'll never use Expedia again. The company now says it will refund his money and provide a $200 voucher.

A Manitoba man says he'll never use Expedia again after the booking company billed him nearly $6,200 for one night at a hotel — with fees and taxes accounting for all but about $200 of the cost.

Justin Smerchanski was travelling on business and logged onto Expedia.ca Monday morning to book a room for the following evening in the town of Willmar, Minn.

In a bit of a rush, he saw Expedia was listing the price for a room at the Holiday Inn Express & Suites for $207.95 Canadian.

"Obviously I thought it was a mistake, and right away I called Expedia," Smerchanski said.

"I ended up talking with them, trying to make my way up to someone who could tell me exactly what was wrong. I was kind of assured right away that this was obviously a mistake and they were going to have it cleared up."

But instead of giving him a refund immediately, Smerchanski says Expedia has given him the runaround for days.

"It just didn't seem like they thought anything was wrong," he said.

Smerchanski said he's spent more than eight hours on the phone with at least half a dozen agents. Each time, he said, he was given a new case number.

"No one can give me a clear answer," he said.

"I basically just kept getting the same runaround, that they weren't able to authorize a credit for that amount. I kept saying, 'Why am I talking to them? Get me up to someone that can.

"I'm starting to get the indication that they aren't going to be clearing it up."

Smerchanski now has his credit card company involved. He said MasterCard has been contacting Expedia on his behalf, trying to get his money back.

"I was told from the credit card company that they've never ever seen anything like this," he said.

CBC News contacted Expedia on Wednesday evening and again on Thursday for an interview, but a company spokesperson did not provide any information about the situation.

After the story was published, Expedia contacted Smerchanski and offered him a refund along with a voucher for $200.

"Our team has reviewed this case, and we have gone ahead and processed a refund for this customer in full. We are very sorry this issue occurred, and deeply regret this experience," spokesperson Mary Zajac wrote in an email to CBC News.

"In this particular instance, we do feel we could have resolved this issue in a quicker manner," she said.

Other customers potentially charged too

Smerchanski said that when he spoke to the staff at the Willmar Holiday Inn, they told him at least two other people were also charged thousands of dollars when they booked through the Expedia website.

On Wednesday afternoon, CBC News attempted to book into the same hotel using Expedia. CBC's bill showed an additional $2,835 "daily property fee." But when CBC News tried to book a room again the next day, the problem appeared to be fixed, with taxes and fees totalling just $22.83.

Holiday Inn says it's not to blame

Holiday Inn said it's not involved in the billing process when customers book through third-party sites like Expedia.

"We encourage guests to book directly through our channels for greater control over their reservations," wrote a spokesperson from InterContinental Hotels Group, which owns the Holiday Inn brand.

Smerchanski said he's a gold member with Expedia and has used the site to book dozens of hotels without issue. He's even used it to book the same Holiday Inn in Willmar.

But Smerchanski said that after the "absolutely terrible" service he has received, he'll never use Expedia again.

"It's just insane. Just to basically be given the runaround multiple times, without knowing for sure the answer, is very frustrating."

"Don't be in a rush and make sure you read all the small print," he said.

Despite being charged, Smerchanski said he didn't end up staying in his $6,180 room, instead opting to stay at the hotel next door. 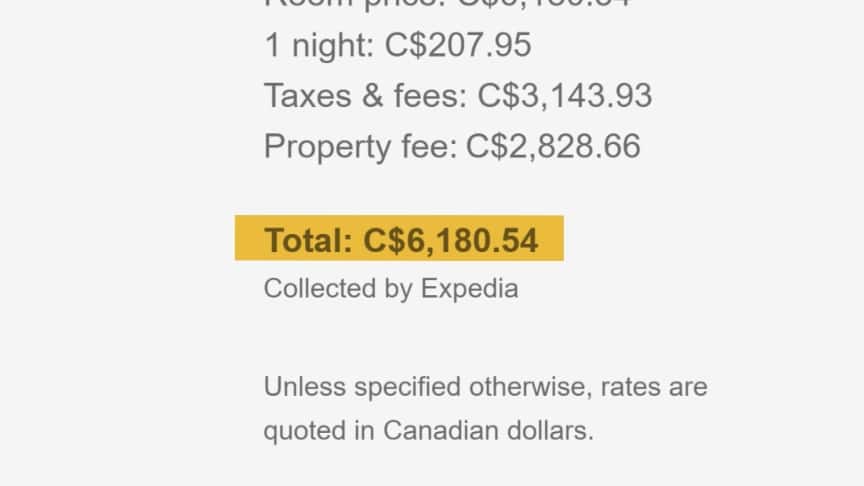 1 year ago
2:34
A Manitoba man says he'll never use Expedia again after the booking company billed him nearly $6,200 for one night at a hotel — with fees and taxes accounting for all but about $200 of the cost. 2:34