A Manitoba judge is calling for a full review of health-care services at the Winnipeg Remand Centre where an inmate died after suffering seizures.

A Manitoba judge is calling for an independent review of health services at the Winnipeg Remand Centre following an inquest into the death of an inmate with epilepsy who had not been given anti-seizure medication.

Provincial court Judge Heather Pullan also wants the province to transfer responsibility for inmate care at all provincial jails from the Justice Department to the Health Department, and to train nurses and guards on how to deal with people with seizures.

Pullan made the recommendations after hearing evidence about the death of Errol Greene.

Greene, 26, had been arrested for breaching a probation order not to drink alcohol. He was brought to the remand centre on April 30, 2016, to await a bail hearing. He notified staff he used valporic acid to control his epilepsy.

It was a Saturday. No doctor was scheduled to visit the centre, which serves as a temporary holding facility for close to 300 inmates, until Monday.

The next day, Greene was on the phone with his partner, Rochelle Pranteau, who told the inquest Greene complained about not being given medication. He started having a seizure during that call and collapsed.

A second seizure followed an hour later. Greene was restrained by staff and became unresponsive. He was taken to hospital and died a few hours later.

"Had Mr. Greene been given valporic acid in the 48 hours prior to his death, he likely would have had a higher blood level than the 6.9-micrograms at autopsy, and be better protected from seizure," Pullan wrote in her report released Tuesday.

A nurse at the centre dealt with Greene shortly after his arrival but was a new employee and did not have access to the prescription drug database that would have confirmed his medication, the inquest report said.

A second nurse who later dealt with Greene did not give him valporic acid, partly because she did not know what else he may have consumed.

Corey Shefman, the lawyer who represents Greene's widow, said he welcomed the report.

"For a person living with epilepsy, having access to their anti-seizure medications is crucial. And so them having not given it to him exposes a number of really serious problems with health services in corrections," Shefman said.

Pullan also said the province should bolster recruitment and retention of nurses to address staff shortages and reduce the number of times nurses work alone.

Justice Minister Cliff Cullen said the government has set up a team of senior officials to review the recommendations, and has already taken steps to improve care at the remand centre.

"These improvements include ensuring that a physician is scheduled to attend the remand centre every day," Cullen said.

"We have also improved record-keeping and file storage at the facility to ensure that health information is meticulously recorded."

Greene was one of five people who died at the remand centre in 2016 — the highest annual number in recent years.

Among the others was Russell Spence, who struggled with guards while being processed. A pathologist attributed the death to cardiac arrhythmia combined with the effects of methamphetamine. 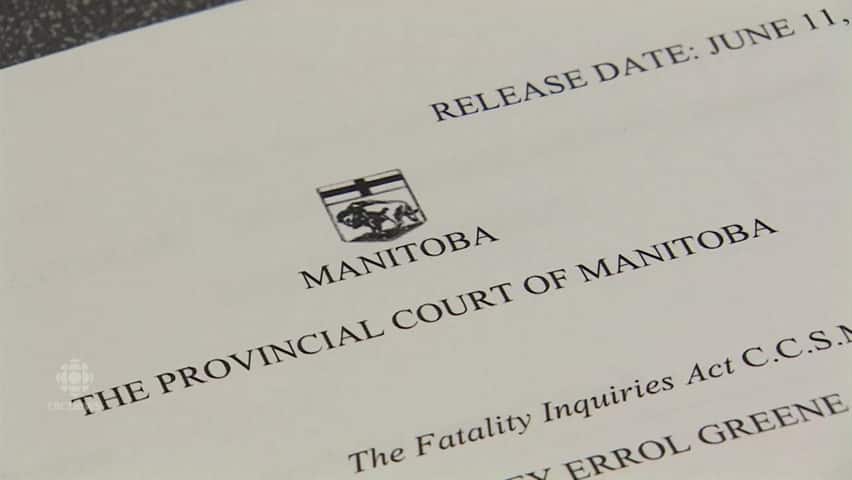 Judge calls for review of health services at Remand Centre

1 year ago
2:04
A Manitoba judge is calling for an independent review of health services at the Winnipeg Remand Centre following an inquest into the death of an inmate with epilepsy who had not been given anti-seizure medication. 2:04