'This is right off the scale': Border town seeks help after spike in refugees

Nearly two dozen refugees who walked across the Canada-U.S. border over the weekend have officials in a Manitoba community worried about whether they can keep up with the trend that only seems to be growing.

Nearly two dozen refugees who walked across the Canada-U.S. border over the weekend have officials in a Manitoba community worried about whether they can keep up with the trend that only seems to be growing.

"This is right off the scale for us," said Doug Johnston, a councillor for the rural municipality of Emerson-Franklin in southern Manitoba.

RCMP confirmed 22 people crossed the border in the Emerson area on the weekend from Noyes, Minn., more than Johnston said he has ever seen in such a short timespan. Last week, another 10 refugee claimant files were opened, said Rita Chahal, executive director of the Manitoba Interfaith Immigration Council.

"What we notice when they are in our office is that they are just extremely grateful and happy they have a chance at a fair hearing," Chahal said. "To us, that's what  is really important; that they are out of harm's way."

Most refugees in recent months have come to Manitoba via Minneapolis, and were originally from places such as Somalia, Ghana and Djibouti, Chahal said. At least four who arrived on the weekend are from Somalia, she added.

Johnston said at this rate he fears someone is going to die in one of the many frigid, snow-covered prairie fields in and around Emerson.

Two Ghanaian refugees had most of their fingers amputated due to frostbite in December after spending hours in the cold while crossing into Manitoba from North Dakota on foot.

"When it warms up, we're concerned that the volume might spike up," Johnston said.

Johnston said he, Emerson-Franklin Reeve Greg Janzen and MLA Cliff Graydon all want to meet with the federal and provincial governments as soon as possible to come up with a plan for how to cope with the influx.

Janzen said his main concerns are safety and security.

"They are coming at all hours of the night, in the dark," he said. "We don't know if they're really bad criminals … if they're into drugs or into crime, and that's a scary thing." 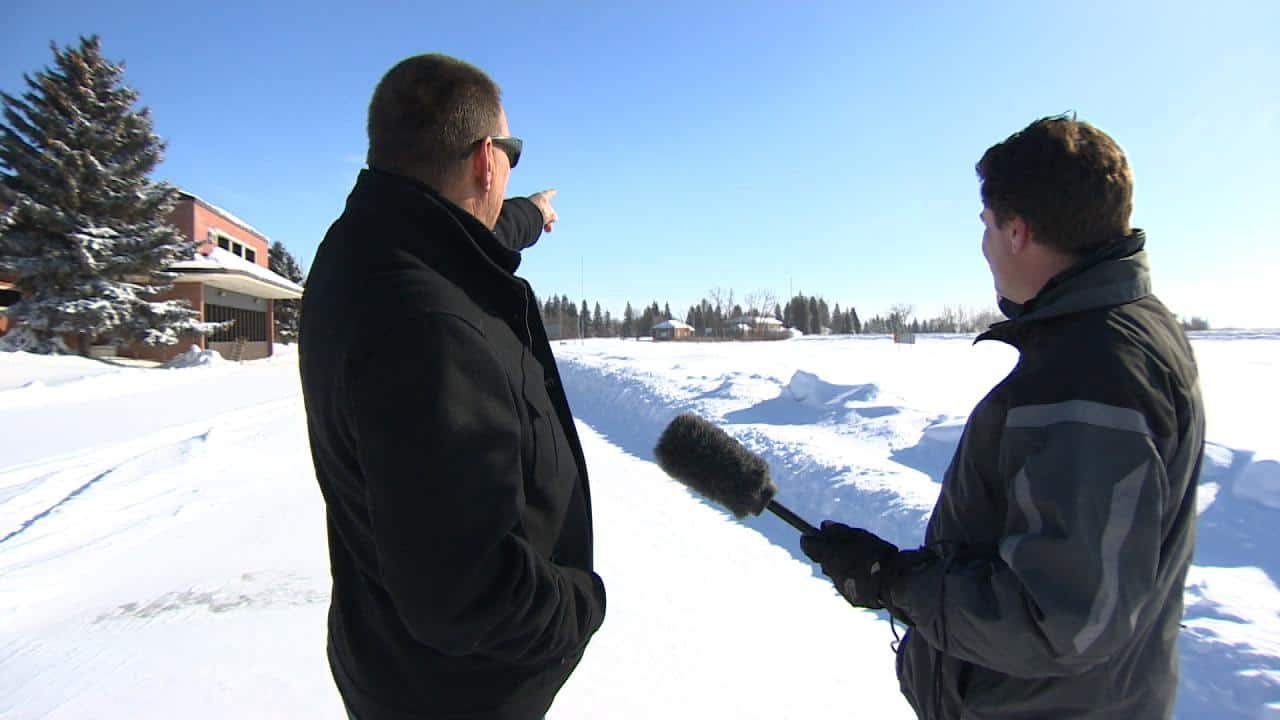 4 years agoVideo
2:13
Nearly two dozen refugees who walked across the Canada-U.S. border over the weekend have officials in a Manitoba community worried about whether they can keep up with the trend that only seems to be growing. 2:13

Emerson resident Greg Baranuik wants the CBSA to beef up security and put more boots on the ground to help monitor the situation.

"I'm not trying to be a cold-hearted human being here. I get it — they're hungry and they must be desperate to take the risks they're taking to come here," he said.

"If they don't want to go through the proper channels and procedures to immigrate here legally, what is it they're hiding? It's a little disconcerting to have these people travelling to and in some cases through our town with no accountability whatsoever. That's not a secure border by any means."

Canadian Public Safety Minister Ralph Goodale said the issue involves a mix of municipal, national and federal law enforcement that is being examined now based on current circumstances.

"The government wants to make sure our borders are strong and secure,' he said. "We want to make sure that everybody crossing the border is treated in the appropriate manner."

Farhan Ahmed, originally from Somalia, and 18 other refugees walked into Manitoba on Saturday, with another three coming in Sunday, RCMP said.

The wave over the weekend put pressure on border staff, who reached out to emergency officials in Emerson to help temporarily house the refugees at a local community complex.

The hall is occasionally opened in the event of bad snowstorms for drivers who get stranded, but the scene over the weekend was unlike anything volunteers have had to deal with before.

Typically when refugees cross near Emerson, about 100 kilometres south of Winnipeg, local fire crews or RCMP pick them up and take them to the CBSA for processing.

On the weekend, RCMP helped shuttle refugees to the community hall at 8:30 a.m., where they stayed for about 12 hours while volunteers provided them blankets and warm clothes.

Johnston said Brenda Piett, an emergency co-ordinator with the Rural Municipality of Emerson, described the group as "awfully hungry." They were given bread and Nutella when they arrived, Johnston said.

"Generally we don't supply food for the people that come into town because we're not supposed to … but this is a different case," Johnston said.

Johnston said people in Emerson don't really know what the legal limits are on how much they are allowed to help.

This has been our busiest year for refugee claimants, definitely.- Rita   Chahal , Manitoba Interfaith Immigration Council

"That human empathy on the part of Canadians in wanting to receive and protect appropriate people in a generous way is a human instinct that needs to be applauded," Goodale said.

Under the Safe Third Country Agreement with the U.S., asylum seekers are required to claim refugee status in the "first safe country they arrive in." CBSA officials must turn away any such claimants trying to enter Canada via customs at U.S. land borders.

But because of a loophole in the deal, signed in 2004, individuals who cross the border on foot outside of official crossing points are able to claim refugee status in Canada.

"I personally don't think they should be considered refugees," Janzen said. "The United States is a safe country, and yet we're giving them refugee status."

A growing chorus of voices, including Amnesty International, have called for the deal to be tossed or revised, in part, because of a view that it encourages asylum seekers in the U.S. to endanger their lives crossing into Canada.

"It's supported by the United Nations High Commission for Refugees to prevent asylum shopping," Hussen said, adding the deal remains in tact and hasn't been impacted in any way by Trump's executive order.

Rita Chahal said she appreciates the concerns of Johnston and others in Emerson, but the increase isn't only adding pressure to border communities.

"This has been our busiest year for refugee claimants, definitely," said Chahal.

The council facilitates refugee settlement services through Welcome House. The Manitoba government has arranged for three housing units for newcomers in Winnipeg, all of which Chahal said are at capacity.

In some recent cases they've had to put up refugees in hotels, and staff have even resorted to letting some refugees stay with them in their homes.

The council usually receives enough funding to handle between 50 and 60 newcomers a year, but the need is growing.

"We have to look for additional resources to physically manage that influx," Chahal said, adding the current funding agreement between the Manitoba Interfaith Immigration Council and the province expires at the end of March. Private donations are also running low, she said.

Council staff plan to meet with politicians and volunteers in Emerson to talk next steps. They hope the conversation soon includes federal and provincial officials, Chahal added.

Janzen has called a meeting that will take place Thursday for local emergency officials, firefighters and councillors.

With files from Marcy Markusa, Nelly Gonzalez and Erin Brohman