All 46 people who went to hospital after a carbon monoxide leak at a Winnipeg motel on Tuesday have survived and most have been released, according to a city health official.

Most released from hospital, no one required intensive care, health official says

All 46 people who went to hospital after a carbon monoxide leak at a Winnipeg motel on Tuesday have survived and most have been released, according to a city health official.

"We can confirm there have been no fatalities, nor any patients requiring intensive care services," Paul Turenne, a spokesperson for the Winnipeg Regional Health Authority.

"The vast majority of the patients have already been discharged. The remaining patients are being treated and monitored. No patients have been admitted to hospital at this time," he said in a statement Tuesday evening.

People were taken, or took themselves, to four area hospitals — St. Boniface, Seven Oaks General, Grace Hospital and the emergency departments at Health Sciences Centre — after a carbon monoxide leak this morning at the Super 8 Motel West near the city's western edge.

Fifteen of them were, at one point, in critical condition and five were unstable, according to a city official.

Turenne added he does not expect to provide any further updates.

A carbon monoxide alarm went off at the motel — on Portage Avenue, near the Perimeter Highway — just after 10 a.m. CT Tuesday.

Eight fire trucks, along with ambulances and a major incident response vehicle [MIRV] responded to the alarm, which was in the motel's boiler room, said Winnipeg Fire Paramedics Services chief John Lane.

Fifty-two people and a dog were forced from the motel, according to the city. Winnipeg Animal Services helped the dog.

"It became immediately apparent that there was carbon monoxide present in the location," Lane told reporters.

"I'm happy to say none of the patients were requiring resuscitation, none of them were intubated or anything," he said. 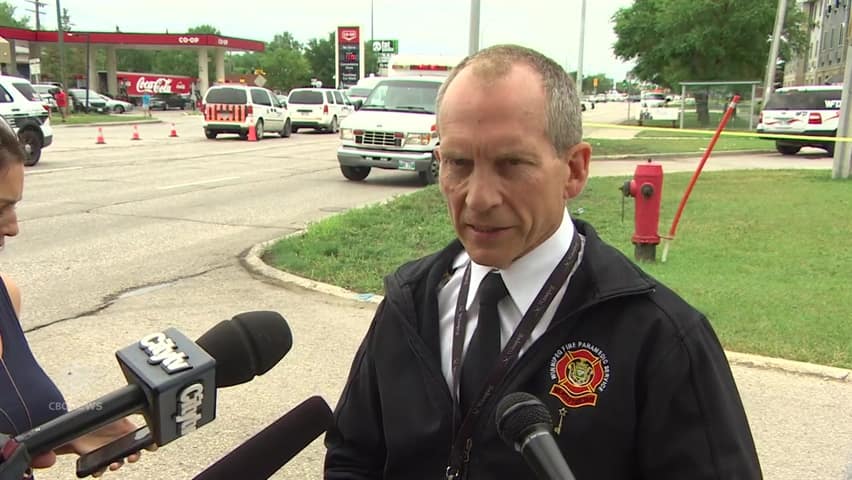 Motel guest Leo Flett was sleeping when ambulances arrived. He said he fled his room after getting a phone call notifying him of the emergency.

"I was kind of spooked," he told CBC News.

Flett told emergency services he was okay and didn't go to hospital.

The motel's owner, Justin Schinkel, told reporters at the scene that at least one of his staff needed oxygen after the building was evacuated.

"It's a huge misfortune that this happened," said Schinkel, who wasn't at the motel when the alarm sounded, but said he went there after getting a call from his general manager around 10:30 a.m.

"I'm super happy that the first responders got here as quickly as they did."

The leak "basically drained" the fire stations of the city's West End neighbourhood according to firefighters union president, Alex Forrest.

"This was a major, serious incident," Forrest told CBC News. 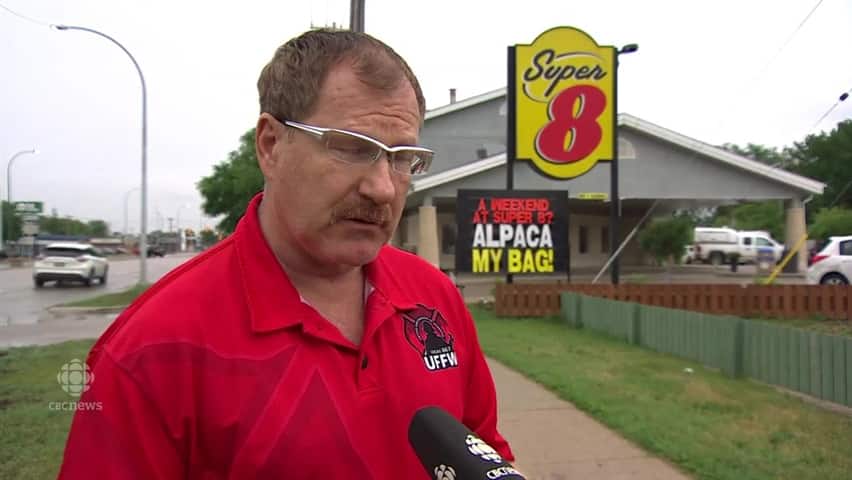 The source of the leak is under investigation. Manitoba Hydro crews shut off the gas lines and started ventilating the building.

Schinkel said the motel recently had a fire inspection and has never had a gas leak. He also said the motel wasn't undergoing any upgrades at the time.