A shooting in Winnipeg's West End has left a man dead.

3rd homicide in 10 days; police say shooting near Ellice and Empress was not random

A shooting in Winnipeg's West End has left a man dead.

Emergency crews were called around 1:15 a.m. Tuesday to Ellice Avenue near Empress Street, where they found the man with serious injuries.

He was rushed to hospital in critical condition but pronounced dead soon afterward.

The investigation covers a large area, with Ellice blocked between Empress and Strathcona streets, and it will remain that way "for the foreseeable future," police spokesman Const. Jay Murray said.

He said 11 police units, including two canine units, were part of the first response team to the area. A forensic identification unit is now at the scene as well, and bullet casings can be seen on the ground.

Winnipeg police say preliminary investigation has revealed the shooting was not random in nature.

No one is in custody and Murray couldn't comment on if there are any suspects.

The homicide is the eighth of the year, which puts the city on pace for 42, Murray said.

"You obviously hope there will be a lull; you never want to see homicides in your city," Murray said.

"But we're not off to a great start."

Murray said police are also seeing a shocking increase in gun violence in the city.

Three of Winnipeg's 22 homicides last year involved firearms. This year, it's already five out of eight, he said.

"That's an alarming stat to me," he said. "We've seen a significant increase in firearms that have been seized year to year."

Of those, 760 were classified as "crime guns" — those used in a crime, found on the street or connected to someone charged with unauthorized possession, Murray said.

"There's not a day that goes by that I don't review the last 24 hours and see that officers are taking firearms off the street," Murray said.

"I don't know what the answer is but we'll keep working."

Typically, where there is an increase in the drug trade, there is a corresponding surge in gun violence, Murray said. Right now, Winnipeg is in the midst of a methamphetamine crisis.

Police announced last week the creation of a guns and gangs unit that will launch in spring.

There have been three homicides in 10 days in the city.

Jaime (Jimboy) Adao, 17, died on March 3 when he was attacked during a home invasion at his family's house on McGee Street in the West End.

The man accused of the attack, Ronald Chubb, 29, was shot at the scene by police and has been in hospital with critical injuries ever since.

Investigators intend to charge him with murder once they are able to speak to him, police have said.

On March 8, Warren Stewart Nabess, 52, died after being assaulted at a home on Selkirk Avenue in the city's North End, around 4:45 a.m.

Robert Terry Williams-Stove, 19, and Eric Justin Sinclair, 38, have been charged with second-degree murder in that killing, while a 15-year-old is charged with accessory after the fact to murder.

The homicide Tuesday comes just five days after police hosted a safety forum in the West End to talk about ways to address the problems afflicting the neighbourhood — crime, addictions and gang issues they believe are being fuelled by methamphetamine.

This investigation into Tuesday's shooting is continuing by members of the police service's Homicide Unit. 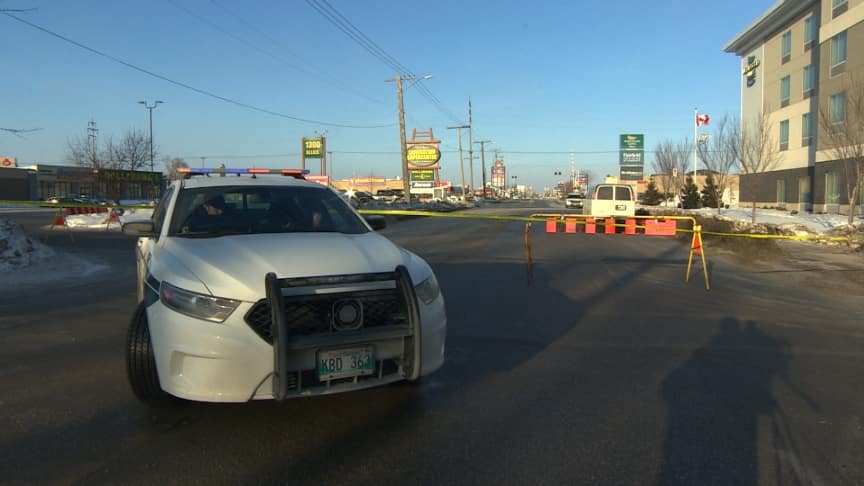 2 years agoVideo
1:26
Winnipeg Police are investigating an overnight homicide in a parking lot near Polo Park 1:26