It was a sunny July day on the Prairies when Laura Reeves witnessed the slow death of a secretive amphibian in southeastern Manitoba that isn't found anywhere else in Canada.

It was a sunny summer day on the Prairies when Laura Reeves witnessed the slow death of a secretive amphibian in southeastern Manitoba that isn't found anywhere else in Canada.

It was an eastern tiger salamander, a relatively difficult to spot amphibian, and it met its end in the mouth of a garter snake.

"Weird thing to watch," said Reeves, a botanist who lives with her fiancé in the border-town of Gardenton, Man. "I've seen snakes eating frogs before but not something this big."

Reeves's fiancé Tony Klassen was taking advantage of the nice weather on July 2 to mow their lawn when he pushed past a grass-covered divot and noticed something wriggling beneath the cover.

"He saw this snake and thought, 'What the heck is going on here?"" Reeves said.

A large plains garter snake had the torso of an eastern tiger salamander clenched between its rows of tiny Velcro-like teeth. The snake wrestled the salamander into position, unhinged its jaw and swallowed the slippery thing tail first over the course of the next hour. 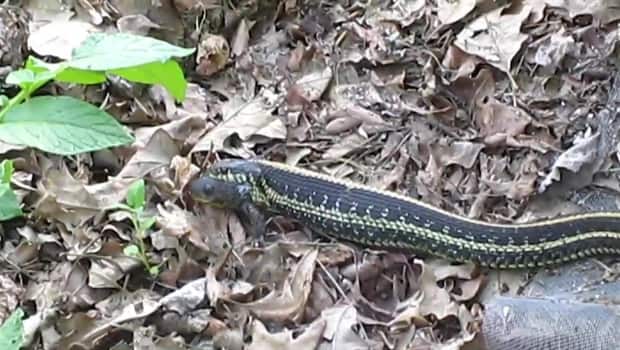 4 years agoVideo
0:19
Laura Reeves and her fiancé caught a rare sight earlier in July when they recorded a big plains garter snake swallowing an eastern tiger salamander in Gardenton, Manitoba. Biologists are actively studying the species' range and abundance, and there's currently a recommendation into the federal government to list it as endangered, biologist Colin Murray said. 0:19

Reeves's fiancé continued mowing the lawn all the while, checking in periodically to watch the show that ended with an amorphous bulge in the snake's belly.

"The salamander put up a pretty good fight," Reeves said. "I don't think I would want to go that way. It's weird, who do you root for, the snake or the salamander?"

Reeves said she commonly sees the salamanders lurking beneath boards and in ditches near their property, but retired reptile and amphibian biologist Doug Collicutt says the couple saw something unfold in the wild even he has never seen.

"Down there there's lots of garter snakes and I'm sure the interaction occurs pretty regularly, but actually witnessing it is pretty astounding," said Collicutt, director of the Manitoba Herps Atlas, a citizen science-driven project to catalogue amphibian and reptile sightings across Manitoba.

"It's not like in all the nature shows on TV where they have waited days and days to capture all the predator-prey relationships. In the wild it is really rare to encounter these things."

Carla Church, a biologist with Manitoba Sustainable Development, said very little is known about the species' population and range in the southeast, but a couple things are for certain.

"Salamanders help keep insect and small rodent populations in check … they are also a source of food for birds — and apparently snakes," said Church, adding the province has been actively monitoring the species since 2014.

The Committee on the Status of Endangered Wildlife in Canada has recommended eastern tiger salamanders be listed as federally endangered.

Despite the species already being listed as threatened or endangered in much of its U.S. range, Church says there aren't any provincial protections in place, as Manitoba's Endangered Species and Ecosystems Advisory Committee hasn't yet assessed eastern tiger salamanders as provincially at risk.

"As global populations of many amphibian species are crashing, any knowledge gathered on these species will help us preserve and manage salamander populations in Manitoba," Church said.

Have you seen this salamander?

One reason behind that lack of protections again comes down to the paucity of information about the species in Manitoba.

"I believe the last time it was [attempted] to be listed in Manitoba, it was called data-deficient — there wasn't enough observations to say, one way or another, whether it should be," said biologist Colin Murray.

Murray and Collicutt are heading up the Salamander Co-operative initiative in conjunction with the province to try to fill the knowledge gap and answer the question: Is this species at-risk after all?

Murray and others seldom see the creatures out on surveys.

"They're rather a secretive animal," he said.

"The funny thing also is that local landowners that I call to survey their land, they say they see them all the time," Murray said. "You stop in a gas station and talk to some of the local people and they say, 'Oh yeah, I've seen one.'"

'Only a handful of records'

In the past both were treated as subspecies, but the consensus among scientists now is the two are genetically different enough to be considered separate species, Murray said.

There have been a few unexpected cases of what looks to be hybridization between the two where territories overlap.

"That was startling to us," Murray said. Genetic analysis by University of Guelph researcher Jim Bogart shows preliminary evidence of inter-mixing. "Kind of put our salamander paradigm on its head. That's the fascinating part of this, there are still things to be discovered."

They're 'for sure' rare

Murray said scientists have only been able to confirm eastern tiger salamander habitat locations at five sites — usually in cattle dugouts and gravel pits in the Vita and Tolstoi, Man., areas.

"I would call them rare, for sure," he said. "We don't really know where they are. We assume that there's more of them out there, especially talking to locals."

Thus far, researchers have gone salamander hunting in Stuartburn, Sandilands Provincial Forest and up to Hadashville, north of the Trans-Canada not far from the Manitoba-Ontario border, among other areas in the southeast.

Whatever comes of the monitoring project, Collicutt says, the snake-versus-salamander event is a colourful illustration of the broader evolutionary struggle for dominance between amphibians and reptiles.

"It's a constant battle with the snakes and amphibians with this biological arms race of being able to try and get more poisonous or noxious," Collicutt said.

"The snakes adapt to be able to eat [the salamander,] so the other critter has to get more toxic, and back and forth until you get to some of these ridiculous levels of toxicity that are out there."

Murray encourages landowners in southeastern Manitoba who come across eastern tiger salamanders to take photos and call or email the Salamander Cooperative.

Changes to habitat severely inhibit a salamander's ability to survive and reproduce.