'We don't want to see any more drowning deaths': fundraiser will pay for newcomers' swimming lessons

A Winnipeg school is raising money to help newcomers who can't afford to take swimming lessons, something many of these kids may take for granted. 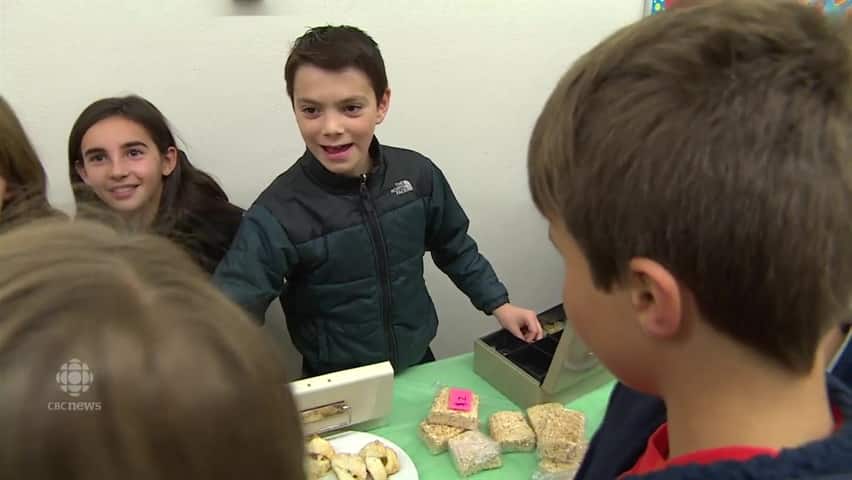 A Winnipeg school is raising money to help newcomers who can't afford to take swimming lessons.

It comes after the drowning deaths of two children whose families had immigrated to Canada from the Philippines.

"We don't want them to drown in our lakes and stuff, so we just think we should help give them swimming lessons," said Grade 6 student Alex Sandre.

He was among dozens of Grade 4 to 6 students at Grosvenor School who held a bake sale on Thursday.

Money raised from the bake sale will go to N.E.E.D.S, Newcomer Employment Education Development Services, a resource centre for immigrants and refugees. The money will then go to a larger fundraiser called the "Burkini Pool Party" which will be held later this month.

"I heard lots of them don't have very much money and they can't afford a lot of things, so we were challenged to raise $100," said Sandre who added he learned to swim at a young age.

"I think I was five years old," he said.

Winnipeg schools were asked to come up with ideas during the month of October to enable young newcomers to take swimming lessons and learn about water safety.

The goal is to raise $10,000 and send 100 kids to a swimming program in Winnipeg. The funds will also help cover the cost of bathing suits and transportation to the classes.

Grade 4 student Myka Humble said it makes her sad to think about the hardships many refugees face when they come to a new country.

"They don't know how to swim and in some countries they're not allowed to wear their bathing suit choice, and we're trying to let them wear whatever they want," Humble said.

Grade 5 student Mateo Cardona said it feels good to be able to help.

"We've raised our goal and we're going to go above and beyond," said Cardona.

"We're very happy with the response from schools and really celebrating their involvement," said Sara Warkentin, a youth worker and educator with N.E.E.D.S. Inc.

'Families have a ton on their plates'

Warkentin said the idea to help newcomers learn how to swim came up after the drowning deaths of two children last summer.

"This August alone we saw four drowning deaths in Manitoba, three of them were actually newcomers," said Warkentin.

"Two were children and one was a youth, a young man that was 22 years old and to my knowledge he was connected to the centre, he was not a client but he had connections to staff members and other youth that attend here as clients," she said.

"We don't want to see any more drowning deaths."

Warkentin said many families from different countries don't have a lot of experience around water safety and it's not something they think about when they arrive in Canada.

"These families have a ton on their plates when they get here," she said.

"So it might not be a top priority to get your child to water safety lessons when you're dealing with other issues like finding housing, and learning English and finding employment," Warkentin said.

Warkentin said she's not certain how many schools are participating in the school challenge because not all of them have officially signed up.

She said members of the public and local businesses can also help by donating to the N.E.E.D.S. organization online.

Grosvenor School had raised more than $500 by the end of Thursday.

Warkentin said the total proceeds raised will be announced at the Burkini Pool Party fundraiser at Seven Oaks Pool on October 29.