A teen is straddling a bike without a seat behind a Tim Hortons dumpster, a balaclava covering his face, flexing his hands through neon pink ski gloves. "Hey partner, how you doing today? Do you want a blanket?" Sean Sousa asks. He's piloting the West End 24 Hour Safe Space for Youth outreach van, now out seven days a week.

The teen is straddling a bike without a seat behind a Tim Hortons dumpster, a balaclava covering his face, flexing his hands through neon pink ski gloves.

The West End 24 Hour Safe Space for Youth outreach van pulls up beside him. It's –18 C, but with the wind, feels more like –30.

"Hey partner, how you doing today? Do you want a blanket?" Sean Sousa says, sounding like he's greeting an old friend.

"Sandwich?" offers his partner, Kristen Wiltshire, from the passenger seat.

The teen, looking cold, eagerly accepts, stuffing everything into a black backpack.

"We're from the West End 24 Safe Space. We have a youth safe space on Langside over there," says Sousa, gesturing toward Portage Avenue.

"Warm as they're going to get, really," he replies, before accepting a pair of mitts.

It's the first week the overnight drop-in centre, run out of the Magnus Eliason Recreation Centre by the Spence Neighbourhood Association, is open seven nights a week, thanks to new grant money.

The outreach van, which patrols the streets at night for kids in need, will now operate just as often. The safe space and van used to just run two to three nights a week, but after the death of Windy Sinclair, a young mother of four who froze to death in the West Broadway area earlier this winter, they've amped up the efforts to protect young people from the cold.

"Never been there, but I might take a look," he replies, then rides off.

The van is packed full of neck-warmers, tuques, blankets, gloves, and baggies stocked with sandwiches and snacks. The pair begin their drive at 9:30 p.m. and will cruise the West and North end streets of Winnipeg until about 2 a.m.

It's a task that's personal for Sousa. He's been in these kids' shoes, nursing cups of coffee in 24-hour fast food restaurants just to stay warm.

That's where they head next — many youth go back and forth all night between the Tim Hortons and McDonald's between Maryland and Sherbrook, he said.

"Moving from place to place, hitting homeless, not really having a secure bed, or a secure roof. It's difficult. Sometimes all you need is just a little bit of stability but when you don't have it, it's the most impossible thing to get."

His mission is to spread the word about West End 24, and to let youth know they have other options.

"I think it's a tragedy. Especially because there's a facility down the street for them to use," he said.

But the word is already getting out about WE 24's extended hours. On Tuesday, 15 young people came to the centre, and eight stayed overnight to sleep. They all had a hot meal, warm drinks and a ride to wherever they needed to be in the morning.

Now that outreach and drop-in services are offered week-long until the end of March, they can connect with more young people, said Sousa, instead of focusing all efforts on the ones who come all the time.

"I think it means so much. It's so important for there to be some consistency with youth knowing where they can go," said Wiltshire.

"There's not enough spaces in this city  for people to go when it's –40 outside and so us being open is just another place where people can get out of the cold and be in a safe, caring environment."

Since the centre opened in August of 2016, at least 300 people registered their name as having used the services. The building, which offers daytime programming to vulnerable children and youth as well, is always buzzing.

"You never know who's going to show up, it could be a brand new person, it could be someone who's been coming since we opened our doors," said Sousa.

Of all the things the youth are struggling with, the biggest issue, said Wiltshire, is homelessness.

Many of them have aged out of the Child and Family Services system, she said, and don't have a stable adult presence in their lives.

"A lot of the stuff that we're seeing in the overnight hours are those crisis needs. Our staff work really hard to meet that need in the moment but then also continue that care throughout the week." 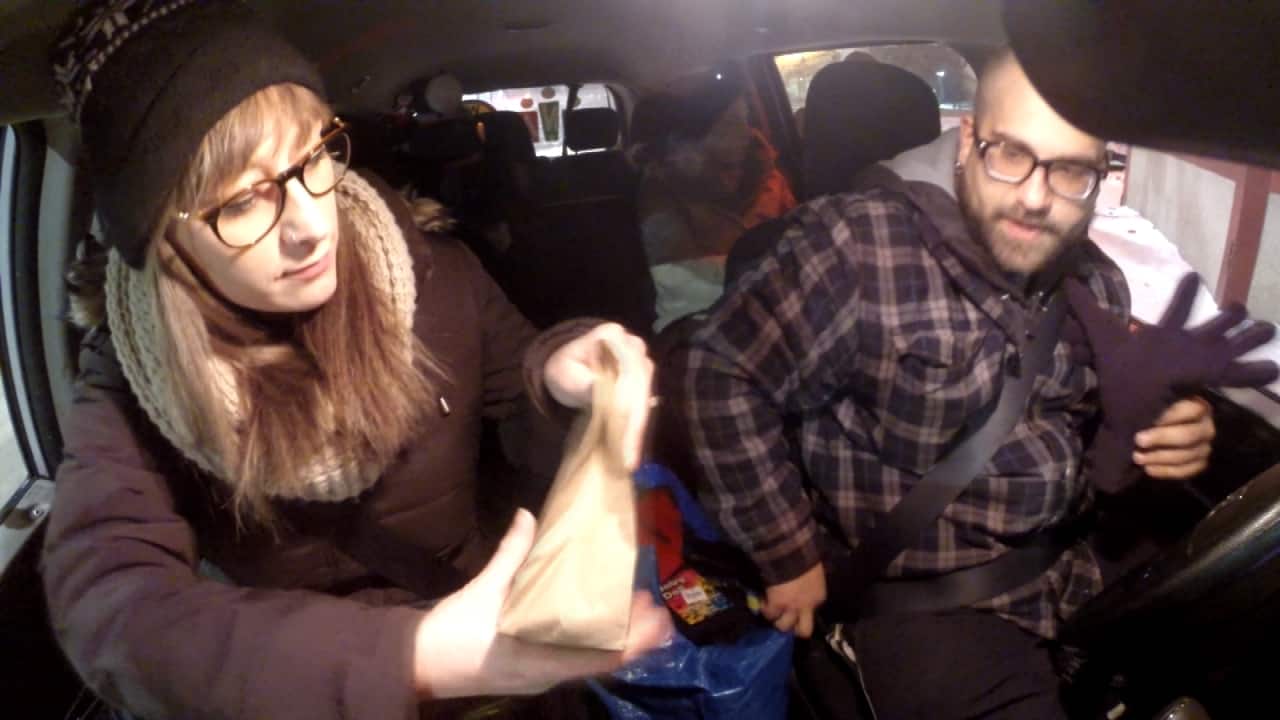 3 years ago
2:30
An outreach van offering food and warmth will now cruise the West End and North End streets until about 2 a.m. The mission is to protect young people from the cold and spread the word about the West End 24 Safe Space overnight drop-in centre for youth. 2:30

That means connecting the young people with mental health services, medical appointments, and working with their partners to try to keep things consistent: Rossbrook House, a day and night drop in centre for youth, and the Ndinawe Safe Home and Resource Centre.

WE 24 can always use more donations of food and warm clothing, as there's a "never-ending need," said Sousa. But what most youth come to the centre in search of is friendship.

Sousa stops at the corner of Ellice and Hargrave, where a young man in an oversized hoodie is sitting alone on the ground against a building, head down. His left hand his bandaged.

Sousa asks him if he wants gloves; he looks up slowly and says yes.

"Here bud," says Sousa, handing him the mitts and a sandwich, then lets him know about the overnight drop-in.

He gets back in the van and heads towards Main Street. Teens in the WE 24 network begin to call, asking for rides.

"It's touching for me to work with people that are struggling but are still being resilient and trying to move forward with them, with their lives, and trying to, like, survive," he said.

"And being able to sort of be a beacon for some of them and support them further and get them to move into different stages of thinking."

Sousa says he finds it 'moving' to be the trusted adult for any kid who didn't have one.

"Just being able to let them know that it's going to be OK; we're here for you, we'll always be here for you."