Some Manitobans are applauding the Supreme Court of Canada's ruling regarding doctor-assisted suicide, including the daughter of Susan Griffiths, who travelled to Switzerland in 2013 to take advantage of that country's assisted-suicide laws. 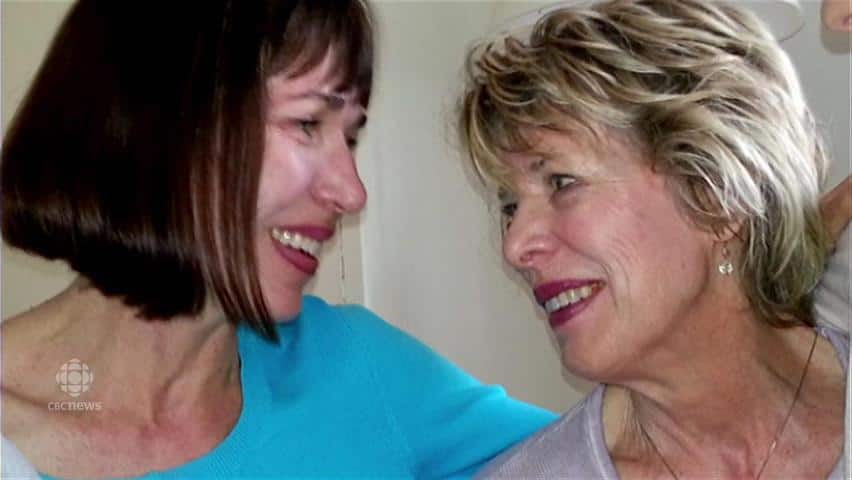 6 years ago
2:26
Manitobans are reacting to a Supreme Court of Canada ruling regarding doctor-assisted suicide, including the daughter of Susan Griffiths, who travelled to Switzerland in 2013 to take advantage of that country's assisted-suicide laws. 2:26

Some Manitobans are applauding the Supreme Court of Canada's ruling regarding doctor-assisted suicide, including family members of Susan Griffiths, who travelled to Switzerland in 2013 to take advantage of that country's assisted-suicide laws.

The country's top court ruled unanimously on Friday that competent adults with grievous and irremediable medical conditions have the right to ask a doctor to help them die.

"It means that Canadians have a choice. It means that, you know, should they end up in a situation at the end of life that is unbearable to them, they do have an option which we've never had before."

Susan Griffiths, 72, had multiple system atrophy, a rare disease that was robbing her of the ability to perform the most basic bodily functions. There is no cure or even hope for remission.

Determined to die on her own terms, she flew to Zurich in April 2013 and checked into Dignitas, a facility that offers a doctor-assisted suicide service.

​She was surrounded by her children and grandchildren when she died.

Griffiths had urged the federal government to reopen the debate on doctor-assisted suicide. Her family members and friends continued to lobby on her behalf after she died.

"I'm proud that, you know, she was a part of this in order to make this change," Natasha Griffiths said.

"I'm also proud of the country, that we have a country where this kind of decision can come down."

​He has already introduced a private member's bill — which was also introduced in the Senate before Christmas — to make physician-assisted death legal under Canadian laws.

"This ruling will, I believe, reduce suffering," he told reporters after the ruling was issued in Ottawa early Friday.

"It will allow people to actually live longer because they will have the peace of mind that they are not going to have a horrible death."

Fletcher became a quadriplegic after hitting a moose with his car in 1996.

Manitoba Justice Minister James Allum issued the following statement: "The Supreme Court today released an important and historic judgment on physician-assisted death. We expect the federal government to take the lead in responding to this judgment. This decision offers an opportunity for an informed dialogue about this important matter for all Canadians."

But the Manitoba League of Persons with Disabilities says it's disappointed with the Supreme Court decision and worried that people may now see assisted suicide as a way out.

"Some people with disabilities already feel like a burden to their family," co-chair Allen Mankewich told CBC News.

"Given that this is now an option on the table we feel that, you know, some people might … feel compelled to take that as an option if they feel like they're a burden."

Mankewich said he hopes the federal government will put restrictions in new legislation to protect people with disabilities.

"We would prefer a focus on things like, you know, increased palliative care, increased supports to people with disabilities, so people aren't put in the position, you know, where they have to think … 'Is being dead better than being alive?'" he said.

Fletcher said having doctor-assisted suicide as a choice will bring comfort to Canadians who may have considered it in the past. He added that it's just one part of providing care to dying patients.

"We do need better palliative care, home care, hospice care, yes. But we also have to be merciful, compassionate, empathetic, understanding, and respect people to make the best decisions for themselves," he said.

Fletcher said his bill could be used as "a foundation for parliamentarians going forward," and a Criminal Code provision would need to be included to prevent abuse.

Arthur Schafer, a philosophy professor and ethicist at the University of Manitoba, warns that the Supreme Court ruling likely won't end the ongoing legal battle over the issue.

"If the government is overly restrictive, then there'll be another constitutional challenge," he said.

"If some people think that the government's legislation is too permissive, that could be challenged."

Natasha Griffiths said the greater injustice is what her mother initially faced: not having any choice when it came to her own future.

"I think she probably was robbed of a little bit of time," she said. "She might have had more time or been willing to take more time if she hadn't had to worry about the trip she had to make."

With files from the CBC's Laura Payton