Animal experts are trying to figure out what may have killed dozens of black birds that fell from the sky in Winnipeg's North End on Wednesday. 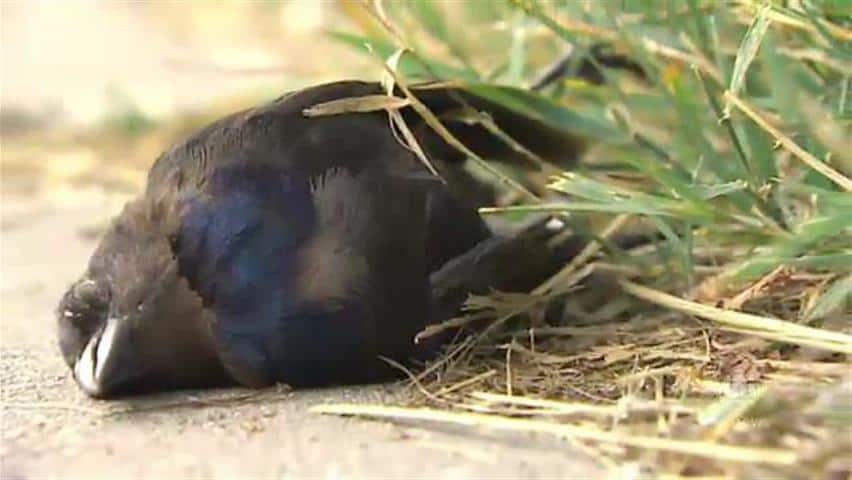 8 years ago
2:00
Animal experts are trying to figure out what may have killed dozens of black birds that fell from the sky in Winnipeg's North End. 2:00

Animal experts are trying to figure out what may have killed dozens of black birds that fell from the sky in Winnipeg's North End on Wednesday.

Conservation officers have picked up more than 50 dead birds near the intersection of King Street and Dufferin Avenue, while the Winnipeg Humane Society took in 11 birds that were still alive.

Erika Anseeuw, the humane society's director of animal health, said all the living birds were reasonably bright and active, although they cannot stand or fly.

The birds will be euthanized and sent to a pathology lab for autopsies.

Anseeuw would not speculate on what exactly may have killed the birds, but she suspects they may have accidentally gotten into something.

"My suspicion is this is what it's going to be rather than any kind of apocalyptic foretelling of birds falling from the sky," she said in an interview with CBC Radio's Up to Speed program.

Possible factors may include exposure to disease or toxins, Anseeuw said.

'Falling out of the trees'

People in the area told CBC News hundreds of black birds — possibly grackles — began flocking in a "bizarre manner" atop vehicles, in the trees and near businesses starting at around 7:30 or 8 a.m.

"There was probably, I would say … almost up to the thousand birds in the trees, and then I was looking up and then one fell right in front of me," said Tanya Lee Viner.

Susan Tiganagis, who works at a Main Street chip shop, said she saw a "blanket of black" in the lane behind the store.

"My husband said, like, 'This is a Hitchcock movie.' It's crazy!" Tiganagis said.

"They were just dizzy. They didn't know where they were going. I've never seen them act like that," she added.

Later that morning, dozens of birds started dropping from the sky. The streets near the intersection of King and Dufferin became littered with bird carcasses.

"They were literally falling out of the trees and they were still dying," Tiganagis said.

"You couldn't step anywhere without stepping on a bird."

Workers at a nearby community services agency said they saw dozens of birds falling from the sky at around 10:30 a.m.

The workers said they called the City of Winnipeg, Manitoba Conservation and Environment Canada to see if anyone would investigate what happened.

Finally, a passing police officer called conservation officers and authorities arrived on Wednesday afternoon to pick up the deceased birds.

With files from the CBC's Sean Kavanagh