David Hanuschuk, who has dwarfism, says he's been bullied since Kindergarten

The mother of a Winnipeg boy who says he's constantly bullied at school is overwhelmed by the support they are getting since going public with their story. 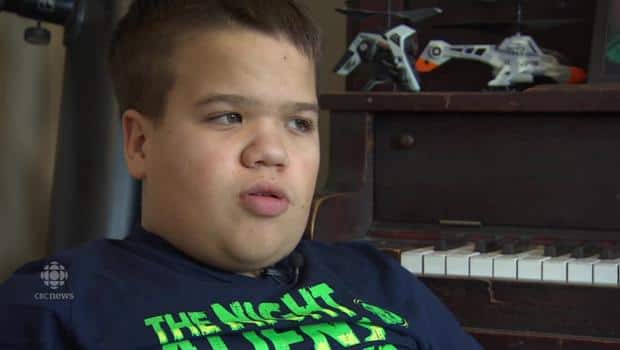 Winnipeg boy with dwarfism talks about bullying at school

6 years agoVideo
1:57
Teen David Hanuschuk, who was born with dwarfism, a genetic condition that limits his growth, has constantly been bullied at school since Kindergarten. 1:57

The mother of a Winnipeg teen who says he's constantly bullied at school is overwhelmed by the support she and her son have received since going public with their story.

Her 15-year-old son, David Hanuschuk, has dwarfism — a genetic condition that limits his growth — and says he has been tormented by fellow students since Kindergarten.

Lisa Funk said it was difficult to come forward, but the positive reaction has been helpful.

"It definitely boosts my courage, because I was so on the fence about doing this, just because we are so private," she said. "Having so much support has given us a boost to keep going, and one of my friends did say, 'you've gone this far, keep going.'"

But the reaction at her son's school hasn't been positive. Funk said she pulled him out of school on Wednesday after students harassed him about the media coverage.

Funk plans to file a complaint with Manitoba's Human Rights Commission because of the abuse and lack of action from school administrators. She said she has yet to hear from anyone at Murdoch MacKay Collegiate or the River East Transcona School Division about her complaints.

David said kids have picked him up and dumped him in culverts and other unpleasant places.

"People were pretty much putting me in garbage cans," he said.

Sometimes he said he tries to defend himself by biting the bullies.

"I got suspended even though a kid said he said he'd rape me and one said they'd stab me," he said.

The school division said it has a code of conduct in place and takes reports of bullying seriously.

Kelly Barkman, superintendent of the River East-Transcona School Division, said the board will continue to follow that protocol.

"[The policy] starts at the school level, with conversations between school officials and parents about their students' behaviour," Barkman said. "We want to and work hard to provide a safe and caring environment for all of our schools."

But David said teachers have looked the other way when he's been bullied.

Funk said the principal of Murdoch MacKay Collegiate asked her son why he was in the newspaper.

She called that "very unprofessional" and said the principal should have phoned her directly.

While that's frustrating, the overall backing from people on social media has been uplifting, Funk said.

A hockey team has even offered to make David an honorary member, and the owner of a private security company has offered to provide security for the teen while he's at school.