For one Syrian immigrant family, sharing their culturally classic meals like beef shawarma or a falafel wrap has become a path to their healing. After losing two loved ones during the pandemic this summer, they turned their tragedy into triumph by living out their dream of opening a restaurant.

Owners of Daanook Restaurant happy with support, despite opening in worst month of pandemic

For one Syrian immigrant family, sharing their culturally classic meals like beef shawarma or a falafel wrap has become a path to their healing. After losing two loved ones during the pandemic this summer, they turned their tragedy into triumph by living out their dream of opening a restaurant.

In Syrian culture and the Kurdish language, the word daanook represents a stage of cooking bulgur wheat. The wheat is boiled and then the wheat is shared with neighbours as part of of the communal blessing on the food.

Daanook is also the name of the new Syrian restaurant that opened recently in the Exchange District — during the pandemic and during the week that Manitoba's code red lockdown restrictions came into force. The establishment at 58 Albert St. opened on Nov. 10 and offers takeout and delivery services only.

"Canada is like a mosaic of cultures so it's very important if each culture has their own food … we like to participate in that to have the Syrian food," said co-owner Shler Ali.

The family owned restaurant is also operated by Ali's brother, Jwan Ali, her husband, Karwan Kahil, and her sister-in-law, Riwas Kahil, who also have other jobs.

Ali's late brother, Nour Ali, and her father, Hamsa Ali, both died this summer when their boat capsized on Lake Winnipeg.

Nour Ali was known as an influential member in the community who also invested in the economy through entrepreneurship.

He not only operated a renovation business that employed refugees called Thank You Canada, but he actively worked to help other immigrants by starting the Kurdish Initiative for Refugees, Inc.

"My brother was actually a leader in the community and he had a mission of helping everyone in need. So he was working and sponsoring many families," Ali said.

Shler Ali said the Winnipeg community really rallied around their family to show tremendous support this summer after experiencing that personal tragedy.

'People are very loving and supportive'

"He was a main core and the main stone in our life. And by losing them, when we just started to settle down in the city we felt like disconnected," said Ali.

"When we saw the place in the Exchange District — which we consider it Winnipeg's heart, we felt like this is it. It will bring us back. And actually it does. It does. People are very loving and very supportive," she said.

Now that Daanook Restaurant is open for service, people living and working nearby have shown support for the new eatery.

"It was actually great. We didn't expect that," Ali said. "People were loving our food and whoever came, they came back. And I'm happy with that."

Ali said there are distinct cultural differences and regional variations between the same foods you find in North American mass grocery stores and what they make from scratch at their restaurant.

For example, she noted that even though local grocery stores offer diverse flavours of hummus, which is a traditional dip made of chickpeas, there's only one original type of hummus in Syria.

They add their own unique selection of toppings that include pomegranate seeds, whole chickpeas, parsley flakes, black pepper and olive oil to add a pop of colour and flavour.

Ali also explained that baklava pastry has many variations depending on the region it comes from. In the Syrian version they add pistachios to the flaky dessert.

Like many local restaurants, they are not only seeking to survive during the current pandemic, but also to rebuild and thrive — one take-out meal at a time. 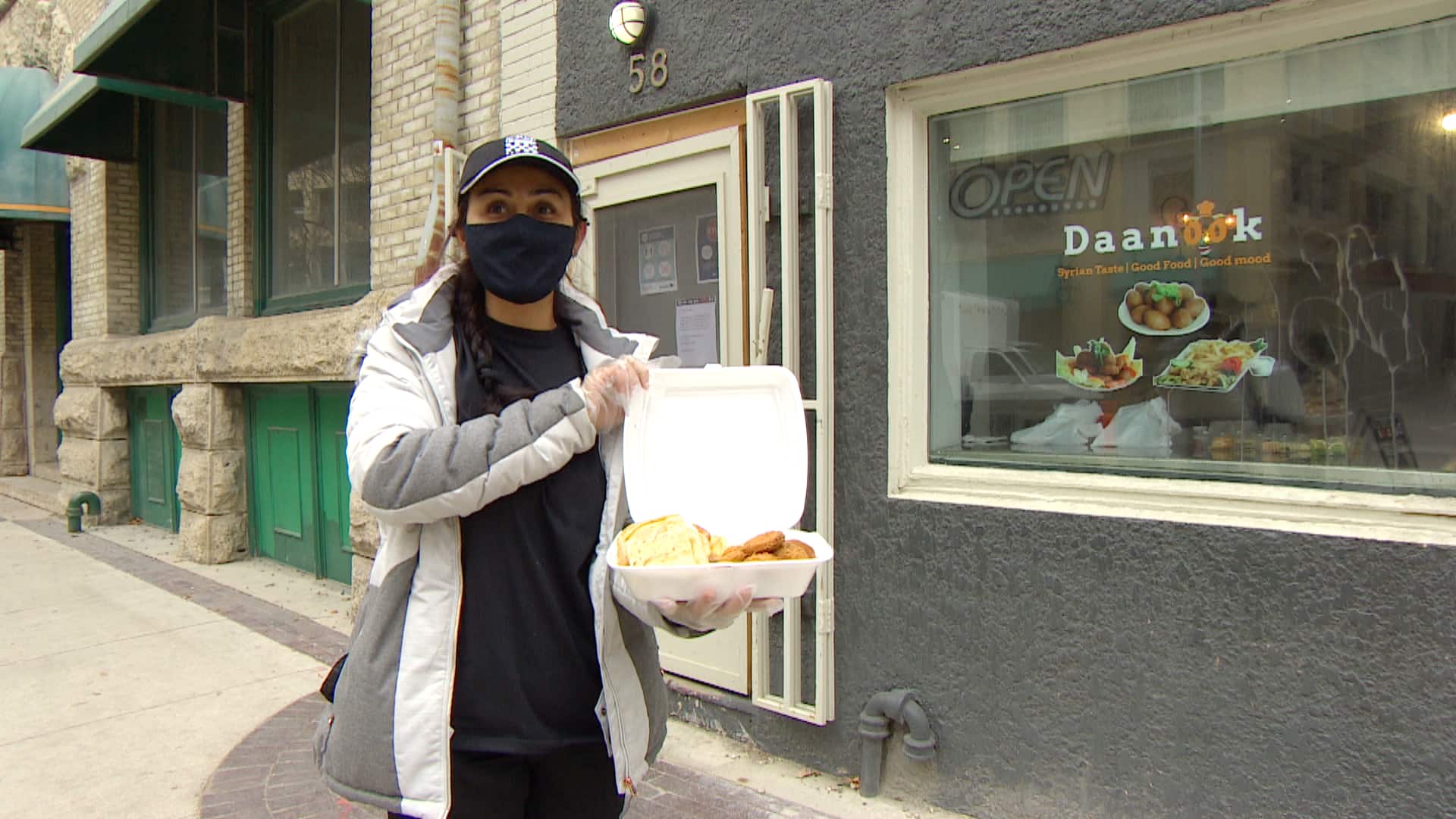 2 months agoVideo
3:37
For one Syrian immigrant family, sharing their culturally classic meals has become a path to their healing. After losing two loved ones during the pandemic this summer, they turned their tragedy into triumph by living out their dream of opening a restaurant. 3:37