Customers of a popular Filipino bakery where a slain 17-year-old worked are showing support for the bake shop by buying pastries in the teen’s memory.

The memory of a slain 17-year-old boy who loved baking with his parents is being kept alive.

"Every bread that I bought from them it's just a memory of Jimboy," said Arlene Pabiz, who stopped by Jimel's Bakery at 660 Sheppard St. on Monday to buy buns and support the slain teen's parents Imelda and Jaime Adao.

Jaime Adao Jr., who also went by Jimmy but was more well-known as Jimboy, died on March 3 after being attacked in his family's West End home in what police said was a random home invasion — likely fuelled by meth.

Pabiz and other customers stopped by Jimel's as it re-opened Monday for the first time since the 17-year-old's slaying.

"It's good to know that they are here, that I can console and pray for them, too, because as part of the Filipino community, we are grieving and we are mourning for what happened to Jimboy," said Pabiz.

'We have to continue his dreams'

Returning to the family's Sheppard St. location was difficult for Jimboy's parents, who are keeping their son's memory alive by renaming baked goods in his name.

"We have to continue his dreams and I will say again and again a million thanks to everybody who supported us. You make us proud of our son and stronger," Imelda said before showing CBC where her boy would make Nutella cookies and purple cake with meringue — just two of his specialities.

"You can feel the love while he's doing those products. It's not because he likes to make them but it's the passion that we're seeing from him. How he's holding the dough and folding it. You can sense that it's really from his heart."

Framed photos of Jimboy in full baking attire, taken while he was making pastries in a culinary arts class at his high school, will soon be displayed at the bakery.

Jimboy's story has impacted people across the country and in Winnipeg, moved one woman so much she put a call out to her friends to support the family by buying their baking.

'Can't fathom what parents are going through'

"I think it was just seeing the parents' brave faces on the news after the memorial for the son," said Michelle Shemeluk, who thought about her own 17-year-old boy when learning about the killing.

"I can't even fathom what the parents are going through."

Shemeluk, who has never been to either the Sheppard St. bakery or the family's other shop on Bannatyne Ave, made her call to support the family on Facebook, which quickly exploded well beyond her friends list into thousands of shares.

"It may feel like the city's unsafe but we want to show that there's a lot of good people behind them to help them go forward," she said.

Other people are showing their support for the family in different ways. One man stopped by the bakery Monday to drop off decals that called for justice for the slain teen.

Danielle De Mesa is a regular customer at the bakery and stopped by to show his support and buy some Filipino buns. He remembers a cheerful teen standing behind the till. "He's a pretty good guy, so nice to people," he said.

Imelda said there are other efforts underway to honour her son, including a scholarship fund in his name that a school trustee is organizing.

Their bakery on Sheppard St. is open from 9 a.m. - 7 p.m. Monday through Saturday. The Bannatyne location is currently closed for renovations. 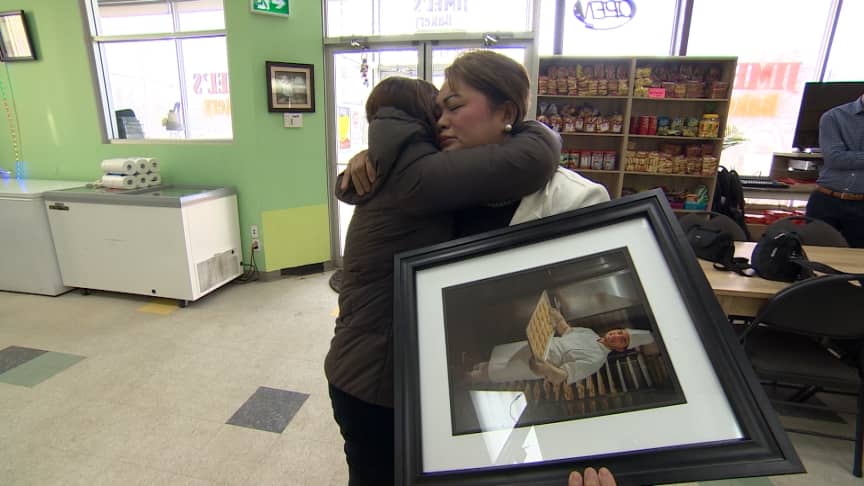 2 years agoVideo
2:15
The memory of a slain 17-year-old boy who loved baking with his parents is being kept alive as Jimel's Bakery reopens in the Maples. 2:15