A Winnipeg man says he remembers exactly when he called the City to fix a curb outside his house, after snow removal. Twenty-six years later he's still waiting.

St. Vital homeowner says it's almost comical how long he's been told he has to wait for curb fix

Calvin Hawley says he can remember the exact moment he found the curb outside his home wrecked by a city snow removal machine.

"I came home from the hospital ... and discovered a large chunk of curb under a whole whack of snow," says Hawley, who lives on Tyrone Bay in St. Vital.

Twenty-six years later, it's almost comical to him.

"It is kinda funny when you think about. It will be a grand day when they actually come out," he adds smiling.

After years of complaints, he finally has a date — in 2037 — but Hawley isn't the only Winnipeg resident waiting decades for repairs to residential streets.

Hawley says he called the City of Winnipeg in the early spring of 1993 and continued to call off and on over the years. He was promised repairs, but no action.

"One time they told me the system for logging complaints had changed and my previous complaints weren't on record."

Still, he didn't give up. He kept calling and as the years passed, the rebar or reinforced steel used to strengthen the curb gradually became more exposed and crumbled.

"It's not even jagged cement anymore. It's been here so long, it's weathered to a smooth state."

Hawley says the final straw came on July 1, 2017, as he was woken up by the sound of City of Winnipeg crews on his street.

"I was watching crews merrily drive past the front of my driveway to stop and repair other curbs on the other side of the bay that weren't as damaged as mine or as old."

But, there are others on the bay dealing with the same problem as Hawley. Across the street, a chunk of curb has been knocked off so long ago, grass has now grown down to the driveway where the curb used to be, while other neighbours have gotten creative, placing larger decorative stones between broken pieces of concrete.

This time, he emailed 311. He was given a number to check his file and request.  When he went online to check it, the file said his curb would be repaired by June 26, 2037.

"It's 26 years old right now, if you do the math and they don't get around to doing it until their target date of 2037. Then this is damage that would have sat here for [44] years. How is that reasonable?" says Hawley.

When asked what was a reasonable time for repairs to be completed, once a call or email comes into 311, a city spokesperson said it first needs to be inspected and if it's a hazard, repaired by priority.

But, if it isn't hazardous, Ken Allen says it will be inspected and added to a service request maintenance list, which could take more than a year to address.

That explains Hawley's target date: he filed his complaint electronically at 3:01 p.m. on July 1, 2017, so the city system set a target just before the Canada Day long weekend, 20 years later.

Councillor for St. Vital Brian Mayes says he's been getting calls and emails on lengthy timelines since he became a councillor in 2011.

"I've got some in hand from Knightsbridge where all the people were told repairs were coming in 2030s. People will be dead by then or all the councillors will have changed," says Mayes motioning to a series of old emails he received from other homeowners.

He said it is costly to repair the odd curb, and is more cost-effective to do it when the rest of the street or bay is getting paved.

But, Hawley says his street is in good condition and doesn't need to be paved anytime soon.

"While I do understand some of these piecemeal repairs can add up and be time-consuming and costly. Surely to goodness it costs less to repair some curbs than paving the whole street," pointing to a number of curbs around him that need work, too.

Councillor Brian Mayes says he's glad Calvin Hawley has brought this forward and will bring the issue up again with the city's chief administrative officer — asking the 311 department to give a more realistic idea of when things will actually get fixed.

The last time Mayes dealt with a similar complaint on Weaver Bay, he said it took him seven years of pressure on the public works department to get curbs fixed there.

"Hopefully, before I'm out of office we'll knock off [Hawley's]," said Mayes, smiling.

Hawley is hopeful too but he has another prediction of how things may actually go.

"My own personal bet is we'll probably have it replaced and then in the spring they will come and re-pave our street and rip up the curbs again," he says laughing. 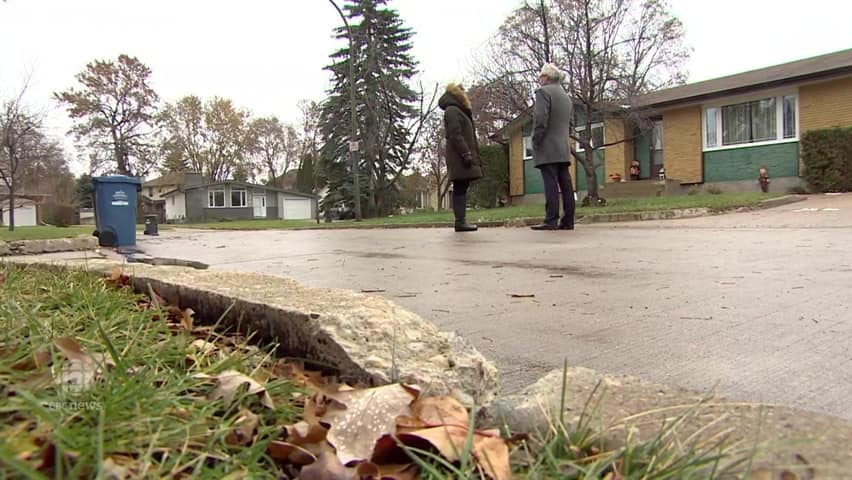 12 months ago
2:43
The city curb outside Calvin Hawley's house on Tyrone Bay in St. Vital was damaged 26 years ago, and hasn't been fixed despite numerous calls to the city. 2:43

Eleanor has more than 15 years of experience in television news as a producer, reporter, anchor and host. She has covered everything from politics to consumer trends but is most driven to find local stories that resonate or have an impact on the community. You can reach her at Eleanor.Coopsammy@cbc.ca Twitter: @ECoopsammy