'Fireball in the sky' erupts during pipeline blaze south of Emerson 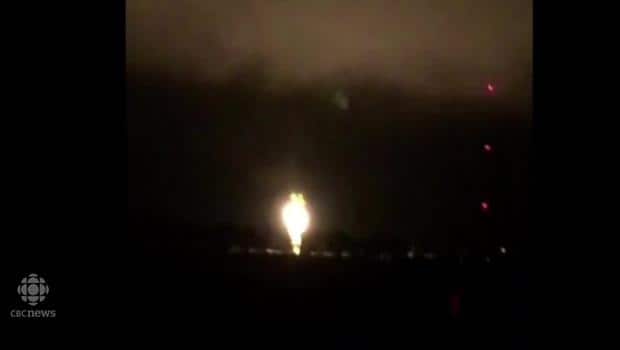 RAW: TransCanada pipeline shut down after large fire near Emerson

6 years ago
0:18
TransCanada was forced to shut down one of its natural gas pipelines Saturday night after a massive fire about 50 km southeast of Emerson, Man. 0:18

A TransCanada spokesperson said the fire started in the yard of the St. Vincent Compressor Station at about 9 p.m CT in Kittson County, Minn.

"When we got there it was just one big fireball with a big rumbling," said French. "You could hear the rumble probably 20 kilometres away."

French said the flames were also visible kilometres from the compressor station.

"It just looked like a huge fireball in the sky," said French. "It makes it look that much bigger when it's dark. It was probably 40 feet high; it was probably 10 to 15 feet wide at the base."

The fire burned until about 1:10 a.m. Sunday, TransCanada said.

One or two homes in Dominion City were evacuated Saturday night as a precaution, French said, adding people were allowed back in their homes about an hour later.

French could not confirm if there was indeed an explosion, but said he spoke with people in the area who reported hearing "a big boom."

TransCanada said the facility has been shut down and the pipeline has been isolated.

Investigators are looking into the cause of the fire.