Winnipeg police say 'time for education' over, will crack down on parties to curb COVID-19

Fines for individuals breaching public health orders are set at $1,296

"Our job is making sure people understand how serious this is and we are going to do that through fines," Winnipeg Police Service Const. Rob Carver said at a Wednesday morning news conference.

Rule breakers will find that a large party in pandemic times is a higher priority for police than it would have been a year ago, he said.

Calls will be triaged based on a number of factors, including whether they involve an urgent public safety concern, he said.

Not every call will get immediate action but when officers do go out, they will be primed to hand out penalties that hit people hard in the wallet.

Fines for individuals breaching public health orders have been increased to $1,296 — the second-highest penalty of its kind in Canada.

"We've been doing education [about the public health orders] for a long time and the numbers [of cases] have continued to go up," Carver said. "So now, we will be focusing less on education and more on enforcement.

"I think the time for education has passed here. The numbers are terrible."

People making reports to police are asked to call 311, not 911, in order to keep the emergency lines open, Carver said.

Premier Brian Pallister, who has raised the prospect of a daily curfew, said on Tuesday it would only work with buy-in from Winnipeg police and RCMP to break up "the big house parties that have been happening."

"To get that message across, if we have to start fining people, we're going to do that," Carver said.

This is a signal [we are serious]. The numbers are up, our response is up.- Const. Rob Carver

Shortly after the news conference, officers showed up at an anti-mask rally outside city hall, fining at least one person for breaking the public health orders.

Pallister and Chief Provincial Public Health Officer Dr. Brent Roussin have said enforcement of the COVID-19 protocols is a key part of their strategy to stamp down the surge in cases.

Like Carver, they have said people don't seem to be listening to repeated requests to adhere to current restrictions, so increased penalties and stepped-up enforcement are necessary.

"This is a signal [we are serious]," Carver said. "The numbers are up, our response is up."

He said he is not aware of any additional expenses that would be required for police to enforce a curfew, if it does come into effect, and doesn't foresee it being an issue.

The police service would continue to devote resources to issues of public safety while finding a way to handle any curfew response, he said.

"We've managed before in tough situations and we will figure out ways to manage that," Carver said.

Fines levied outside of Winnipeg

In another development, Manitoba RCMP say they received 182 calls between Oct. 26 and Nov. 1 related to COVID-19 rules being broken.

In five instances, officers gave verbal warnings and in three offenders were ticketed.

Stonewall RCMP fined an intoxicated woman for not wearing a mask on Oct. 28.

On Oct. 30, Cross Lake RCMP fined a homeowner for having more than five people in their home at a time when that community was under restrictions because it's red, or "critical," according to the province's colour-coded pandemic response system.

Finally, on Oct. 30, Norway House RCMP fined a person who wasn't self-isolating as they had been directed, even after being warned in the past.

"The focus of our officers since the very beginning of the pandemic has been on providing education and issuing warnings. However, with the dramatic rise in cases across the province we recognize that a shift is now required," said Chief Supt. Rob Hill of the Manitoba RCMP.

"This is about protecting the health and safety of every Manitoban. We all need to do our part to help reduce and stop the spread of this virus."

Manitobans living outside of Winnipeg should not to call 911 for COVID-19-related issues. Reports of non-compliance can be made to the province at 1-866-626-4862. 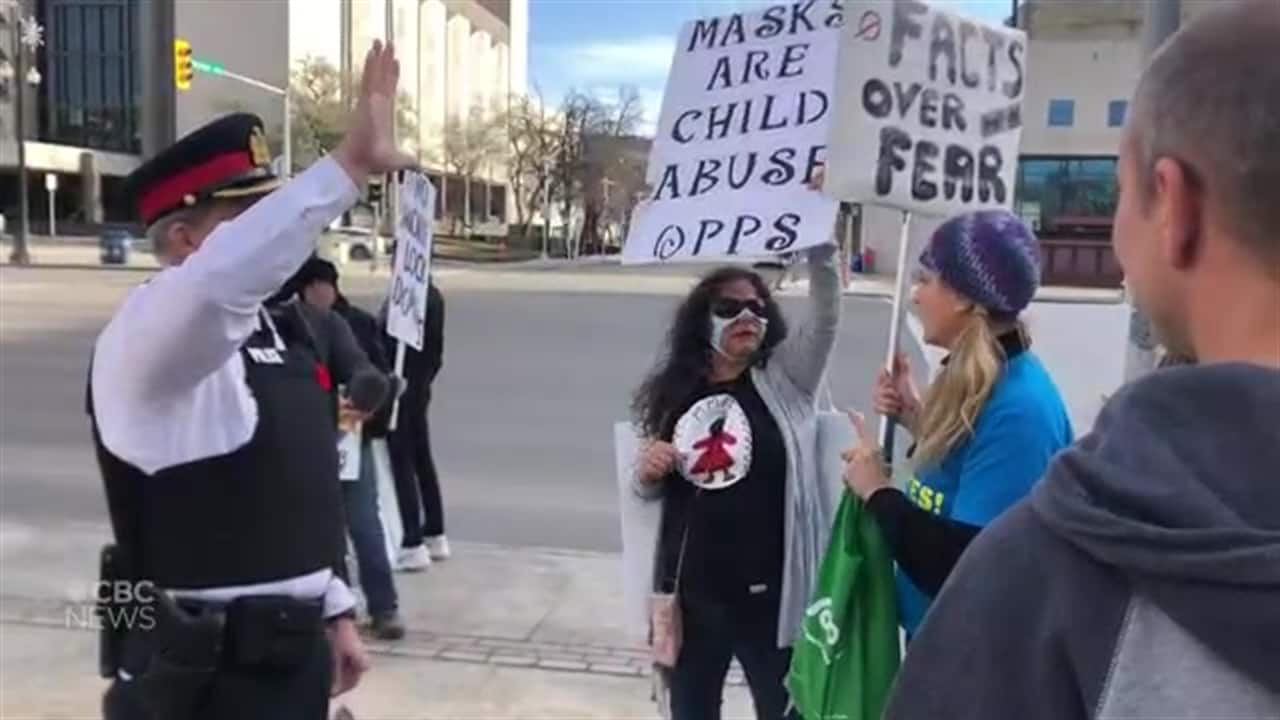