Couple builds Viking hut of their dreams during pandemic downtime

With time to kill and a passion for reliving history, a couple in St François Xavier built the Viking hut of their dreams

With a passion for reliving history and hand tools appropriate to the era, a thatched roof hut was built

Most pandemic pastimes are designed to help you live in the moment, but for one St. François Xavier couple, it's all about spending time in the past.

In the backyard of their home, a stone's throw from the Trans Canada Highway, Wendy Speary and Pedro Bedard tend the fire outside their brand new Viking hut. Bedard chops wood with his handmade axe, while a pot he forged from steel plates hangs above the flames.

"So hopefully it will survive the winter. We don't know, we've never done this before."

The couple spent much of their spare time from May to September building the hut. And while they may be new to the world of mud walls and thatched roofs, they're no stranger to rebuilding history.

Bedard's been the blacksmith at Festival du Voyageur for 32 years. And as members of the Hands of Lugh, a historical society focused on reenacting the Viking Age, the couple is a fixture at Gimli's Icelandic Festival.

They've spent years sewing clothes, forging tools and cooking food like the Vikings did. They find doing history is the best way to learn about it.

A pain in the grass

With the Icelandic Festival cancelled, and Speary's business closed or on reduced hours due to the pandemic, they found themselves with time to kill, creative energy to burn and a dream to fulfil.

"We've been wanting to do it for a long time," Speary said. "This just seemed like the perfect time."

But when Speary and Bedard take on a project, they don't cut corners. They do it the Viking way.

Their plans were based off a study they found on Viking building techniques, but they had to adapt.

Manitoba doesn't have the thick reed straw ideal for thatched roofs, so they settled for prairie grass instead — about 175,000 individual strands they estimate — painstakingly organized into bundles of 100 before layering them on top of each other to make the roof.

"It's more grass than you could ever imagine," Speary said. "I'm so sick of grass."

A hut built by hand

Power tools were also taboo. Instead, they tried their best to use tools and techniques available in Scandinavia from 793 — 1066 CE, which Bedard says are more advanced than you think.

"They were master craftsmen," he said, adding that saws and simple hand drills were commonplace.

Their daughters also share their love of historical reenactments, and couldn't pass up a chance to get in on the laborious action — helping with thatching and putting up the mud walls.

"It was just a great big mud fight," Speary said.

The hut was in good enough shape to spend a night just as it started to get cold outside. And despite their small, wooden bed frame, topped by a crunchy canvass bag stuffed with grass, the couple says they still managed to get a decent night's sleep.

"The sound of the highway is a lot more prominent out here than it is in the house," Bedard said.

"But you just get used to it and call it the sounds of the ocean." 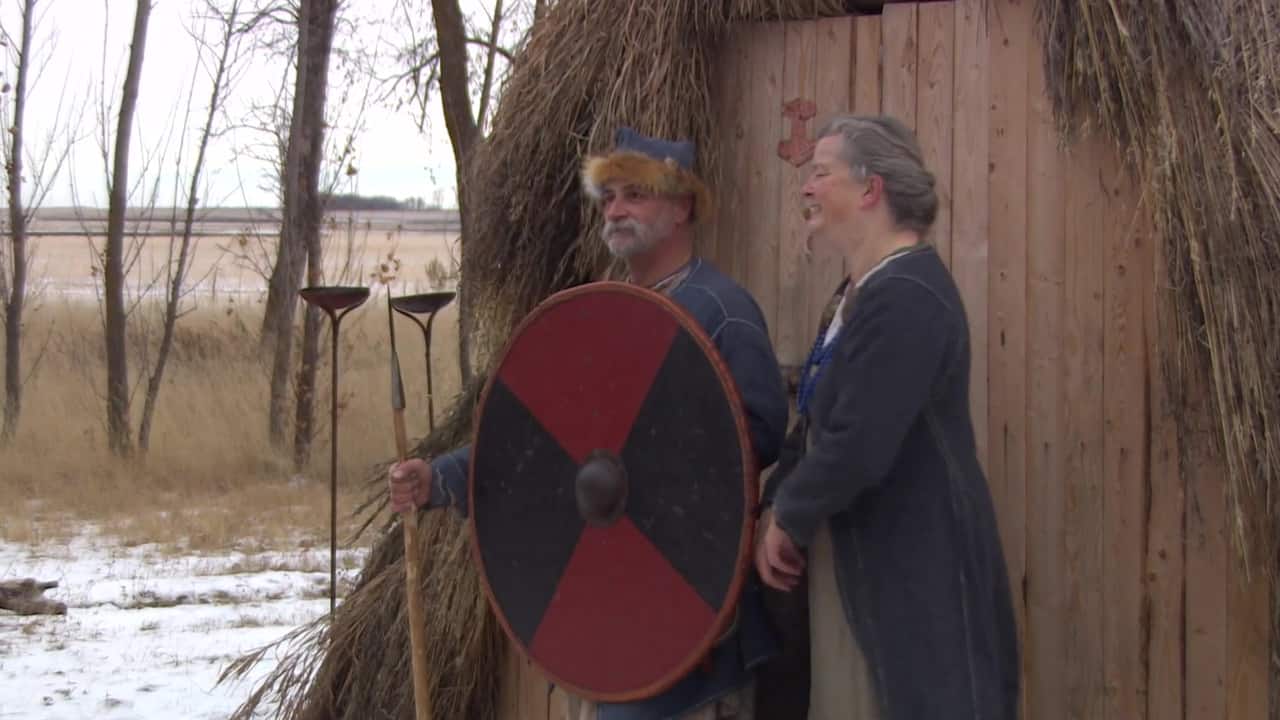 3 months ago
2:42
In the backyard of their home, a stone's throw from the Trans Canada Highway, Wendy Speary and Pedro Bedard tend the fire outside their brand new Viking hut built during the pandemic. 2:42

Born and raised in Winnipeg, Cory cut his teeth as a business and politics reporter in Halifax before moving home to join CBC Manitoba's current affairs team. He's also lived, worked and studied in Ottawa and St. John's. You can email him at cory.funk@cbc.ca or message him on Twitter @CoryJFunk.