The consultant brought back to study Winnipeg's hospital reorganization plan says he hasn't been told to examine the timeline of the planned closure of Concordia Hospital's emergency department.

The consultant brought back to study Winnipeg's hospital reorganization plan says he hasn't been told to examine the timeline of the planned closure of Concordia Hospital's emergency department.

And Dr. David Peachey says he's received no directive on what recommendations to make about the ER, slated for closure in late June — a plan which now seems to be in jeopardy.

"We were given literally a blank piece of paper and asked to make this independent assessment, but nobody said, 'When you're looking at it, look at this piece or that piece,'" the doctor-turned-consultant said on the phone Friday from Halibut Bay, N.S.

The Manitoba government revealed on Thursday it would lean on Peachey — whose advice formed the basis of the province's health-care revamp, which started in 2017 — to study the effectiveness of the overhaul.

'No opinions' yet on Concordia ER

Specifically, he's studying Phase 2 of the revamp, highlighted by plans to shutter Concordia's ER and convert the emergency room at Seven Oaks Hospital into an urgent care centre this September.

That follows the closure of the emergency room at Victoria General Hospital and the urgent care centre at Misericordia Health Centre during the first phase of health-care reform. The plan to consolidate emergency care in Winnipeg from six locations to three locations is designed to cut wait times and find efficiencies.

Health Minister Cameron Friesen appeared to suggest the closure of Concordia's ER might be delayed, when he wouldn't commit to a date this week. He said he wouldn't sign off on the change until he was convinced the ER at St. Boniface Hospital, under renovation, has the capacity and staffing to accommodate the anticipated influx of patients.

Peachey said the fate of 24-hour emergency care at the northeast Winnipeg hospital is obviously something he's looking at, but he hasn't made up his mind.

"I have literally formed no opinions in terms of where this might land," Peachey said, adding government and health officials are not interfering.

"They're not directing me in any way, but there's no restrictions on it either. If we feel that things are OK, we would say that, but if there are things that are astray, we would be asked to defend why we thought they were astray."

He wouldn't say where he is leaning after his first week of interviews, but early indications are the "transformation is absolutely in the right direction," even if some people disagree.

"Not surprisingly there are diverse opinions and each opinion gets probed, but there's not uniformity across the board, which is what you would expect," he said, explaining that massive change to this degree is bound to be difficult.

Peachey said it's too early to say  what the overhaul has done for patient care, but his team is looking at the data.

He's returning to Winnipeg next week to speak with more health-care stakeholders, including the nurses union, he said.

"We look forward to receiving his insight in the next two weeks as we continue to build on the plan's early success," a government spokesperson said in an email, pointing to emergency wait times and waits for personal care home placements as successes.

Consultant hired for under $100K

Peachey was approached by Shared Health three to four weeks ago to lead the review with a May 17 deadline, which he said is tight but not unreasonable.

The province said the cost of bringing Dr. Peachey on board for the "quality assurance assessment" is under $100,000. The former NDP government paid the consultant more than $1 million in 2015 to produce his report, the province said.

The NDP government was defeated in 2016. Peachey's report was delivered to the Progressive Conservative government in 2017.

Dr. David Peachey speaks about the state of health care in Winnipeg in 2017: 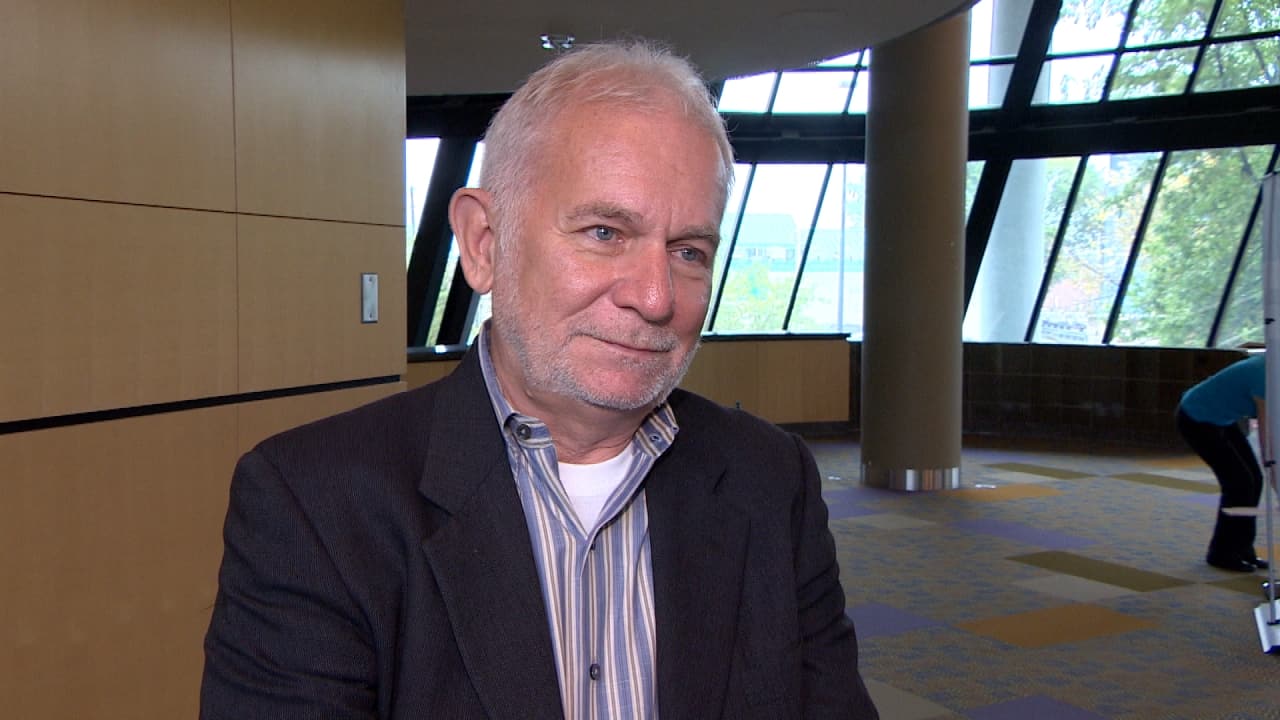 3 years ago
5:45
Dr. David Peachey was in Manitoba on Tuesday to speak at a news conference for the first time since he presented his report, Provincial Clinical and Preventive Services Planning for Manitoba: Doing Things Differently and Better. CBC's Erin Brohman spoke to him to hear his thoughts on the province's progress. 5:45

The Winnipeg Regional Health Authority did not follow Peachey's recommendations to a tee, though.

His report proposed conslidating Winnipeg's emergency care in three locations, while the other three ERs would become urgent care cares. Victoria's ER was converted to an urgent care centre, which is also the plan for the ER at Seven Oaks. The government has previously said Concordia's ER space will become a walk-in clinic.

Peachey said he felt strongly at the time that three urgent cares, not two, are sufficient.

He wouldn't say if the WRHA got it wrong.

"I honestly don't know. It's certainly an area that we're exploring and when we go to each hospital, we're exploring that very fact," he said. "It would be premature, I think, to say that we couldn't shift our position."

On Friday, the Manitoba Nurses Union implored Dr. Peachey in an open letter to consult with nurses, who are rattled by a spike in patient volumes that has strained staffing and resources.

"In order to ensure you understand our concerns, I urge you to meet directly with nurses on the frontline, who know firsthand the effects these changes are having on patients, and their own ability to provide care," the letter reads.

NDP Leader Wab Kinew said the consultant should be listening to these perspectives, not the voices of management.

"The issue that I have with what I'm hearing is that everyone seems to think that this health-care plan and the government is a disaster, except for a couple of managers and consultants, and I don't think that they should rule the day."