What do you get when art meets community? A better sense of belonging

We invited 12 local artists to come into our building and paint a piece of the CBC gem logo in their distinct style, but with a focus on our people, our community, our land. They gave us back something wonderful.

1 year agoVideo
2:14
Winnipeg artist Nereo "Scenereo" Eugenio, was one of 12 artists to create a mural in the storied Studio 41 at CBC Manitoba. He explains his piece which sits at the centre of the CBC logo and talks about collaborating with other well known artists. 2:14

At the CBC Manitoba building on Portage Avenue in Winnipeg, we have this big old studio. It's called Studio 41 and it's been host to a great number of events and shows over the years. Think old school shows like Fred Penner's Place, The Guess Who, Hymn, Sing, Reach for the Top, It's a Living to newer events like Dragon's Den auditions, political debates and Flow in the Dark.

But, like many old studios, it's not much of a looker. Just blank walls and vintage electrical thingys. So, this past summer, we thought a pop of colour could liven up the joint and give us something interesting to look at.

We landed on a mural. One that would reflect our community and the land we call home. A visual statement that could show the creativity of an individual, but also reflect a sense of collaboration. Our goal was to have an energetic piece of local art live within the walls of CBC Manitoba that felt deeply rooted to our city, our province.

The 12 artists were given the theme: A reflection of the community/land we live in/on and asked to interpret it in their own personal voice and style. They each worked separately on their pieces — not knowing who was doing what, where — to collectively give this back to us:

Each day an artist was in studio, we would get lovely surprises of colour and craft as we watched the individual pieces take shape with each brush stroke. And we're beyond proud of the final piece.

And we are honoured to have had the following artists participate on this project.* Each one came with a different concept and a boatload of enthusiasm.

"As far as I have gathered thus far, I know that many people point to Indigenous peoples as the keepers of the sacred. They knew how to honour the earth and all that lived on it. They knew about the practices in which to preserve the earth. Fast forward to modern times and I feel a lot of those traditions were lost or forgotten. I chose the symbol of the bison because I see this animal as a symbol for honouring all that came before us."

"I chose to represent the bison with multiple colours because, to me, having a diverse colour palette represents a colourful community. There are symbols in the piece such as the down arrow that hint at grounding ourselves and discovering the roots of who we are as human beings and also the common thread that led us to where we are now. I feel that if we were to truly trace our origin stories as far back as we could possibly go, I think we might discover that perhaps we all come from the same grandmother."

"But what do I know? I just paint what intuition guides me to do."

"Nothing is more Manitoban
than the majestic polar bears
of the Western Hudson Bay migration,
and flag trees worn bare from
the strength of the north winds."

"My piece is about diversity, when I think of Manitoba, I think of all the many cultures we have that live here, the ribbons represent the acceptance of all communities, being proud of your individuality."

"The flowers are the prairie crocus which is Manitoba's provincial flower. And lastly the northern lights forming out of her hair."

"I wanted to display an excited and enthusiastic young person. This is how I feel when I get to learn, build and create things. Behind them are symbols for ways in which I can do these things. I am not wealthy in monetary funds, but I can give back with my experience and knowledge."

"I believe mentorship is very important and I would like to raise my son as an empathetic giving person. I used a photo of my son as I find it's more important than ever to show him that creating, teaching and giving is what makes me most happy."

"The painting suggests to the viewer a manipulated linear landscape. This can be seen as our Manitoban landscape or can also be taken as a universal one."

"It is a spontaneous painting, displaying humanity's beauty and struggle during this modern era."

"I am most proud to have found home and community within Manitoba because of two distinct elements: one being the wilderness and diversity of the natural beauty here; the other being the eclectic strength and supportive nature of Winnipeg's artistic community."

"My choice to create an image of native plant-life for this collaborative mural felt like a way of celebrating both of those elements at once. The lady slipper is a home-grown treasure that I have discovered growing wild in numerous locations in this province, and the sight of it is always a wonderful and inspiring surprise."

"With recent events of the release of the final report of the national inquiry into missing and murdered Indigenous women and girls, I felt a need to celebrate the sacred medicine of sage as it is a woman's medicine."

"The medicine represents the teachings of wisdom, strength and clarity, as it is the women who carry these traits and it is the women who will help us heal as peoples and a nation. The abstract rendition references sage flowers and the colours of the plant in its various forms."

'Together' by Matea Radic

"My piece of the logo represents a person who is a part of a larger network of people who have come together to raise awareness for a communal cause."

"Our individual voices may not seem powerful, but they are. They just get stronger when we work together."

"Mino Bimaadiziwin means the Good Life in Anishinaabemowin/Ojibwe language. I feel that's something we're all working for. I painted a fancy shawl dancer in a red dress to accompany the lettering for a lot of symbolic reasons."

"If you want to know more, look for the origin story of the fancy shawl dance and about The Red Dress Project. Miigwetch!!!"

'Night and Day' by Kailey Sheppard

"Since I was given two mirrored sections, I decided to play with the idea of night and day. In my day piece I show a wheat field which the province is known for, and a raven which is of significance to me. I used the red circle to represent a red hot sun and as a pop of colour."

"My night piece shows the city since Winnipeg has a bustling nightlife. And a white circle for the moon."

'Icons' by Maia and Luke from ArtCity

Maia and Luke chose to depict two of Winnipeg's most recognized icons: The Manitoba Legislative building and the Canadian Museum for Human Rights. One at dusk, the other at night.

These are artists I love and respect and I think it's beautiful that we're all coming from different walks of life. Everyone's approach is different, but we're similar in that we're all unified under this mission of wanting to create something beautiful.- Nereo "Scenereo" Eugenio

Watch the Studio 41 art Project come to life in this time-lapse video: 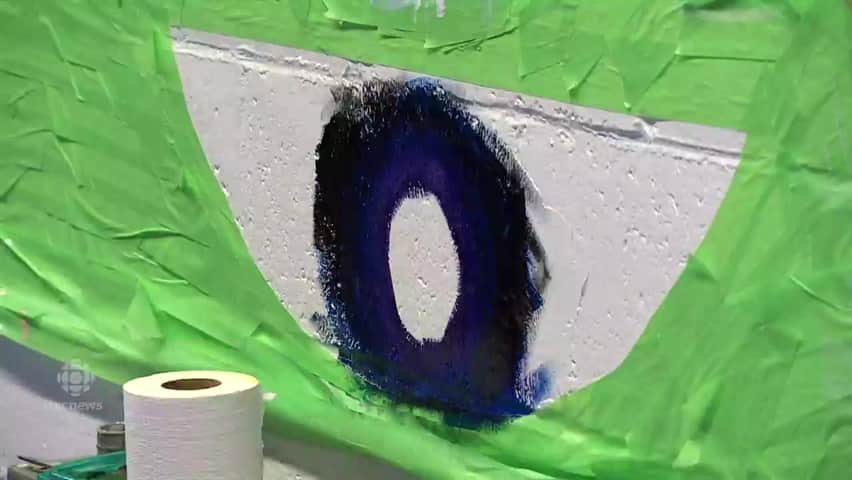 1 year agoVideo
1:56
Twelve local artists created a mural of the CBC gem in Studio 41 studio that is a reflection of the community and land we live in. 1:56

See the mural in person

If you would like to see this beauty in person, maybe take a selfie in front of it, sign up for one of our broadcast centre tours. They're FREE!

Sign up for CBC Manitoba's newsletter for stories happening in our community and to stay on top of the latest in CBC TV, Music and Arts. We curate the best of the best just for you.

* We came up with the titles for each piece, not the artists.