With Winnipeg in a deep freeze, a handful of shelters have deployed extreme environment response vans to help people get to a warm bed for the night.

On nights when most Winnipeggers are snug and snoozing in their beds, Mark Stewart is out roaming the city's frozen streets, looking for people to help.

Stewart is the director of the Salvation Army's emergency shelter. When temperatures drop below –10 C, he gets behind the wheel of their extreme environment response van to ensure homeless people have the opportunity to escape the cold in a warm bed.

"The vulnerable people within our community in this area don't always have safe places to go, we want to make sure we're available," Stewart told CBC News during a ride-along Monday night.

During the winter season, most shelters are already bursting at the seams, many routinely exceeding capacity. The Salvation Army has a rule never to deny anyone seeking shelter a space, but not everyone can make their way to the Main Street location.

So Stewart sets off into the night with blankets, gloves, socks, and jackets in tow.

"We're showing people support and trying not to allow anyone to fall through the cracks."

The Salvation Army is one of a handful of local organizations that operate extreme environment response vans. Theirs is an ambulance, donated by the group's Thunder Bay chapter three years ago. When they enact the emergency shelter rule, it's out on the streets every night from 11 p.m. to 4 a.m.

On Monday night, Stewart combed the streets of downtown Winnipeg, looking for anyone caught in the bad weather.

The first places he usually drives by are the other shelters.

"We're going to swing by the other shelters, we just want to drive around and make sure there is nobody struggling visibly to get to a shelter that's closed," he said.

In the almost two hours the CBC crew spent on the ride-along, Stewart spoke to nearly a dozen people, half of them needing gloves, toques or coats.

He insists it's important to properly check all the side streets, back alleys and bus shelters when out.

"This isn't about speed, we take our time and look for people."

After initially passing by a bus shelter in the Exchange District and believing he saw something, he returned a few minutes later, and found a homeless woman. For privacy reasons, CBC is not identifying her by her full name.

The woman, Kylie, was on her way to the Main Street Project, but her feet started freezing due to a lack of adequate winter footwear.

"I needed a place to sleep."

Stewart said he knew Kylie from before. He wrapped her up in some blankets and escorted her with her belongings to the vehicle.

Less than 20 minutes later, she was checked into a warm bed for the night.

While not all folks ended up going back to the shelter Monday night, a few people, like Daniel Morgan, were in desperate need of warm clothing.

Morgan, an artist by trade, was spotted by Stewart trying to sell his art on the corner as snow came down. He waved the vehicle down, and eventually was given new gloves, and a winter coat.

"I've never had a winter coat, this is the first one ever. I only had a windbreaker," said Morgan.

"I actually feel 10 degrees warmer right now. I was just shivering on my way to go warm up."

Morgan declined a ride, but asked Stewart to come back around a little later, unsure of how long he could last in the cold.

Not everyone wants the help. Just this past Friday, Stewart was turned down by 43 vulnerable people.

"We're out here trying to connect with people who don't want the service for many different reasons, due to mental health or not having good experiences within the system," he said.

"We just let them know we care about them and they're not alone, and when they're ready we'll be there for them."

He admits it's tough being turned away.

"It does concern us, that's why we're out every night trying to connect with people who don't want service," he said.

"Let them know they're not alone, and when they're ready we'll be there for them."

If anyone is looking to assist the shelter's cold weather program, they are in need of more winter jackets, socks, gloves and any other warm clothing. 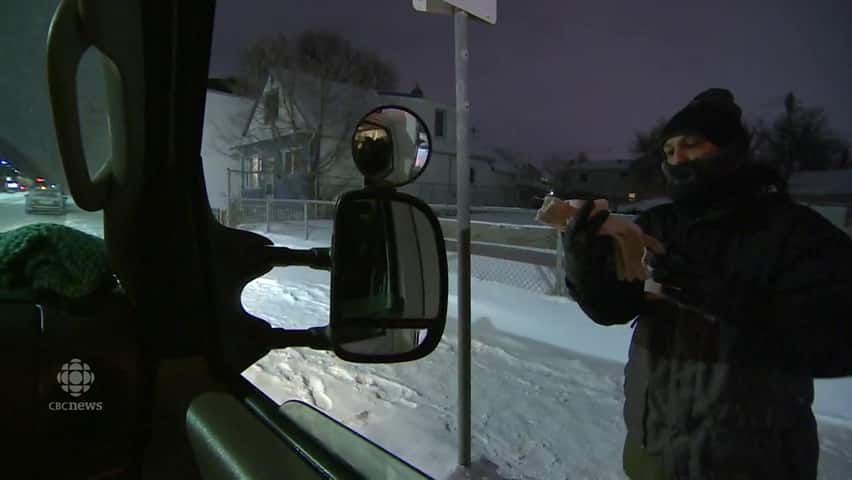 Cold-weather response van helping those on the streets

2 years agoVideo
2:42
In the almost two hours the CBC crew spent on the ride-along, Mark Stewart spoke to nearly a dozen people, half of them needing gloves, toques or coats. 2:42
CBC's Journalistic Standards and Practices|About CBC News
now