2016 looks very similar to 2015 for the City of Winnipeg's budget; the plan is to balance the books this year with a 2.33 per cent property tax increase, an increase in frontage levy fees, creating brand new fees, and pulling money from the city's reserve funds. 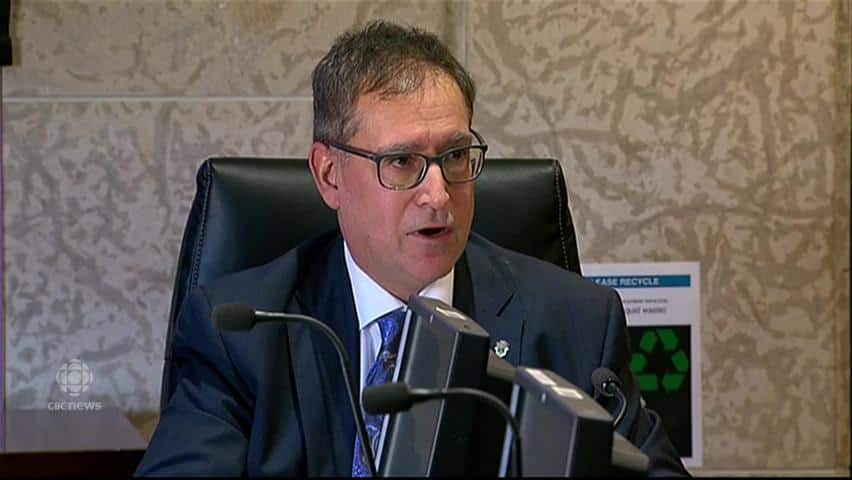 5 years ago
2:12
2016 looks very similar to 2015 for the City of Winnipeg's budget; the plan is to balance the books this year with a 2.33 per cent property tax increase, an increase in frontage levy fees, creating brand new fees, and pulling money from the city's reserve funds. 2:12

2016 looks very similar to 2015 for the City of Winnipeg's budget; the plan is to balance the books this year with a 2.33 per cent property tax increase, an increase in frontage fees and pulling money from the city's reserve funds.

The preliminary operating budget for the City of Winnipeg was tabled Wednesday afternoon, revealing  property taxes will go up again by 2.33 per cent, translating to a $38-per-year increase for average homeowners who have a house assessed at $288,190.

"Every cent of this year's of the proposed property tax increase is being invested directly into infrastructure including our roads, streets, sidewalks, and the future southwest rapid transit way," said Mayor Brian Bowman on Wednesday.

But most Winnipeggers CBC spoke to on Wednesday were not thrilled to hear about the hike.

"I really wasn't happy with it at all," said Lyle Salo.

"I know city hall has a lot of places they can cut the fat and dumping the load on the taxpayer, all levels of government are trying to do it and we've only got so much money to give."

Roneldo Alad said it becomes difficult for people to afford the tax hike, especially if they're not getting a raise.

"We pay every year and our income's still the same," he said.

According to Sharon Dziadyk, if the money goes toward the roads it's worth it.

"If it's going to the light rail … then I think it's a waste of money," she said.

"For our city, that's not a necessity compared to so many other things we need, especially the roads." 5 years ago
0:55
2016 looks very similar to 2015 for the City of Winnipeg's budget; the plan is to balance the books this year with a 2.33 per cent property tax increase, an increase in frontage levy fees, creating brand new fees, and pulling money from the city's reserve funds. 0:55

The frontage levy is also increasing again this year from $4.35 to $5.45 per frontage foot, which will cost the average homeowner $55 per year on a 50-foot lot.

"The thing about the frontage levy increase is we've listened to Winnipeggers who want us to fix the roads and deal with the infrastructure deficit," Bowman said.

Coun. Marty Morantz, who is the city's finance chair, denied the move was an attempt to raise taxes while honouring Mayor Brian Bowman's campaign pledge to limit property tax increases to the rate of inflation.

"When we raise the frontage levy, and we invest that money directly into infrastructure ... it's something people can see. It's tangible," said Morantz. "Unlike the general aspect of a property tax increase where people aren't exactly sure how their money is being spent ... [people] can actually see where that money is going."

The city has repeatedly indicated Winnipeg property taxes remain among the lowest in Canada, but their comparisons are not adjusted for the average home price — meaning other cities pay more in property taxes simply because their homes are worth more, not because rates are lower.

The city also plans to raise $8 million by introducing new more than 100 new fees and raising others, including a range of new encroachment fees primarily for businesses ranging between $1,500 to $3,700.

"Municipalities are moving more and more towards cost-recovery," said Morantz, who added the fees are being applied to people who need specific permits, rather than all taxpayers. "Basically we are actually recovering our actual cost from these fees."

The preliminary budget also introduced a new $15 fee for a third bag of garbage collection, while revealing the city is considering a 911 fee that would be applied to all phone bills (not a fee that would apply to actually calling 911) that would go toward paying for the cost of the service.

"This budget is not just about revenue," said Morantz. "We found $11.1 million in efficiencies ... we had just over $6 million last year."

Morantz said he wasn't aware of any job losses tied to this year's savings.

The forecast is to find $40 million over the course of Mayor Brian Bowman's term, he said.

How is the city spending that money?

The city's largest expenditures include police, streets and fire-paramedic services.

"The escalation in policing costs in Canadian cities ... is simply not sustainable," said Morantz, who added the police board is aware of that. "We're hoping we'll see increases in the future that are closer to inflation."

The increase in property taxes, though, is going entirely to street renewal and transit.

Total spending on local and regional street renewal will reach $105.2 million this year, a record for the city.

The Canadian Federation of Independent Business (CFIB) said a six per cent increase in operating spending is not sustainable.

"Small business owners are concerned that the City of Winnipeg continues to ignore their spiraling operating costs, which are growing at twice the sustainable rate of inflation and population growth," wrote Elliot Sims, CFIB spokesperson in an email to CBC.

Winnipeg's business tax rate is being cut to 5.3 per cent, down from 5.6 per cent.

The preliminary budget also calls for an increase to the number of businesses that can access the small business tax credit.

Businesses with a rental value of $32,220 or less will be eligible for the credit this year. Last year, the limit to qualify was $30,000 or less.

Meanwhile, the city is predicting a $51.7 million deficit for 2017, less than half of what was predicted last year for the same year.

Arts spending is getting a boost again this year, continuing on promises made last year to increase funding to $7 per capita to a total of $5.145 million.

$1 million has also been earmarked for the Winnipeg Art Gallery's Inuit Art Centre, part of a five-year commitment to spend $5 million on the centre.

Other bits and bites include an increase to the city's accessibility funding by $75,000 this year, bringing the total yearly spending to $425,000 this year and a double in spending on the city's reforestation efforts.

Meanwhile, $150,000 is a new commitment to the community homeless assistance team, and $100,000 has been allocated for an off-leash dog park master plan.

The city is also hoping to raise between $30,000 and $40,000 per year by charging $500 for civil ceremonies at city hall, a first for Winnipeg and a move other municipalities have already made.

Something borrowed, something blue

Also contained in the 2016 preliminary budget is a new revenue source—marriages. Couples will now be able to get married at Winnipeg's City Hall at a cost of $500 per wedding service.

This year's budget still has to be approved by city council.