A report on expropriating some land to build a retention pond slams the city for being secretive, uncommunicative, and non-consultative. The findings vindicate local developer Andrew Marquess and put a huge public works project in limbo. 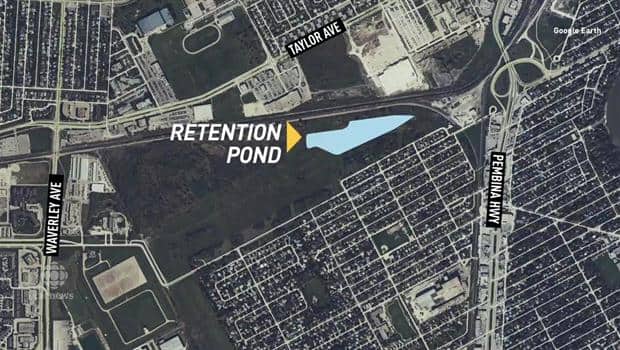 5 years ago
1:53
A report on expropriating some land to build a retention pond slams the city for being secretive, uncommunicative, and non-consultative. The findings vindicate local developer Andrew Marquess and put a huge public works project in limbo. 1:53

A report on expropriating some land to build a retention pond slams the city for being secretive, uncommunicative, and non-consultative. The findings vindicate local developer Andrew Marquess and put a huge public works project in limbo.

The pond is supposed to be built on what's called the Parker Lands in Fort Garry in order to mitigate basement flooding in the area and sewage overflow into the river. The current version of the Cockburn-Calrossie combined sewer area drainage project was chosen because the pipes needed to move water were smaller and cheaper, there would be less disruption to traffic during construction and it required a single drainage pond.

Another version of the plan required two ponds but the city determined that was more expensive to build.

The sewer/drainage project has been rolled into plans for phase two of the rapid transit link to the University of Manitoba and represents one of the largest public works efforts ever planned by the City of Winnipeg.

In order to build the retention pond the city needed 8.3 hectares of land owned by Marquess. However, the developer had plans for a housing complex on the property and declined the city's offer to purchase the land.

The city then initiated expropriation proceedings, leading to a series of hearings in September and October. Those ended with a damning report released Monday challenging the city's handling of the project.

Expropriation Inquiry Officer George Ulyatt's report says the city kept Marquess in the dark about its plans to build the retention pond on his property.

"The City failed to consult with the Parker Land Owner [Marquess], and it could be fairly argued that there appeared to
be a conscious effort on the part of the City to keep the Objector [Marquess' numbered company and Nationals Financial GP Corporation] unaware of the plans of placing a single pond on the property," the report says.

It goes on to say the city virtually hid its decision from Marquess.

"In the present circumstances, the evidence demonstrated a course of conduct contrary to the City objectives of fairness,openness and consultation. In fact, the evidence demonstrated that the City was, at least to this Inquiry Officer, secretive, uncommunicative, and non-consultative, to the extent that the Objector only found out about the placement of the pond on his property by accident."

The report names then-acting chief operating officer Deepak Joshi, saying he met with Marquess in January 2014 and told him that there was no final decision on the pond design. Ulyatt says in the report that "was not true."

The report also criticizes the city for consulting with other developers in the area but not Marquess.

City chief administrative officer Doug McNeil said he has ordered the public service to draft a report on what to do next.

McNeil wasn't sure what the implications of choosing any of the options would be, saying those would be determined by staff looking at what to do next. Their findings would go to city council for approval.

When asked about the frank language describing the city as "secretive, uncommunicative, and non-consultative," McNeil did say there was 'no evidence of wrongdoing in this case,' but if the allegations were true, he didn't want to see the city repeat them. He said it didn't fit with the city's current efforts to be open and transparent with all citizens.

"Certainly it's concerning. It concerns me to the point where - if the allegations or comments are true - I don't want to see us repeat those. I want us to be more positive going forward, be more open and transparent," he said.

However the city chooses to react to Ulyatt's report, time is ticking. The Cockburn Calrossie drainage project is tied to the rapid transit expansion plan and McNeil said "there are fairly tight timelines to get this project through."