Dream vacations worth thousands of dollars have been washed away with the rail bed now that the rail lines to Churchill have been shut down from flooding.

'For us, it was really the adventure of going up there by train,' says woman who planned rail trip with family

It was supposed to be a dream trip to celebrate Canada's 150th birthday, but thanks to the shutdown of rail service to Churchill, that dream has been washed away along with the rail bed for one Winnipeg family.

Angela Heck, her husband and their two children, ages 12 and 10, were looking forward to a special adventure, taking the train to be in the northern Manitoba town for Canada Day.

"It was going to be the start of our big Canada 150 adventure," Heck said.

But it was announced last week that the train service to the community will be shut down until at least winter.

"When I phoned [Via Rail] to find out what the situation was with rail, they said, 'Oh I think it's going to be open again at the end of June,'" Heck said.

She said taking the plane wasn't an option for the family.

"We've been to Churchill before and really love it. But for us, it was really the adventure of going up there by train, taking the days, hanging out as a family. So that was really a critical piece for us to go up there," Heck said.

Heck said on their last rail trip, they became good friends with people from Australia and still keep in touch.

"It's 13 hours with the same people. You can develop some friendships and they were all excited for us to go," Heck said.

"They're all kind of disappointed that we couldn't go and they could travel vicariously with us on Facebook," she added.

"It's a devastating blow to Churchill, no doubt."

Shannon Sampert was looking forward to what may be a last big trip with her 89-year-old father.

The two were booked through Rail Travel Tours to see Churchill and the beluga whales this summer.

Since the track closure was announced, Sampert has emailed the tour operator several times and said she's received no reply.

When she tried calling, the tour operator's voice mail was full.

The CBC spoke to Rail Travel Tours operator Daryl Adair, who said he will be contacting his clients on the Churchill tour and offering to rebook them by air or provide a refund.

But for Sampert, like Heck, the chance to see an unfamiliar part of the country by rail was part of the appeal.

Once she does hear from Adair, she said she would likely take the refund over flying.

Heck hopes she can book next year if the rail line is repaired.

"I feel really for the folks who are in the tourism industry up there. We would have stayed up there, eaten up there. Going beluga whale watching was really going to be the highlight," Heck said. 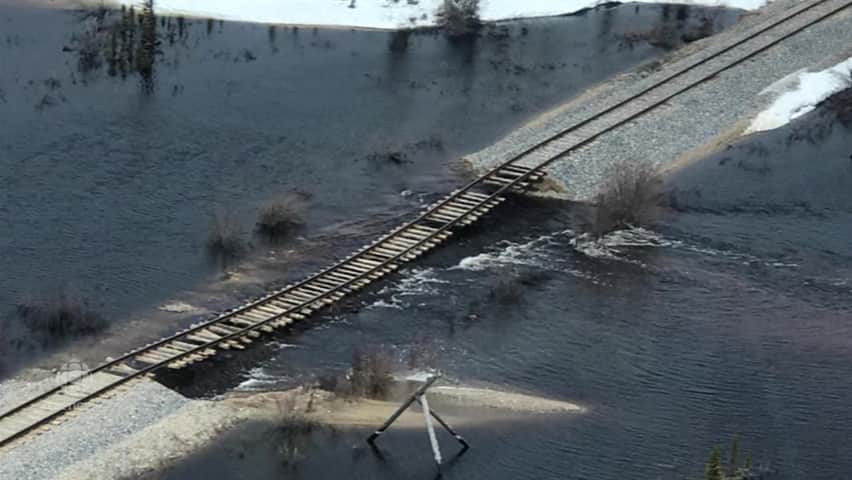 4 years ago
1:31
The president of Omnitrax Canada says the company does not have the resources to fix the Hudson Bay Railway on its own. 1:31
CBC's Journalistic Standards and Practices|About CBC News