'Everybody is just sad right now': Morale in Churchill sinks as deal to buy rail line appears to flounder

The range of emotion in Churchill goes from shock that a purchase deal for the rail line to the northern Manitoba community appears to be in jeopardy to frustration at being unable to do anything about it.

'We really thought everything was going to work out and everything just fell backwards, and it hurt so bad'

The range of emotion in Churchill goes from shock that a purchase deal for the rail line to the northern Manitoba community appears to be in jeopardy to frustration at being unable to do anything about it.

On Tuesday, a spokesperson for Omnitrax Rail — which owns the rail line to Churchill, washed out by flooding in May 2017 — released a statement casting serious doubts on efforts by a group made up of Manitoba communities and a Toronto financial firm to buy the rail line and port in the town, 1,000 kilometres north of Winnipeg.

"Despite our best efforts to find common ground on certain key issues, it now appears that this transaction has fallen apart and that a sale of the [Hudson Bay Railway line] to this group may not be possible," said a news release from Omnitrax, which currently owns the rail and port. 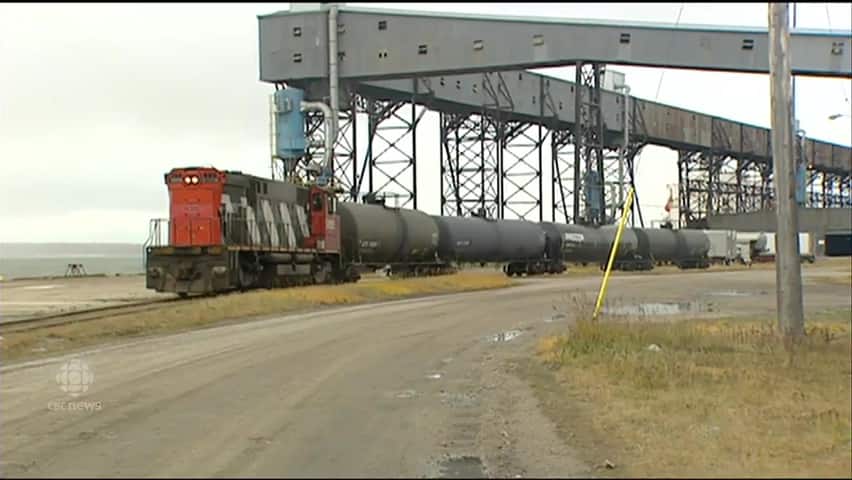 3 years ago
2:06
The range of emotion in Churchill goes from shock that a purchase deal for the rail line to the northern Manitoba community appears to be in jeopardy to frustration at being unable to do anything about it. 2:06

Rhoda de Meulles, who owns and operates the Home Hardware store in the Hudson Bay town, says the news dashed hopes and is making her feel cornered.

"When I heard what happened I got very angry. I felt like I was in a cage [and] I couldn't get out of the cage," she said.

"I was very scared, very upset, because we really thought everything was going to work out and everything just fell backwards, and it hurt so bad."

A tentative deal, announced in late May, was in the works with a consortium that includes two groups representing northern communities and First Nations — One North and Missinippi Rail LP, operating together as Missinippi Rail Partners — along with Fairfax Financial Holdings and AGT Food and Ingredients.

De Meulles was counting on the rail line getting repaired this summer. Now she must decide in the next 10 days whether to order new stock by sea delivery, or risk holding off and hope a deal is made to get repair crews on the rail line soon.

The cost of everything, from food to fuel, has risen dramatically over the last year in Churchill.

If the rail line isn't repaired, the cost for a sheet of plywood de Meulles sells in her store will go up 60 cents a pound to have it delivered by ship.

The store owner has lived in Churchill for 38 years and her husband was born and raised in the town. She says the community is reaching a breaking point.

"It's ridiculous. I don't know why we haven't expropriated this line from Omnitrax already," Daley said.

"They are not living up to their commitment to Canada and to the Manitoba people. This line is supposed to be repaired."

In June, the Canadian Transportation Agency ordered Omnitrax to begin repairs on the Hudson Bay Railway by July 3 and file monthly progress reports beginning in August until the work is complete.

The company has said it plans to appeal that order.

Niki Ashton, the MP for Churchill-Keewatinook Aski, says Ottawa hasn't done enough to conclude a deal for the sale of the port and rail line and fired a shot at Prime Minister Justin Trudeau.

"Why is our prime minister spending so much time travelling the world when we here in Canada are hurting so badly, when we know the issues we are facing are of national importance — the only deep water arctic seaport shut down," Ashton said to reporters at a press conference outside Union Station in Winnipeg Wednesday.

Ashton called Omnitrax owner Pat Broe a "wannabe Donald Trump" who has shown "not just disrespect but disdain for Churchill."

The NDP MP also fired a shot at Premier Brian Pallister, saying Manitoba's Progressive Conservative government has been absent from efforts to reopen the rail line.

The Province of Manitoba says a much-need shipment of propane will arrive in Churchill in "the next couple of days."

The town issued an emergency order last week asking residents to ration the gas, based on an evaluation of fuel levels from Manitoba's Emergency Measures Organization.

If work to repair the rail line is further delayed, officials will have to begin considering another shipment of propane to last the community through the winter.

A sea delivery is exponentially more expensive than shipping the fuel by rail.