Officials with OmniTrax Canada failed to show up for a planned meeting with the union representing laid-off workers at the Port of Churchill.

Officials with OmniTrax Canada failed to show up for a planned meeting with the union representing laid-off workers at the Port of Churchill.

The meeting was set to happen Wednesday morning at OmniTrax's downtown Winnipeg office — after the company cancelled an earlier meeting that was supposed to take place in Churchill in the summer.

Marianne Hladun, Prairies spokeswoman for the Public Service Alliance of Canada, said a union bargaining group paid for three members to fly into Winnipeg from Churchill for Wednesday's meeting.

Instead, OmniTrax's chief operating officer sent a text saying he had an emergency and asking to meet by phone, Hladun said.

It would have been the first meeting between the two sides since the Denver-headquartered company laid the workers off in July. The port is the biggest employer in Churchill.

Hladun said the union will do the meeting by phone, but things haven't started on a good tone.

"This is not respectful to the bargaining process," she said. "They could have told us he wouldn't be at the meeting."

Although the workers have been laid off, the company is still required to negotiate a new contract as the old one is expiring.

Hladun was also hoping to find out why the company didn't let the union know about the layoffs ahead of time.

A number of the workers and supporters of the Port of Churchill rallied on the sidewalk in front of OmniTrax's Lombard Avenue office on Wednesday, carrying signs and waving flags. Several other unions joined them in a show of solidarity, including the Manitoba Government and General Employees Union, the Union of Canadian Transportation Employees, Unifor and other Public Service Alliance of Canada members.

OmniTrax has operated the port and the Hudson Bay rail line since 1997, but a slump in grain shipments has put a strain on the operation.

On Tuesday this week, the Union of Canadian Transportation Employees called on the Canadian government and Transport Minister Marc Garneau to convert the port — Canada's only deep water port — into a federally regulated port authority.

That could create a modern and viable facility that could focus on more than just shipping grain, the union suggested.

Tourism in the form of luxury cruise ships is moving into the Arctic, and the port could also be the perfect location for the Canadian Coast Guard and the Canadian Navy as they address issues of sovereignty and safety in the north, the UCTE said. 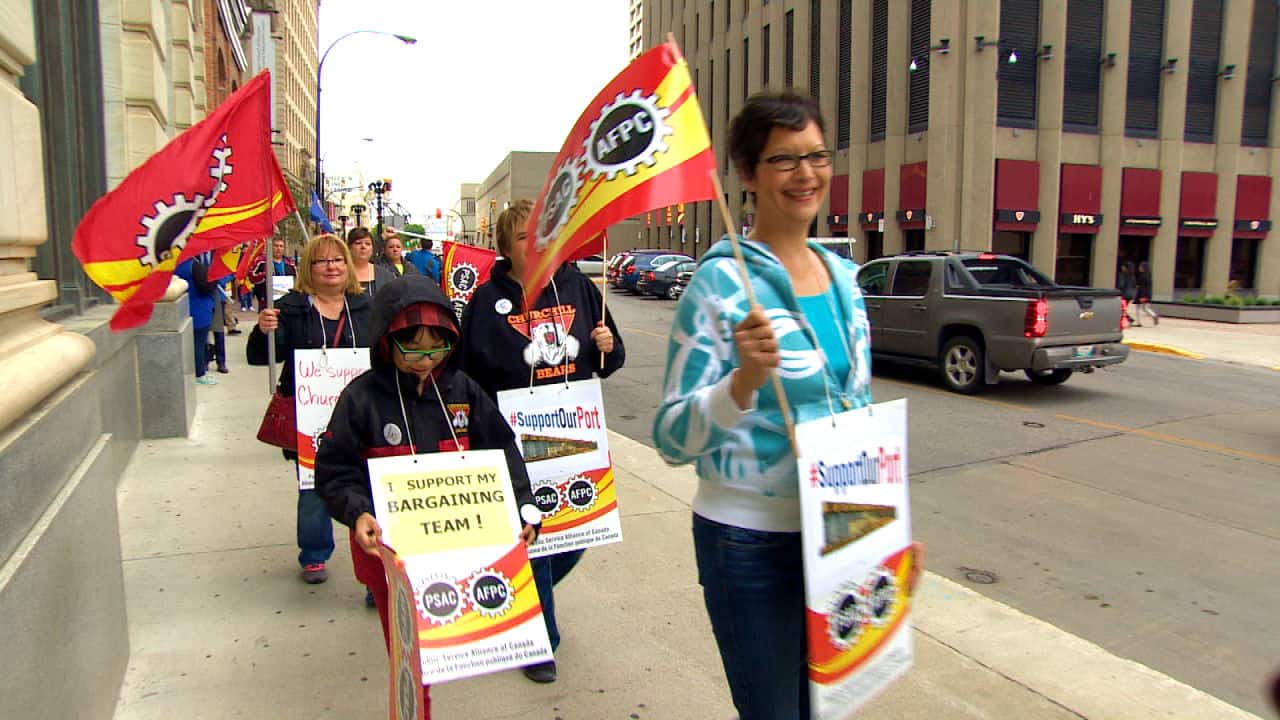 Port of Churchill supporters march in front of the OmniTrax office

4 years agoVideo
1:21
Officials with OmniTrax Canada failed to show up for a planned meeting with the union representing laid-off workers at the Port of Churchill. 1:21
CBC's Journalistic Standards and Practices|About CBC News