Two motorcycle riders from Colorado surprised locals in Churchill by riding along the rail line to the northern Manitoba town — a route they thought was flooded. The riders say the tracks aren't in bad shape.

Since the late '70s, Steve Green has been taking long long rides on his motorcycle throughout South America, Canada and the United States. But one journey has been on the Colorado resident's radar for years.

"I always wanted to do Churchill. I love maps. I love poring over maps and that was one place that enticed me," Green says on his mobile phone from Gillam, Man. — about 275 kilometres south of the northern Manitoba town of Churchill.

Green says in 2004 he posted a query online: "Has anybody ever been to Churchill?"

No one responded, he says.

So Green posted a call-out for a travel partner on a website for Colorado motorcycle enthusiasts and Richard Whittaker, with whom Green had ridden many times, was the only one to respond.

The epic six-day journey the two Americans would eventually take saw them ride along the flood-damaged rail line to Hudson Bay and record the condition of the tracks along the way.

"We left Denver on the ninth [of June] and got to Churchill on the 14th," Green said.

During a stop in The Pas, a restaurant manager showed the two men a news story about the rail line being flooded.

"We didn't know that until then. Richard and I were, like, 'Oh boy, what do we do?' So we thought, let's go up the flooded track at least as far as we can and see what we can see," Green recalled.

It was late in the afternoon when the two riders got on the tracks near Sundance and began pushing into the unknown.

As the two men got further down the tracks, Green said he was keenly aware of the significance of where they were travelling.

"As we were going north I recognized the fact that probably nobody's been up here, because everybody was saying, 'You can't get through,' and I started thinking about taking photos. So we took photos of all the washouts that appeared to be big enough to wanna take a photo of," Green said.

He said he and Whittaker recorded 14 washouts on the route from Gillam to Churchill. When the two men arrived in Churchill, he emailed the photos to an address on the town's website.

Soon after, he and Whittaker were in Churchill's town office meeting with Mayor Mike Spence. Word spread fast around town of the pair's adventure, and soon they had a call from Via Rail staff asking to meet.

The Via employees were eager for information about the condition of the track. A company locomotive and cars are stranded in Churchill and Via pays Denver-based track owner Omnitrax for the right to run on the line.

"They wanted to see what we had … and they thought it was fantastic they got better information. Because Omnitrax, who they rent the track from, had been giving them information that didn't seem to jive with the information we had. Omnitrax was saying it was a lot worse — from my understanding — and our information was, it's not as bad. It's fixable," Green said.

"The photos [from Green] are surprising and they are encouraging," Churchill Mayor Mike Spence wrote to CBC News.

"There is no water covering the tracks in any place and reports are that there has not been for some time now. It has been almost three weeks now. Certainly there is some damage but the photos and reports provided speak to the need to have workers on the ground beginning repairs now."

Green said his initial assessment of the track was "it sucks," but as he completed the journey he changed his mind. The washouts were significant but repairable to his eye.

"You know, this track can be fixed," Green said.

"You couldn't make it beautiful high-speed track; it's never going to be that. But the washouts — you fix 'em, it's going to be the same track it used to be."

Green said the general condition of the line overall didn't seem to be very good. Many of the rail ties were old and worn and he said there didn't appear to be the appropriate number of culverts in place under the tracks in some locations.

Green admits he's not an engineer (he is a lapidary — a gem cutter and polisher), but said he's no stranger to construction work and thinks the task to repair the line just doesn't seem daunting.

"The tracks are fine. The two metal rails are fine. Where it's washed out, they sag." Green estimated the largest washout to be 120 feet, or 36.5 metres, long and four feet (just over a metre) deep.

Rail line owner Omnitrax said on June 15 the damage assessment could take a month and repairs upwards of a year.

​The provincial and federal governments are working on several strategies for assistance for the isolated town, but have yet to weigh in on how to repair the line more rapidly.

Green said the two men were treated amazingly well by the locals in Churchill and they were literally given tours of everything. They were also part of a community barbecue on June 18.

"We got to visit with everybody," he said.

Green thinks residents feel abandoned by government and not in the loop for information. The arrival of the riders, and the news the track was no longer under water, was a shot of hope — and anger.

"Then they started realizing that someone was dragging their feet, and why doesn't people just get their act together and get going?"

He said if he lived there, he would feel the same anxiety the Churchill residents are feeling.

"If the track is not getting fixed and the town depends on it, you got an issue there.… That train is like a lifeline. It would be like cutting off your telephone or cutting off your water," Green said.

The Colorado motorcycle rider said he understands the economic, strategic and political issues are complicated but after riding the rail line and meeting the locals in Churchill, he's come away with a simple observation.

"I'm a kind of guy … I look at a problem, I say, 'Fix it, do it now!' Easy. I just grab a shovel and do it myself if I can't get anybody to do it. But I was surprised. Everybody is talking about it [Churchill], nobody's doing nothing."

CBC News asked Omnitrax for an update on their inspection process, what they've discovered so far and any new information on a timeline for repairs. The company was also asked to comment on the eye-witness description of the condition of the rail line.

The company has not responded to the request.

Transport Canada, which does not carry out independent assessments of "inactive" rail lines, says Omnitrax has hired a third-party engineer to assess the condition of the track.

"We await the third-party engineering assessment of the rail line to determine next steps as they relate to community resupply. Also, before resuming operations, the railway must inspect the line. Any questions about repairs and associated inspections should be directed to Omnitrax," said Natasha Gauthier, media relations advisor for Transport Canada, in an email.

"Transport Canada will continue to provide regulatory assistance to support increased air and marine traffic," she wrote. "As the owner and operator of the Churchill Airport, Transport Canada is confident the airport has the capacity to accommodate increased cargo operations if necessary."

Gauthier added that since Omnitrax also owns and operates the Port of Churchill, only it can answer questions about the port's capacity, as well. 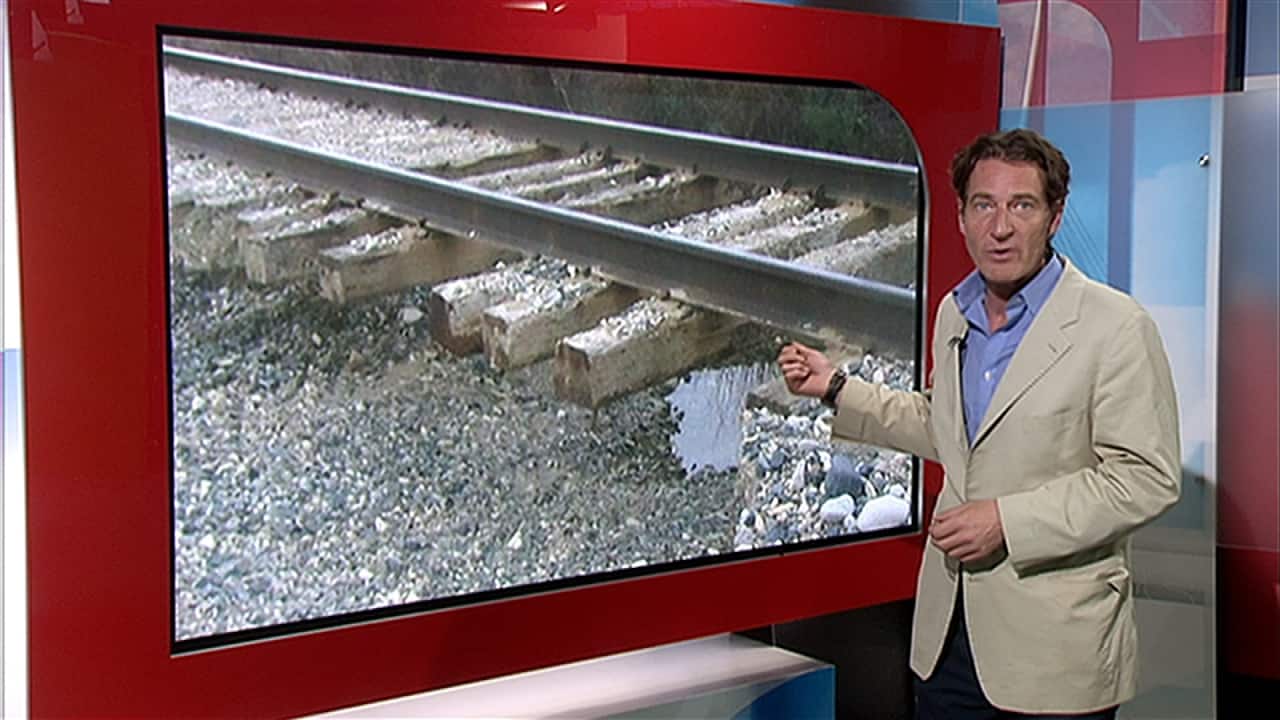 How badly damaged is the train track to Churchill

4 years ago
2:37
Questions tonight about how badly damaged the train track to Churchill really is. They come after two motorcyclists from Colorado rode along the tracks, making a the first overland journey to the northern town since the rail line flooded in late May. Steve Green and Richard Whittaker say the tracks are dry and look repairable. CBC's Sean Kavanagh spoke to Steve Green as the two men were making their way back to Denver. 2:37