Christine Wood's parents were the first to take the stand in the trial of the man accused of her 2016 killing, which began Tuesday morning.

Christine Wood met the man charged with murdering her through the online dating site Plenty of Fish, a jury heard in a Winnipeg courtroom on the opening day of testimony in the trial of Brett Overby.

Wood's parents were the first to take the stand at the trial for the 2016 killing, which got underway Tuesday morning.

Her body wasn't discovered until June 2017 in a farmer's field in the rural municipality of Springfield, just east of Winnipeg.

Justice Chris Martin is presiding over the trial, which is expected to continue until May 17.

In her opening statement, Crown prosecutor Chantal Boutin told the jury of three women and nine men at the Court of Queen's Bench that in the coming weeks they will hear evidence that Wood and Overby met on the dating site and had arranged to meet the night she disappeared.

Boutin said the evidence will show that Wood's last known communications were made via Overby's Wi-Fi connection at his home at 341 Burrows Ave. in Winnipeg.

The Crown alleges she didn't leave his home alive. Boutin said the evidence will show that she died there after suffering "blunt and sharp force injuries."

Overby is also believed to have tried to cover up the crime, Boutin said.

The jury watched video of Overby's police interview from January 2017, months before his arrest, in which he denied knowing Wood. In the video, police show him pictures of Wood. 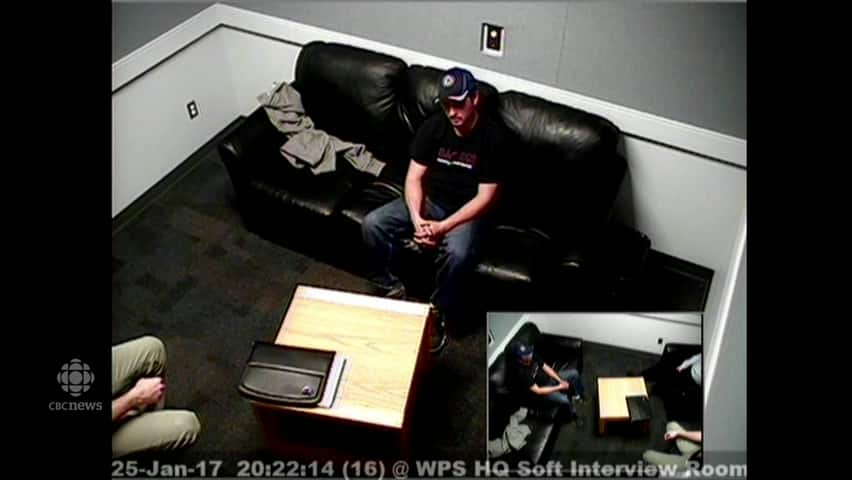 'I don't even know who she is'

1 year ago
0:17
Police question Brett Overby about the death of Christine Wood. 0:17

"I don't recognize her," he told the officers. "This is the first time I've heard the name."

They questioned Overby about people he had dated and where he met them, and whether he ever had people over to his house for parties.

Police also asked Overby about who had access to his Wi-Fi password, which Overby said he gave out to people who came over to his home, including his neighbours.

He said his password had never been changed and that it was possible his neighbours could have continued using it.

When police told him that the last Facebook messages Christine Wood sent came from his IP address, he replied "that's weird."

"OK, well, I understand why I'm here," he said, followed by a laugh.

Near the end of the interview, police asked Overby if he killed Christine. "No," he said.

They asked if he would take a lie detector in the future and he said he would.

"I'm trying to be as helpful as possible," he said. "This is very strange."

Wood's mother, Melinda, was the first to take the stand on Tuesday.  She gave the court details about her daughter's time in school prior to her disappearance.

She said her daughter spent nearly 2½ years living in Winnipeg while studying business administration at the University of Winnipeg. She had moved home to Oxford House for a month in 2016 and returned to the city on July 30.

Melinda and her husband, George Wood, would later come to Winnipeg to accompany a family member for a medical appointment, and their daughter joined them at the hotel the weekend she disappeared.

She told the court they spent the day shopping and described the clothing her daughter bought that day, and which Christine was wearing when Melinda last saw her: a green bandeau top, dark denim shorts and a navy lace shirt over top.

Melinda also described the white purse her daughter had with her that evening. She said she had looked inside it at one point and that it contained make-up.

Melinda had given her cellphone to her daughter to use that day because hers was broken. Later, Melinda found a seflie Christine had taken with it before going out that night. It would later be given to police.

Overby's lawyer, Sarah Inness, asked Melinda whether she had been concerned for her daughter while she was living in the city. Melinda said yes.

"Everybody would be concerned," Melinda said. "Things happen in the city."

Court also heard from Wood's father, George. He said she was closest to her mother.

"She confided in her mom the most," he said, when asked about his daughter's relationship with her parents.

Inness asked Melinda whether she knew where her daughter was staying after being evicted from her apartment, and then later being asked to leave the home of a family friend where she had been staying.

Melinda said her daughter told her she was staying with a friend.

Inness also asked Melinda whether her daughter did drugs or partied. Melinda replied she never saw her daughter doing drugs other than an incident in junior high.

Melinda said her daughter drank alcohol "sometimes," and became upset on one occasion in which the RCMP were called in Oxford House.

The defence also asked about Christine's boyfriend, David, and established the parents met with him after Christine disappeared.

Winnipeg Police Service Det. Jean-Guy Roy, who worked on the case, told the court Tuesday afternoon that police interviewed over 100 people during their investigation.

Investigators were also able to determine the IP address from which the messages were sent, Roy said, which is what led them to Overby's Burrows Avenue home.

The officer testified that until that point, Overby's name had not come up in the investigation.