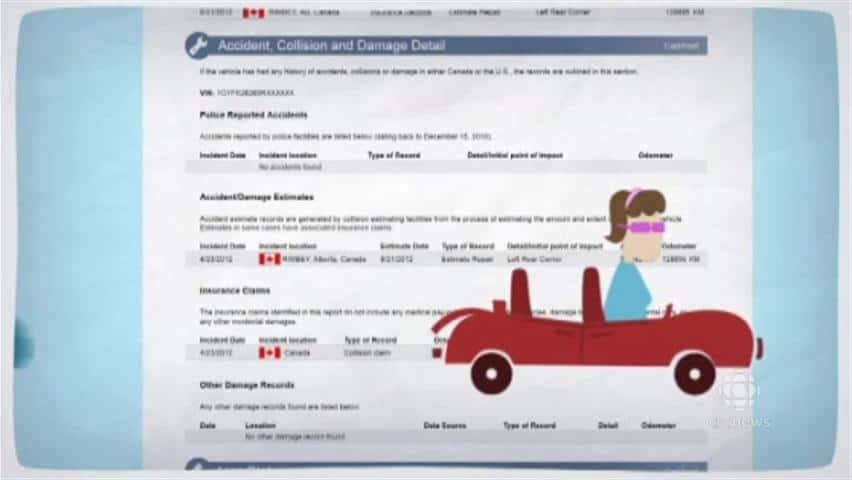 The I-Team ran the vehicle identification numbers (VINs) of used cars and light trucks currently for sale at dealers across Canada through the CarFax website, and compared the results with CarProof reports for the same vehicles.

U.S.-based CarFax and CarProof of London, Ont., are companies that provide reports to consumers and businesses on used vehicles in Canada and the United States. Users enter the VINs of their vehicle into the websites and, for a cost, both companies issue reports on collisions as well as the number of owners and data related to floods, fires and liens.

​In the I-Team investigation, reports for cars from Manitoba, Ontario, Quebec and the United States came back with matching information, but reports for vehicles originating in Saskatchewan, Alberta and British Columbia showed variations in data.

A vehicle from Saskatchewan, a Dodge Caravan, had a clean CarFax report, while CarProof revealed $17,179 worth of collision damage.

In Alberta, a Buick Allure CXL had a CarProof report showing $940.44 in damage, but CarFax showed no collisions.

A customer of a Winnipeg used car dealership got a shock when the CarFax report he depended on to purchase a vehicle at The Car Store on Main Street missed almost $20,000 worth of damage.

Trevor Levasseur bought a 2008 Volkswagen Jetta in February last year, signing a financing agreement totalling $14,000 with 29.9 per cent interest for six years, after the dealership provided him with a CarFax report that showed no damage to the vehicle.

But six months later, when Levasseur decided to sell the Jetta, he discovered the damage on a CarProof report.

The report showed there were two collisions within the last four years in Saskatchewan, where the car originated. One accident netted damage of almost $17,000.

Levasseur told CBC News he depended on the report to make an educated decision.

“What made me confident was CarFax that they showed me,” he said.

CarFax spokesman Chris Basso told CBC News the company couldn’t explain why there are discrepancies in the data, but once information is brought to their attention, they add it to their reports.

The I-Team sent the results of its investigation to CarFax, and Basso did not want to comment further.

CarProof's director of product management, Shawn Vording, says each province requires his company to mine the data differently.

Ontario has a system in which auto insurance is provided by private insurers, and companies are required to submit claims to a central database, which CarProof accesses.

Saskatchewan requires an extra step — CarProof doesn’t receive the data directly, but obtains information about insurance claims by mining that data from Saskatchewan General Insurance's website, where that information is publicly available.

In cases where the Saskatchewan data is not on the report, an alert appears on the CarProof report indicating that records have been found in Saskatchewan and it directs customers to the SGI website. Such an alert does not appear on CarFax reports.

That is because the Insurance Corporation of British Columbia (ICBC), the province's public auto insurer, charges CarProof extra for access to its data.

“We know that it offers the best data, and it's the most comprehensive report that's available,” Vording said of CarProof's reports.

“If there are dealers that are choosing not to use our report, they're also choosing then not to have the most comprehensive report."

Most Manitoba dealers use CarProof

However, he added that vehicle history reports are just a first step in the auto buying process.

“If you have an independent mechanic that you can take it to, I think most dealers are fine with that,” he said.

“I think it is good for the dealer and the consumer, so that everyone knows what they are buying."

Both reporting companies agree that the vehicle history report is just one part of closing a deal and that there are no guarantees with either of their services.

“We always recommend anybody buying a car do three things: take it for a test drive, get a CarFax report, and have a mechanic inspect the vehicle before they buy,” said Basso.

He added that these steps are the best way to avoid any hidden problems and get a safe, reliable vehicle.

CarProof’s Vording also has advice for dealers and consumers: “You need to have information from the previous owner,” he said.

“Without a doubt, it is the best practice to visually or physically inspect the vehicle for any prior damage that may have occurred."

For Levasseur, that advice was too little, too late, but he said the experience has taught him valuable lessons about buying a used car.

“You should always take it to a mechanic.” he said.