If you tried to buy edibles as stocking stuffers before the holidays but stores were all out, you're not alone. Several retail cannabis shops in Winnipeg have been in a pattern of selling out and re-stocking ever since edibles became legal Dec. 17.

New demographics — not seasoned users — likely to drive sales of edibles, vapes, drinks and other derivatives

If you tried to buy edibles as stocking stuffers before the holidays but Manitoba stores were all out, you're not alone.

Several retail cannabis shops in Winnipeg have been in a pattern of selling out and re-stocking ever since edibles became legal Dec. 17.

"We have been kind of cyclically selling out of these products," said John Arbuthnot, CEO of Delta 9 cannabis stores, which have several retail outlets in the city. "Anecdotally, I mean, it was a very positive reception."

Staff at Tokyo Smoke and Tweed stores in Osborne Village indicated the same sort of trend in their shops late in December.

"The first shipment sold out within hours," Kelly Olsen, head of merchandising for Canopy Growth Corporation (who owns both Tokyo Smoke and Tweed), said in a statement.

"Overall for the edible category, we are seeing a strong response from our guests, with most products selling out quite quickly once they are received in stores."

But despite high demand locally, experts say it's too soon to predict whether that momentum will continue — and there's skepticism even among analysts and economists over whether market forecasts from last year will hold true.

'I thought that was ridiculous'

Deloitte released a report in June estimating edibles and other alternatives could be worth $2.7 billion annually, on top of the dried cannabis market.

"I thought that was ridiculous," said Chris Damas, president of BCMI Research and editor of the BCMI Cannabis Report, a newsletter for cannabis investors in North America.

"I'm saying it's tens of millions, because there's not enough THC in these things to attract the experienced users."

You can get a chocolate bar for $20 with 100 mg of THC in it on an illicit dispensary, so we still are facing this problem of the grey market.- Chris Damas

Tweed and Tokyo Smoke (both Canopy stores), Delta 9 and other retailers in the province are selling a variety of chocolates and gummies.

They come with differing concentrations of CBD and THC, including with items in 2½, five and 10 milligram portions. A package with, say, 10 mg of THC costs about $10.

There are also vape pens and cartridges on sale now that weren't before, and Arbuthnot estimates the latter are as popular as salted caramel chocolates, raspberry vanilla gummies and other edibles.

"It's the edibles and the vaporizer products," he says, "those two product lines have been about 50/50 in terms of overall revenue."

In the coming months, cannabis-infused drinks, topical agents and other products are going to be available. Those could draw in consumers that aren't interested in toking or vaping and want something more discreet.

In terms of who is driving — and will continue to drive — these new markets, Arbuthnot acknowledges industry expectations have proven wrong before. Pre-legalization in 2018, he said Delta 9 was convinced their core demographic would be men between the ages of 19 and 30.

"What we have seen — and this stays consistent throughout these [new] 2.0 product categories — is that we really can't put a fine point on it," he said. "We are seeing 19 year olds, we're seeing 70 year olds coming into the store."

He and other producers do, however, predict that different kinds of customers with their own wants and needs will buy the new products. They may see "people who realistically wanted nothing to do with smoking but may want to enjoy a cannabis infused club soda."

Damas agrees with that to an extent. It could be that older people or folks who don't have an interest in dry cannabis turn to drinks, infused mints and the like.

"We're interested to find out ... how many new users of cannabis will be generated by these derivatives," he said.

"People that might be a little leery of buying dried weed will say, 'Well you know a mint, two-and-a-half milligrams, let's give it a shot,'" said Damas. "The chardonnay moms or soccer dads."

University of Winnipeg economist Phil Cyrenne said he thinks producers are betting on new demographics to drive the new side of the business, but he isn't sure those people will become loyal customers or whether they'll get wise to the cheaper, albeit illegal, deals on the black market.

"The one thing I think most people underestimate is just because something is illegal doesn't mean that the supply is haphazard," he said.

"In some sense, if these illegal suppliers have been around for a while, they must be doing something fairly good."

Cyrenne feels regulators will have to catch up, or aspects of the budding edible market could have trouble surviving. He called Health Canada "naive" for thinking the presence of a legal market would constrain sales of illegal products.

"Obviously there is a market for people who want to have it in some sense, quality controlled in terms of knowing exactly how much THC is in it, but I guess the great unknown is how big that market is."

Meanwhile Damas says the seasoned edible users who aren't as afraid of buying from an illicit website can get edibles that are way more potent at a fraction of the cost of what's in stores now.

"You can get a chocolate bar for $20 with 100 mg of THC in it on an illicit dispensary, so we still are facing this problem of the grey market."

For now, Arbuthnot (with Delta 9) and Olsen (with Canopy) both say they're working closely with Liquor, Gaming and Cannabis Authority of Manitoba to work out kinks in the supply chain.

"This is very new," Arbuthnot said. "I think we're experiencing a lot of … growing pains that we did out of the gate of legalization of cannabis flower." 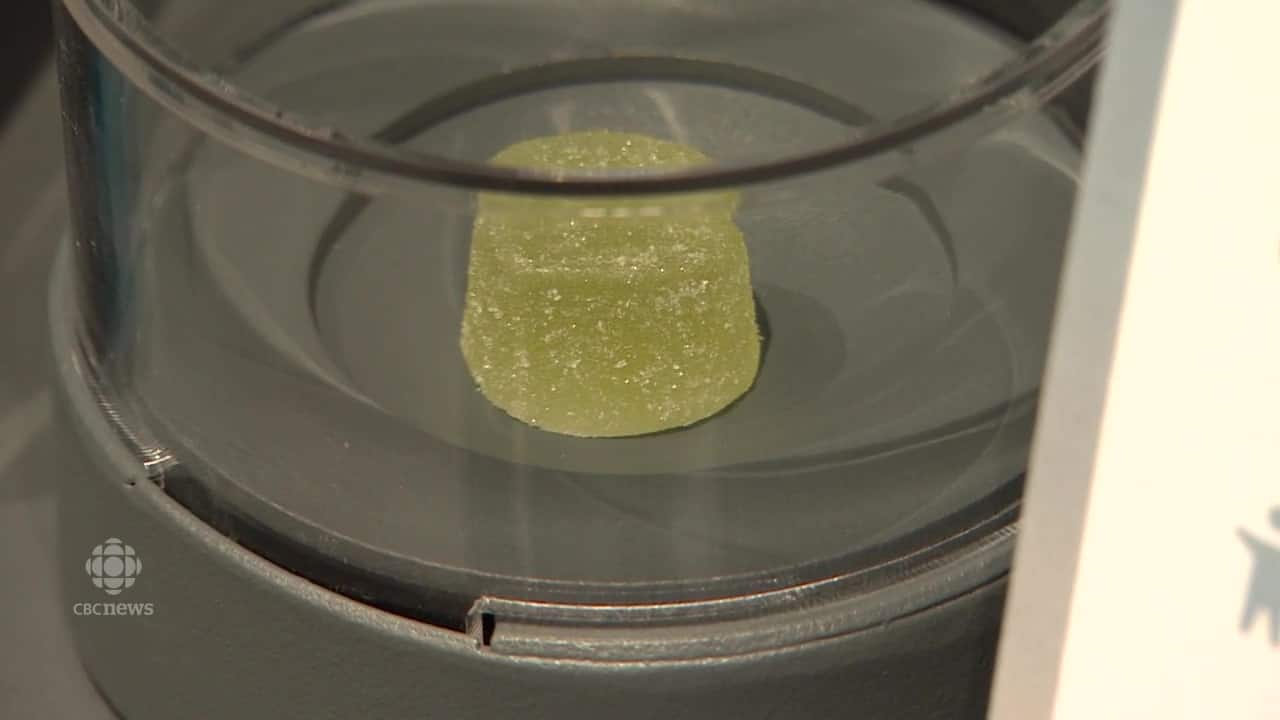 Edibles flying off shelves in Winnipeg

9 months ago
2:17
Edibles are flying off the shelves ever since becoming legal on Dec. 17. Retailers are optimistic about the early interest, but experts say it's too soon to say whether the trend will hold. 2:17