Tempers flared at a federal election forum in downtown Winnipeg on Wednesday night — especially for NDP incumbent Pat Martin, who was heard saying "son of a bitch" while he was grilled by a Green Party candidate. 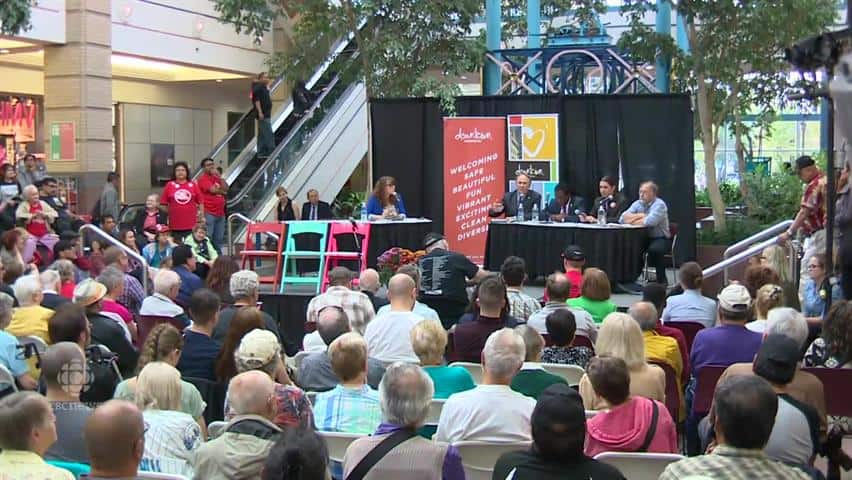 5 years ago
1:52
Tempers flared at a federal election forum in downtown Winnipeg, where NDP incumbent Pat Martin was heard saying "son of a bitch" while being grilled by a Green Party candidate 1:52

Tempers flared at a federal election forum in downtown Winnipeg, where NDP incumbent Pat Martin was heard saying "son of a bitch" while being grilled by a Green Party candidate.

Martin, who has represented Winnipeg Centre for the NDP since 1997, was grilled on his record as MP by Green candidate Don Woodstock at the Downtown Winnipeg BIZ's forum at Portage Place Shopping Centre Wednesday night.

Candidates at the forum, which focused on issues related to the urban core, talked about how their parties would improve infrastructure, fight poverty and crime, help people dealing with addictions and mental illnesses, build more affordable housing and promote human rights.

But the event turned into a heated debate. In addition to questions about his record, Martin was also grilled about whether he currently resides in the riding.

The "son of a bitch" remark came after Woodstock asked Martin how often he helps people with serious mental health issues outside his constituency office in Winnipeg's inner city.

Martin accused Woodstock of insulting his office staff, saying they do help people in need on a regular basis. He could then be seen and heard muttering "you son of a bitch" as Woodstock launched a rebuttal.

Later, Martin could be seen saying "f---ing prick," but the microphones at the debate didn't pick it up.

Now, Woodstock is demanding an apology.

"Pat Martin, the incumbent, elbowed me in the ribs, and called me a f******g p***k! I am not the only one who saw it, we have video evidence, and a young man came up to me after the debate and told us he had seen and heard it, too," Woodstock said in a release.

Woodstock said he has written NDP Leader Thomas Mulcair and is demanding Martin be booted from the party.

Liberal candidate Robert-Falcon Ouellette and Darrell Rankin of Communist Party of Canada also participated in the forum. Conservative candidate Allie Szarkiewicz was invited, but was not present.

"I think the debate was very spirited — I think a little [too] spirited," Ouellette said afterwards.

Meanwhile, after the event ended, a woman wearing a "Vote Green" shirt accused Martin of shoving her — which he said was not true — and not answering her questions. The ensuing argument was captured by news crews that surrounded them. 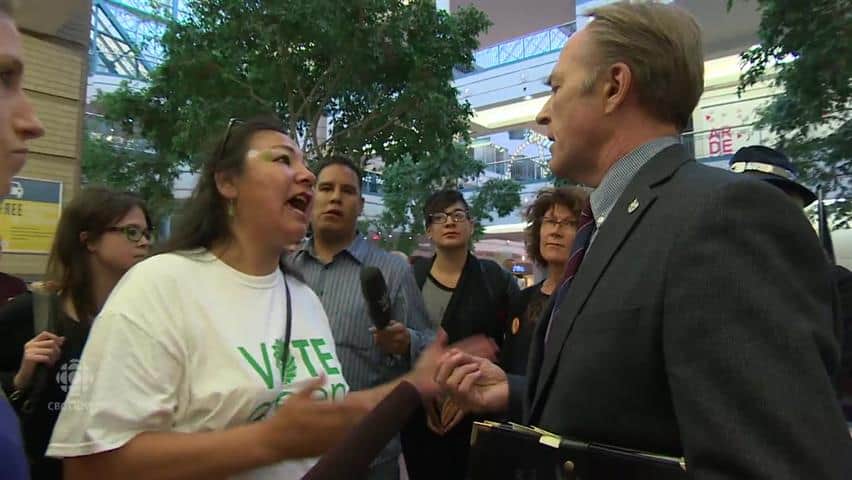 5 years ago
2:12
Winnipeg Centre NDP candidate Pat Martin is confronted by a woman after a federal election debate hosted by the Downtown Winnipeg BIZ. 2:12

'I live in the core area,' says Martin

Several times throughout the debate, Woodstock told the audience he is the only Winnipeg Centre candidate who actually lives in the riding — something that ruffled Martin's feathers.

"I live in the core area, I always have," Martin told reporters afterwards.

The New Democrat also took a shot at Ouellette, whose campaign has targeted Martin for having a home on Salt Spring Island in British Columbia.

Martin noted that Ouellette lives in Winnipeg's South St. Vital neighbourhood — a part of the city that he said "looks like Calgary to me."

"I think it's a bit of a smokescreen diversion on their part to draw attention away from the fact that he has no connection to the inner city whatsoever," Martin added.

Ouellette said while he does not live in Winnipeg Centre, he promises to spend seven days a week working there if he is elected on Oct. 19.

"It's not to say that Pat Martin hasn't done a good job, but I believe there is a time and a place for perhaps a different way of doing politics — a way of perhaps talking and doing the stories in a way which is more authentic," Ouellette said.

Woodstock also said he believes he is a viable alternative to Martin.

"I have done more for this community than he has in 18 years. The problem … is that the media don't think me and my party's sexy enough," Woodstock said.