A waterfall, a butterfly garden and a tropical biome: Diversity Gardens taking shape at Assiniboine Park

The first limbs of Canada's Diversity Gardens, a $75-million gardens and plant conservatory project, are sprouting in a construction site at the southeast corner of Assiniboine Park.

The first limbs of a $75-million gardens and plant conservatory project are sprouting in a construction site at the southeast corner of Assiniboine Park.

Canada's Diversity Gardens is the final of three phases of redevelopment of the park, which began in 2009. The $200-million Assiniboine Park makeover included improvements to the duck pond, the building of the Qualico Centre and the Nature Playground, and the revitalization of the zoo.

It will also involve tearing down the Conservatory, which stood in the park for more than a century and closed at the beginning of April. The gardens are being constructed on the 14-hectare plot occupied by the Conservatory.

"What we're building here is not a replacement, it's going much more beyond what was here before," said Gerald Dieleman, project director for the gardens.

"This is really a key step forward for tourism and travel here in Manitoba. It's a draw, it's an attraction, in a way that the old facility couldn't achieve," he said.

As part of Garden Days, a week-long national celebration of of the vital role of gardens within communities that begins Saturday, media were invited to tour the construction site and get a look at how the project is progressing.

Construction on the new gardens and plant conservatory began last summer after government funding was announced in July. Work on the foundation is complete and the next part of the project will see the structure take shape above ground.

"The milestone this year is to make sure that the skeleton of the building is up," said Dieleman.

"The goal next year is to make sure the roof is on and the mechanical system is up and running, so that when we put the plants in, the systems inside can sustain plant life."

The project is on track to open in the fall of 2020, but the timeline is contingent on meeting seasonal deadlines, like the installation of the roof next summer, which must be done in warm weather, and planting the following summer.

The gardens will be made up of four distinct features.

The main structure, called The Leaf, will take visitors through different climates, with tropical and Mediterranean biomes and a butterfly garden. It will also house a restaurant and banquet facility.

The roof of The Leaf will be made of an extremely lightweight see-through plastic, allowing the structure to be an open space without the use of heavy beams and walls and letting in natural light.

The space, which will be five times larger and twice as tall as the old Conservatory, will do more than just house plants.

The various displays are meant to be educational and reflect human diversity as well as plant diversity.

"What we're trying to do here … is to establish that connection between people and plants," said Dieleman, with garden exhibits that will explore the role plants play in shaping communities.

"One thing that we all have in common is a relationship between ourselves and plants, no matter who you are or where you come from."

Take a look at the future of Canada's Diversity Gardens: 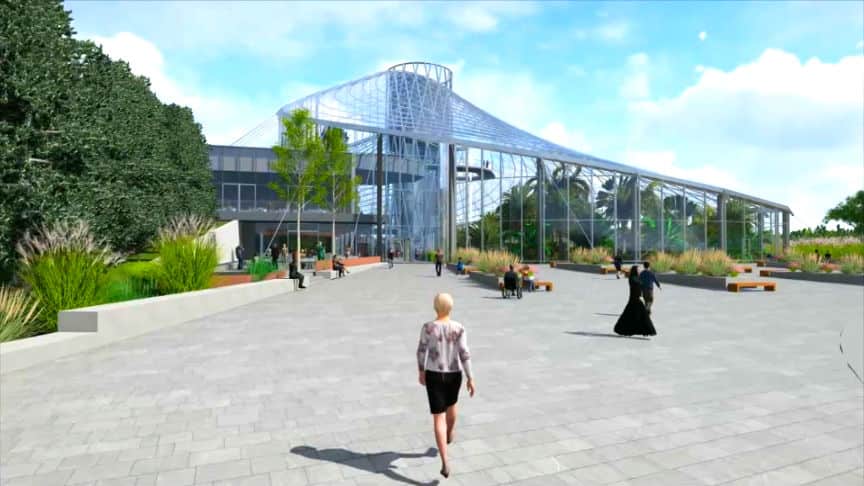 2 years ago
1:36
The first limbs of a $75-million gardens and plant conservatory project are sprouting in a construction site at the southeast corner of Assiniboine Park. 1:36

The tropical biome will feature a six-storey free-flowing waterfall and pond, as well as a canopy walkway to give guest a bird's-eye view of the space.

The three outdoor spaces will consist of The Grove, a showcase of different tree species; the Cultural Mosaic Gardens, which will feature an amphitheatre and sensory garden; and the Indigenous Peoples' Garden, which will showcase native plant species and serve as a gathering space.

The Indigenous garden is being designed in consultation with elders and knowledge keepers to reflect Indigenous culture and history.

"The ultimate goal here is to provide a place that people can enjoy and appreciate for generations to come, just as they have before in the park," said Dieleman.

Other areas of the park are still accessible during construction, including the Terry Fox Fitness Trail.