Three men were taken to hospital — one in critical condition — after being stabbed during a gang fight in a Winnipeg restaurant parking lot on Canada Day. 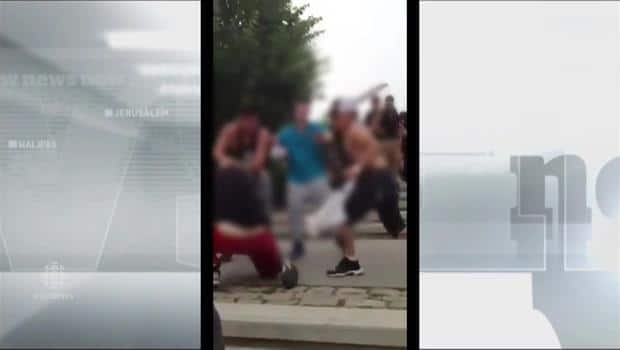 5 years agoVideo
0:26
Two people were fighting at The Forks when a third man jumped into the mix and struck the victim with a machete. 0:26

Three men were taken to hospital — one in critical condition — after being stabbed during a gang fight in a Winnipeg restaurant parking lot on Canada Day.

Nearby, earlier the same evening, a teenage boy was slashed with a machete during a fight at The Forks skateboard park. The boy was taken to hospital in stable condition.

"We're certainly looking into the possibility that it is gang related or gang motivated," said Const. Jason Michalyshen.

It was a busy night for police, with nearly 800 calls for service, said Michalyshen.

1 of 0
The men stabbed during the gang fight were upgraded to stable condition on Thursday, police said, adding that a fourth man was also injured from an assault.

The brawl happened in the parking lot of Earls Restaurant on Main Street, which was surrounded Thursday morning in yellow police tape. Bloodstains on the pavement as well as a switchblade were marked by police evidence tags.

Police said 300 to 400 people were in the fenced-off lot for Canada Day celebrations. The event was billed as the fourth annual Canada Day Block Party, "just steps away" from the main events at The Forks.

Organized Crime unit here to investigate stabbing in Earls on Main Parking lot. 3 stabbed. 1 in critical. <a href="https://twitter.com/hashtag/cbcmb?src=hash">#cbcmb</a> <a href="http://t.co/cxJv4dGsi8">pic.twitter.com/cxJv4dGsi8</a>

The machete attack at The Forks happened at about 8:30 p.m., as thousands of people gathered for Canada Day.

The teen and another male were fighting with a large crowd of people around them when a third man jumped into the mix and slashed one of the males with the machete.

A 20-year-old man has been charged with:

The fight was caught on cellphone video by one of the witnesses and posted to Facebook. Police said the video helped in their investigation.

Forks spokeswoman Chelsea Thomson said close to 100,000 people attended one of the busiest Canada Day events at the site in nearly 20 years.

"For the most part, everything went really well, so it's really unfortunate that this has to scar what would have been an otherwise perfect day," she said.

"We take public safety very seriously here at The Forks every day and even more so on Canada Day. We work very closely with the Winnipeg Police Service."

Thomson said there were 15 times the number of security staff and police at the site on Wednesday as there are on a normal day.

It's the second year in a row that Canada Day was marred by violence in Winnipeg.

Last year, a 28-year-old woman was shot and killed on Donald Street, just off Broadway.

As well, two people were stabbed near the Via Rail station — not far from where Wednesday's incident happened — leaving a 25-year-old man dead and another man in critical condition.

The business association for downtown Winnipeg said despite the violence, the area is safe.

"It seems to be a small little blip that is fuelled by alcohol, humidity and dense crowds," said Downtown Winnipeg BIZ executive director Stefano Grande. "While unfortunate, we feel, overall, the downtown is a great place for festivals and events."

Grande said there are more than 100 events in downtown Winnipeg every year, with more than one million visitors and there is little to no violence.