Manitoba’s small businesses were hoping they may be able to salvage what’s left of the holiday season, but those hopes have been dashed for many.

Manitoba's small businesses were hoping to salvage what's left of the holiday season, but those hopes have now been dashed for many.

The province announced Tuesday that pandemic restrictions prohibiting the sale of non-essential items in store will remain in place until Jan. 8. Those goods can only be purchased for delivery or pickup.

"I was hoping that we'd have some sort of Christmas season or holiday season, that we would be open for at least a small part of December," said Kelsey Steuart, who owns the boutique clothing shop Margot + Maude on Winnipeg's Academy Road.

With the exception of thrift stores, brick-and-mortar retail shops that sell only items deemed non-essential will have to remain closed through the holiday season.

"Usually your holiday sales [in] November-December kind of hold you through January-February, which are really slow months," said Steuart.

She was hoping the province would allow stores like hers to open with strict capacity limits in place, or with appointment-based shopping.

"It was really disappointing — like really, potentially devastating for independent retail as a whole," she said.

The Canadian Federation of Independent Business said it was hoping Manitoba would follow Alberta's lead and allow small retailers to open at 15 per cent capacity, or by appointment.

"For a lot of Manitobans, the news yesterday was probably a gut punch, but for many small businesses that I've talked to over the last few weeks this is going to be close to a death blow probably for some if not many," said Jonathan Alward, the Prairie region director for the CFIB.

"As Jan. 8 approaches, especially if case numbers aren't dropping, I think a lot of business who are already considering bankruptcy are going to make that really unfortunate decision."

Alward said the latest restrictions, which have been in place for close to a month, have already had an extreme impact on small businesses that were still struggling after the first lockdown in the spring.

While aid like the province's $5,000 bridge grant helps, "it doesn't go anywhere near enough to make a lot of these businesses whole," he said.

"It's extremely labour intensive and ultimately, when you are forcing small businesses to close their brick-and-mortar shops and forcing them to go online, they're competing directly with your Amazons."

Steuart has been able to maintain some business through online sales, but overall, her business is down 60 to 70 per cent.

"We have an online store but it isn't the calibre of what an online business would be for a bigger company, or a company that is only online," she said.

She's taking advantage of supports for small businesses like the bridge grant, but worries about what could happen if the shutdown lasts even longer than Jan. 8.

"I'm hoping we can hold on through then, but it's going to be tough," she said.

The Winnipeg Chamber of Commerce was also hoping for some ease on restrictions for small businesses.

"When you look at 2020, many of these businesses have been closed almost half a year, " said Loren Remillard, the chamber's president and CEO.

"If I had to continue to pay all my bills but only had half my income, how would you manage?… And that's what a lot of businesses are facing."

He worries not only about the economic health of small businesses, but the mental health of the people who own them.

Some business owners are seeing their life's work destroyed, and have had to layoff longtime employees who are like family to them, Remillard said.

"The stress level … I've never seen it this high."

Remillard wants to see more planning in place for how businesses will begin to reopen once vaccines begin to roll out.

"As we vaccinate, there needs to be a corresponding economic relief in terms of reopening and confidence building in the business community." 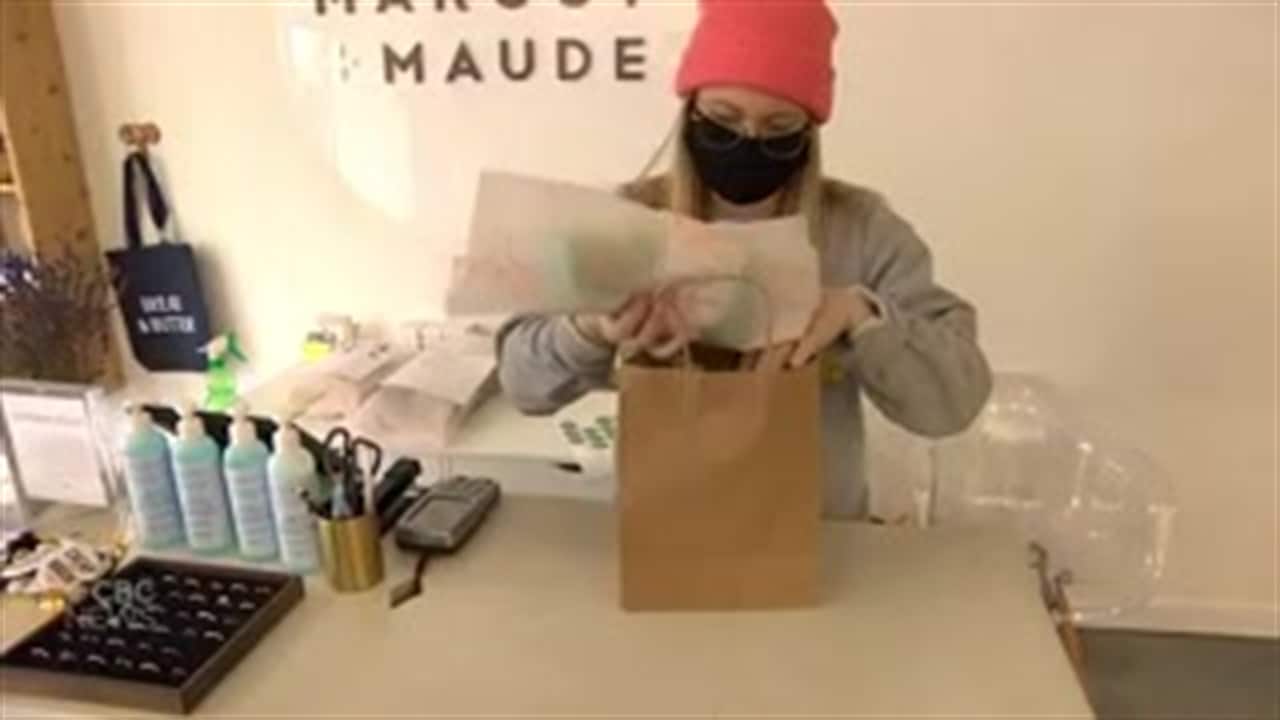 1 month agoVideo
2:11
The province of Manitoba announced Tuesday that pandemic restrictions prohibiting the sale of non-essential items in store will remain in place until Jan. 8. Those goods can only be purchased for delivery or pickup. 2:11
CBC's Journalistic Standards and Practices|About CBC News