Manitoba's medical examiner says the man who died in his wheelchair during a 34-hour wait in a Winnipeg hospital emergency room had been dead for several hours before he was discovered. 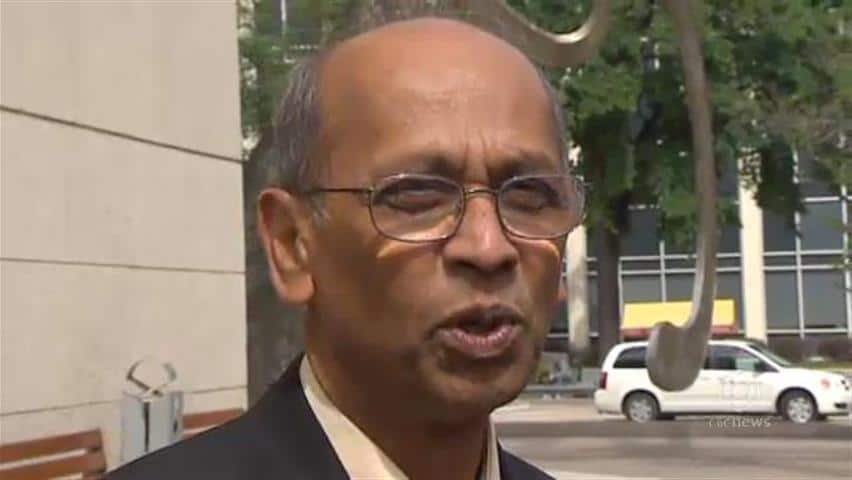 7 years agoVideo
1:33
Manitoba's medical examiner says the man who died in his wheelchair during a 34-hour wait in a Winnipeg hospital emergency room had been dead for several hours before he was discovered. 1:33

Manitoba's medical examiner says the man who died in his wheelchair during a 34-hour wait in a Winnipeg hospital emergency room had been dead for several hours before he was discovered.

Dr. Thambirajah Balachandra on Wednesday told the inquest into Brian Sinclair's death that rigor mortis had begun to set in when the homeless double-amputee was declared dead in September 2008.

The inquest, in its second day, is examining what happened between the time Sinclair went to the Health Sciences Centre (HSC) emergency room in September 2008 and the time someone in the waiting room told a security guard they believed Sinclair was dead.

Check here for updates from the CBC's Ryan Hicks, who is covering the Brian Sinclair inquest.

The 45-year-old double-amputee was awaiting a minor procedure but no one ever came to his assistance, even as he vomited in plain sight.

Balachandra said Wednesday that medical staff should attend to patients who are throwing up.

Staff should have checked on Sinclair as they were coming and going, especially since he was waiting in the same spot for so long, he added.

Sinclair, whose death was later attributed to a treatable bladder infection, died of septic shock.

On Tuesday, Balachandra told the inquest that all Sinclair would have needed was a catheter change and antibiotics.

Dr. John Younes, the pathologist who examined Sinclair's body, testified on Wednesday afternoon that Sinclair had solvent abuse issues, but that wasn't the reason he died.

Younes told the inquest he added a reference to solvent abuse to Sinclair's autopsy report because they played a role in the bladder issues.

The inquest has also heard that HSC staff found a doctor's referral note in Sinclair's pocket after he died, which would indicate he was not properly triaged before being sent to the waiting room.

The WRHA says it has changed its ER triage procedures since then.

Security footage at the HSC shows Sinclair went to the triage desk and spoke to an aide before wheeling himself into the waiting room.

That appeared to have been his only interaction with staff.

Almost a day and a half later, another person in the waiting room finally spoke up about Sinclair. Efforts to revive him were unsuccessful.

Race not a cause, says Balachandra

As the inquest got underway Tuesday in Winnipeg, some family members and others asked if Sinclair may have been treated differently because he was a low-income aboriginal person.

But Balachandra said he believes issues with the triage system played a role in Sinclair's death, not racism.

"Even if Snow White had gone there, she would have got the same treatment under the same circumstances," he said.

The Brian Sinclair inquest is scheduled to run throughout this month, every Monday to Thursday. Additional dates will be scheduled for October and possibly in early 2014.

Police and the Crown attorney's office had investigated Sinclair's death to see if charges of criminal negligence or failing to provide the necessities of life might have applied. However, they decided no charges were warranted.

The Winnipeg Regional Health Authority has paid $110,000 in damages to the Sinclair family for loss of care, guidance and companionship.