Since his election as a Manitoba MLA in September 2012, Brian Pallister has travelled to Costa Rica 15 times, spending 18.2 per cent of his total time in the Central American country. 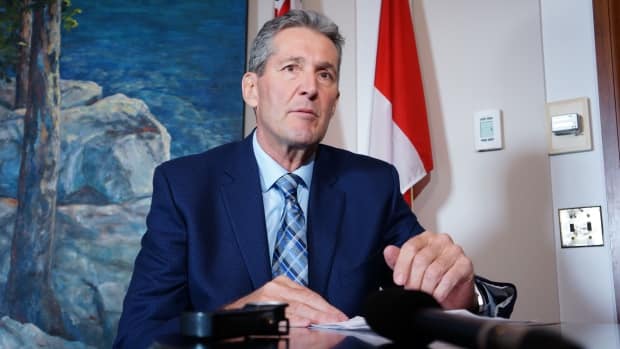 5 years agoVideo
2:13
Since his election as a Manitoba MLA in September 2012, Brian Pallister has travelled to Costa Rica 15 times, spending 18.2 per cent of his total time in the Central American country. 2:13

Since his election as a Manitoba MLA in September 2012, Brian Pallister has travelled to Costa Rica 15 times, spending 18.2 per cent of his total time in the Central American country.

Public records show Pallister spent about 240 days either en route to or in Costa Rica. His latest trip there was from Jan. 31 to Feb. 10 of this year.

NDP Leader Greg Selinger spent an estimated 50 days at the cottage with his family in northwestern Ontario during that same time period, according to party spokesperson Andrew Tod, who added the days away were primarily on weekends.

MLAs are not required to report when they take vacations and have no specific vacation day allotment or sick leave, according to a Manitoba Legislative Assembly spokesperson.

But when the House is sitting, they must report any absences to the Speaker.

None of Pallister's Costa Rica trips occurred when the legislature was sitting.

CBC News asked for public records from Costa Rica after a news conference Monday, where Pallister proactively disclosed he owns a vacation property in Costa Rica and the balance of his bank account in that country was roughly $2,300 Cdn, that morning.

"The account in Costa Rica and the property have always been reported on my tax return, which is confidential," Pallister said to reporters after both Selinger and Bokhari disclosed information from their income tax returns.

Pallister in Costa Rica when Manitoba declares state of emergency

Pallister was away during the height of the 2014 flood.

In early July of that year, the premier declared a state of emergency, and the military was called in to help shore up dikes. Prime Minister Stephen Harper came to tour the disaster zone on July 6.

Later that year, when asked by the Winnipeg Free Press about where he was during the flood, Pallister responded, "I was at a family wedding in Alberta in July; the first week of July was when the unprecedented rainfall occurred one day in parts of western Manitoba."

"During the 2014 flood, Mr. Pallister visited threatened regions throughout south-western Manitoba, meeting with affected Manitobans, community leaders and emergency measures officials as they fought the flood waters. When unprecedented and unpredicted flash flooding occurred in July 2014, Mr. Pallister was already out of the province. While he publicly supported the presence of then-premier Selinger and local officials on the front lines, Mr. Pallister has repeatedly stated that he does not believe times of crises should be politicised," wrote Billson.

"Immediately upon returning to Manitoba, Mr. Pallister once again visited impacted communities, doing so without fanfare or media attention," she added.

The PC Party declined to tell CBC News whether Pallister spent any additional days away, beyond his Costa Rica trips.

In a story on April 2, the Winnipeg Free Press asked the party leaders, "Where did you go the last time you left Canada?"

Pallister replied, "The former site of Jack's Bar in Maida, N.D., ... I used to make at least a semi-annual drive down there. It was the drive as much as the steak at the end. It's one of my major lamentations that it's closed now. [I went] back last fall."

But travel records from Costa Rica show he was in that country for 25 days over this past Christmas and New Year's and another 11 days at the end of January and into February this year.

"This was an oversight, an unfortunate lapse in memory," wrote Billson to explain why Pallister answered Maida, N.D.

Paul Thomas, professor emeritus at the University of Manitoba, said being outside the country a lot doesn't break any rules of the legislature.

He noted there are not many sitting days in the house, but he said the issue could impact Pallister's personal popularity with voters.

"That's a much bigger worry for him, and it goes beyond simply where he chooses to take vacations and how often he goes. It's about appearances and the belief that politicians are paid to be full time, that they're not expected to take extensive periods off from performing in their public roles," said Thomas. "There were events, floods and other things like that where he was not available for comment."

Royce Koop, the head of the political studies at the University of Manitoba, agreed.

"This is a classic issue where there is probably no formal rules, but it is a matter where the voters decide if it is something they actually care about when they decide to vote, " said Koop.

"MLAs, they are big girls and boys," said Todd MacKay, prairie director of the Canadian Taxpayers Federation. "I don't need to make a star chart to track where they are all the time. That said, my boss likes to know where I am. I think for most Manitobans, their bosses like to know where they're at."

The issue of disclosing foreign holdings arose on the weekend when Selinger pointed to the Panama Papers and issues of secret corporations as a reason for politicians to be more transparent.

CBC News, which has access to the Panama Papers database, has confirmed neither Pallister nor Selinger nor Bokhari are named as clients with offshore accounts in the records.