A Winnipeg high school teacher who posted controversial remarks on Facebook about First Nations people is now on paid leave.

WARNING: Contains comments that may be offensive 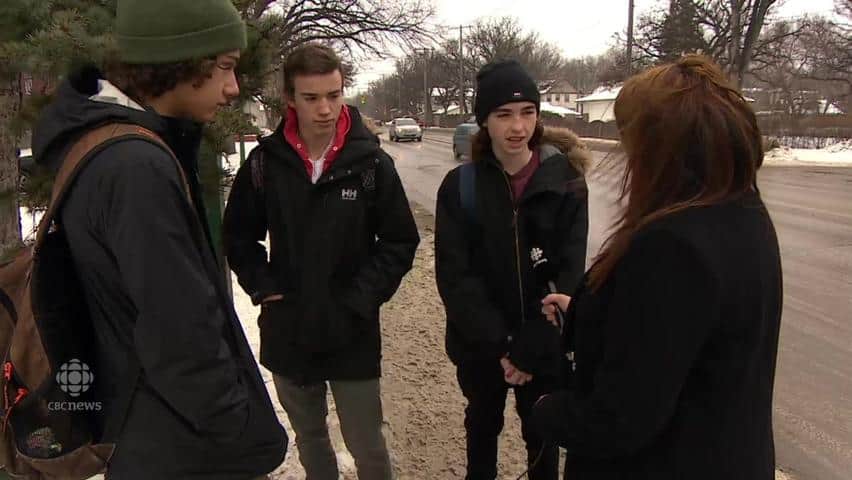 6 years ago
2:04
A Winnipeg high school teacher who posted controversial remarks on Facebook about First Nations people is now on paid administrative leave. 2:04

Some of the comments made by Brad Badiuk, an electronics teacher at Kelvin High School, concern aboriginal people generally. Others targeted Derek Nepinak, the grand chief of the Assembly of Manitoba Chiefs (AMC).

The controversy started when another teacher posted an article on her Facebook page about John Ralston Saul's book, The Comeback, which contends that repairing the relationship between First Nations peoples and the rest of Canada is a pressing issue.

In response, Badiuk put these posts (taken verbatim) on Facebook, "Oh Goddd how long are aboriginal people going to use what happened as a crutch to suck more money out of Canadians?

"The benefits the aboriginals enjoy from the white man/europeans far outweigh any wrong doings that were done to a concured people."

Another line read, "Get to work, tear the treaties and shut the FK up already. My ancestor migrated here early 1900's they didn't do anything. Why am I on the hook for their cultural support?"

In some of his posts, Badiuk took aim at Nepinak.

"He wears feathers on his head and calls himself the Grand Chief. You see he had an idea. Indians have no money. You have money. So he could get his hands on your money, that would solve the problem of indians without money," the comments read.

Kevin Hart, who works with the AMC, complained to the school board about the comments, calling them racist and hurtful, and demanding action be taken.

"It just shows that we have so much more to go, that even a teacher that works in a school division, we [even] have to educate those people," he said. "I think it's worse, especially when we have educators ... leading and teaching the young minds of this country."

​Nepinak was blunt in his response.

"If racists are going to come forward like that and make comments like that, but yet are still tasked with teaching our young people, then we got a responsibility to stand in the way of that."

Nepinak said he believes the relationship between the aboriginal community and others still requires work.

"I come from a humble place, a respectful place to recognize that there's a lot of people suffering from ignorance," he said.

CBC's attempts to reach Badiuk for comment were unsuccessful.

School officials could not say how long the investigation would take or whether Badiuk might face discipline.

"It's obviously really disheartening," said Mark Wasyliw, chair of the board of the Winnipeg School Division.

"We are a very diverse school division. We have a huge population of aboriginal students and these types of allegations are always concerning and demoralizing for staff."

A well-liked teacher or a poor example?

The buzz among students at Kelvin Thursday was all about Badiuk's Facebook comments.

Ryan Smith, a Grade 10 student, said Badiuk should not have made them in a public forum.

"I obviously don't think they're true. And he probably shouldn't put that on social media. Probably not even talk about it at all, because anybody can see it once it's up there. And it can damage your reputation as a teacher, which it might have done."

Simon Jones, who is in the same grade, said Badiuk wasn't setting a very good example.

"Because he's a teacher, he's supposed to have some level of being a better role model and example for students."

Jacob Clendenan, also in Grade 10, had Badiuk as a teacher last year. He said while Badiuik was not his favourite teacher, he was not the worst teacher, either.

"After seeing these comments, it kind of makes me not want to take his class," he said. "He might not be fair to aboriginal people when grades come into factor."

Grade 11 student Kahyman Dejenova, who is in one of Badiuk's classes, said he's not sure if the teacher should be disciplined.

"A lot of people like him. He's just that kind of person who everyone likes because he's smart. And he gets stuff done as well," he said.

No such thing as 'off-duty teacher'

Paul Olson president of the Manitoba Teachers' Society said although there are no formal rules about what teachers can and cannot say on social media sites such as Facebook, they are nevertheless held to higher standards.

"There's no such thing as a teacher off duty," he said. "There's legal precedent in Canada on that. Teaching is not so much something you do as a teacher, it's something you are. You're a teacher 24 hours a day, 365 days a year, anywhere on earth. That can be taken to extremes but if something in your personal or your private conduct causes any concern about your professional practice, that is fair game, at least for a conversation with your employer or your professional organization, depending. So you're never really off duty."

He said while thousands of teachers use social media, cases like this are relatively rare and are dealt with on a case by case basis.

"It's largely a matter between the individual teacher and the employer what discipline would be. [It] depends on the policies of the school. Depends on whether it's a first 'oops' or the third time it had happened in a month. There are a lot of moving pieces on that. It would trigger a conversation between a teacher and a school division. In terms of specific rules on that, they don't exist."