A black bear cub that was found severely wounded lying in a pile of garbage is recovering at the Assiniboine Park Zoo after spending the night in the bed of a nurse who took the animal into her home. 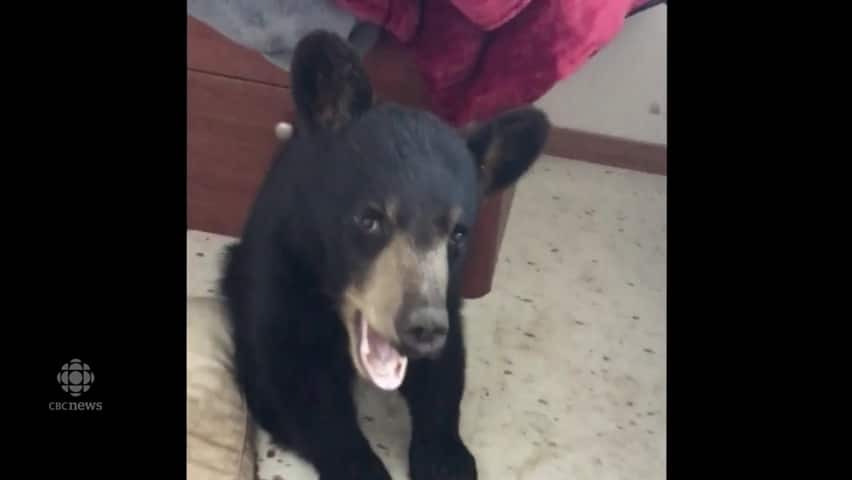 3 years ago
0:19
A black bear cub that was found severely wounded lying in a pile of garbage is recovering at the Assiniboine Park Zoo after spending the night in a nurse’s bed who took the cub into her home. 0:19

A black bear cub found severely wounded and lying in a pile of garbage is recovering at the Assiniboine Park Zoo after spending the night in the bed of a nurse who took the animal into her home.

Kids living on the Bloodvein First Nation found the bear at the community's garbage dump last Wednesday, said Jasmine Colucci, a Bloodvein nurse, who runs an animal rescue in the community.

"It was laying in a pile of garbage, unable to move," she told CBC News. "The kids brought the bear to the community's nursing station and once there, nursing staff started an IV [intravenous fluids] on the animal.

"Then we're like, well, what now? What are we going to do with this thing, even if we put IV fluids on it?" Colucci recalled adding that's when the nurses decided to take the bear to Colucci's house.

She said the cub, weighing about 30 pounds, was badly dehydrated and had large wounds and holes throughout her body. The wounds were so large, she thought, but couldn't confirm, the bear might have been shot.

"If I would've known that she was going to rally like that I would've put her in the spare bedroom. But I, like, just finished washing all my sheets and sanitizing them like 50 times," she said.

"She started clenching her teeth towards me, like she wanted to eat me. It's quite intimidating, actually, especially starting an IV on her. I couldn't do it the second time because she ripped it out, after she got that litre, and then she basically was like, 'Nope, don't touch me again.'"

Colucci said she tried not to get attached to the bear, but admitted it was hard for her and especially the kids, who were already growing fond of the little cub.

"It was adorable. It had these little beady eyes. When I would feed her, I would put a bowl of food near her, and she would drink it, and then when she was done, she would push my hand away, or if she wanted more, she'd actually, like, stick her hand inside the bowl and drag it back towards her with my hand."

Provincial conservation officers took the cub to the zoo on Thursday so vets could treat its wounds. A government spokesperson said it's too soon to say whether the cub will make a full recovery.

with files from Meaghan Ketcheson