Dangerous cold batters Manitoba but there is hope on horizon

The licence plate slogan is Friendly Manitoba, but these days you'd be hard pressed to find someone who isn't spouting a whole lot of profanity.

Temperatures in south should be closer to normal by weekend

The licence plate slogan is Friendly Manitoba, but these days you'd be hard-pressed to find someone who isn't spouting a whole lot of profanity.

The deep freeze that has dug its claws into the province for a week now was at its most frigid Wednesday morning and the entire province was once again under an extreme cold warning.

Not surprisingly, the cold has prompted another round of school closures and bus cancellations across this stretch of frozen prairie.

Although no schools are closed in the Winnipeg School Division, some buses were delayed for up to an hour due to maintenance issues such as buses not starting or breaking down.

See CBC Manitoba's Storm Centre for the latest road conditions, school cancellations, business and community closures, and power outages from across the province. 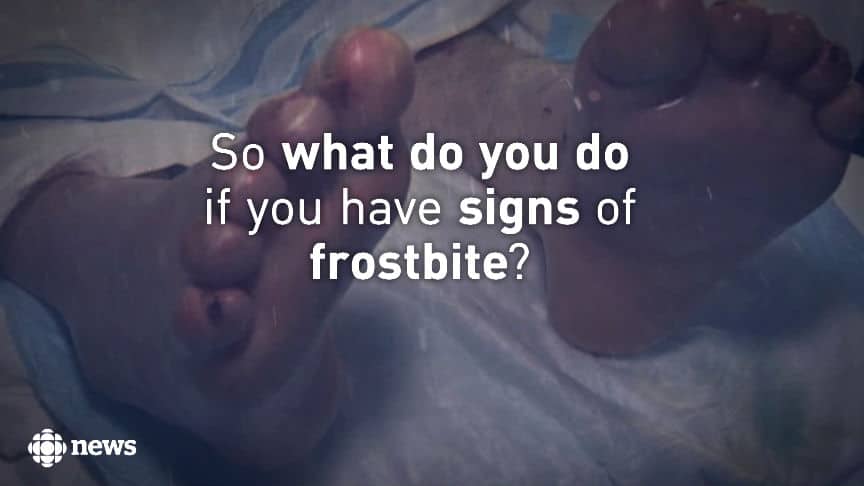 How to identify and treat frostbite

2 years agoVideo
0:59
Bitter cold can cause frostbite in just minutes. Here's how to recognize the warning signs and treat them. 0:59

Daytime highs around –30 C are expected on Wednesday, regardless of whether someone lives close to Manitoba's border with Nunavut in the north or the United States in the south.

But the bitter north wind will make it feel more like –45 to –55. At that rate, frostbite can occur on exposed skin in just two minutes or less, so bundle up if you need to go out.

Denise Morancie, who was waiting for a bus in downtown Winnipeg on Wednesday morning, said she dressed in about several layers "and about four socks" to go out.

Every year they keep saying it's the worst year. But today is the worst.- Denise Morancie

"And I'm still feeling cold," she said. "Oh my god, I'm from the Caribbean and I want to go back."

Morancie has been in the city for about five years and said it hasn't become any easier to deal with the cold.

"Every year they keep saying it's the worst year. But today is the worst," she said.

Caroline Rodriguez, who was also braving the weather at a bus stop, said she was dressed in three pairs of pants, two sweaters, a long-sleeved shirt and her winter coat.

It's terribly cold, yes, but it's not unusual, she said, adding there's no avoiding a stretch like this at some point — so you just have to deal with it.

"If you don't get it in December, you will get it in January or February or March. What do you expect? It's Winterpeg."

As a result of the glacial conditions, CAA Manitoba said it is "experiencing unprecedented call volume and wait times" for people needing a boost or tow for their frozen vehicles.

As a result, the auto association is giving priority to members who are deemed to be in unsafe situations — stranded on the roadside — as opposed to those who happen to be at home and have shelter from the cold.

"Members have the option to call a third-party provider and submit the receipt for reimbursement," states a service alert from CAA.

However, there is hope on the horizon,.

A system tracking across the the western prairies will slowly bring increasing cloud cover overnight and into Thursday, according to Environment Canada.

That means temperatures will gradually begin to moderate from west to east across Manitoba. However, for areas closer to the Nunavut border, the dangerous wind chill values will likely persist into the weekend.

In the south, temperatures through the weekend should be closer to normal for this time of year, which is a daytime high of –11 C and overnight low of –21 C.

"The deep freeze breaks for the weekend. You'll be able to safely get the kids outside for some winter fun," said Sauder.