St. Louis Blues rookie goalie Jordan Binnington is facing an off-ice distraction as he prepares for the NHL playoffs: The emergence of old tweets about women in burkas and a taxi driver speaking a foreign language.

St. Louis Blues rookie goalie Jordan Binnington is facing an off-ice distraction as he prepares for the NHL playoffs: the emergence of old tweets about women in burkas and a taxi driver speaking a foreign language.

On the eve of the Blues' first game against the Winnipeg Jets in the first round of the playoffs, San Jose sports journalists Paul Gackle, a former Winnipegger, brought to light a trio of tweets made by Binnington in 2013 and 2014.

"I was thinking, when people who wear the burkas are at the airport how are people able to see if that's them in their passport," he tweeted in 2013. "Also if you're underage & nervous about getting into a bar, throw the damn burka on. No way the bouncer will get into that awkward questioning."

In 2014, he tweeted "Ya taxi man I'd probably rather listen to the radio than listen to you talk on the phone in another language."

Binnington played a major role in St. Louis' journey from last place in the NHL on New Year's Day to a playoff spot. The rookie went 24-5-1 in 30 starts since Jan. 7, sporting a 1.89 goals-against average and .927 save percentage.

Following a morning skate in Winnipeg on Wednesday, he said his tweets were sarcastic.

"It was a while ago when I was a teenager and it was a little sarcasm, joking around, when I was a teenager. That's what life's about, you live and learn and you grow as a human," said the goalie, who's now 25. "I'm just here to play in the playoffs, a couple of hockey games."

Binnington shrugged off a question as to whether the tweets will be a distraction. Of more concern would be the Winnipeg Jets: on Tuesday, forward Patrik Laine told reporters he would try to make the rookie goalie nervous. 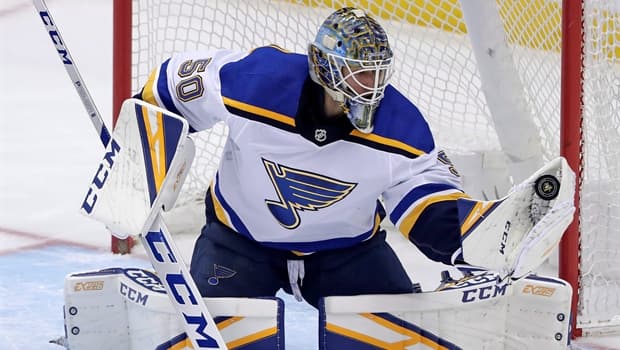 2 years ago
4:35
As the Winnipeg Jets prepare to host the St. Louis Blues in the first game of the Stanley Cup playoffs, CBC News' Karen Pauls reports on the unearthing of controversial tweets made by Blues rookie goaltender Jordan Binnington in 2013 and 2014. 4:35
CBC's Journalistic Standards and Practices|About CBC News